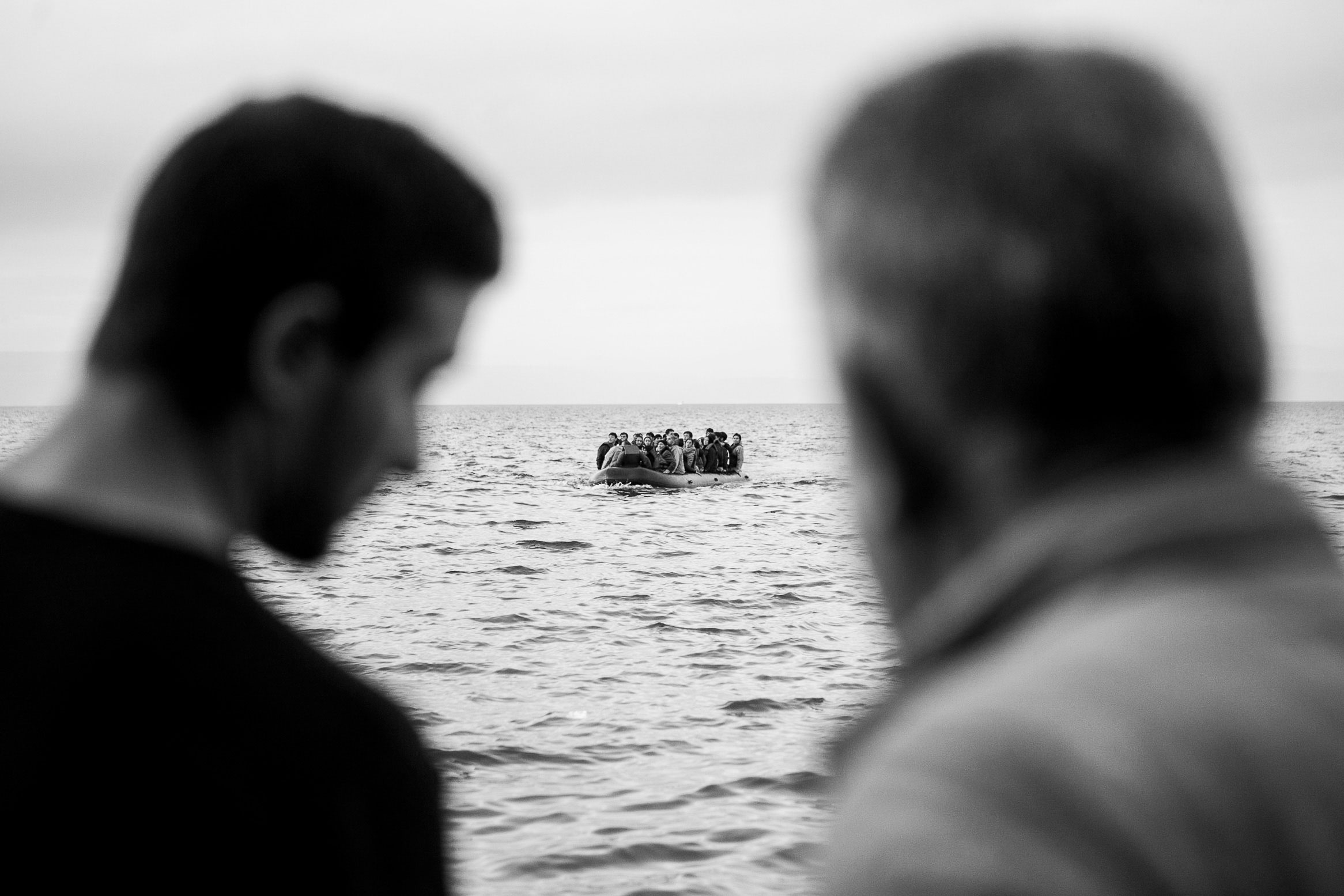 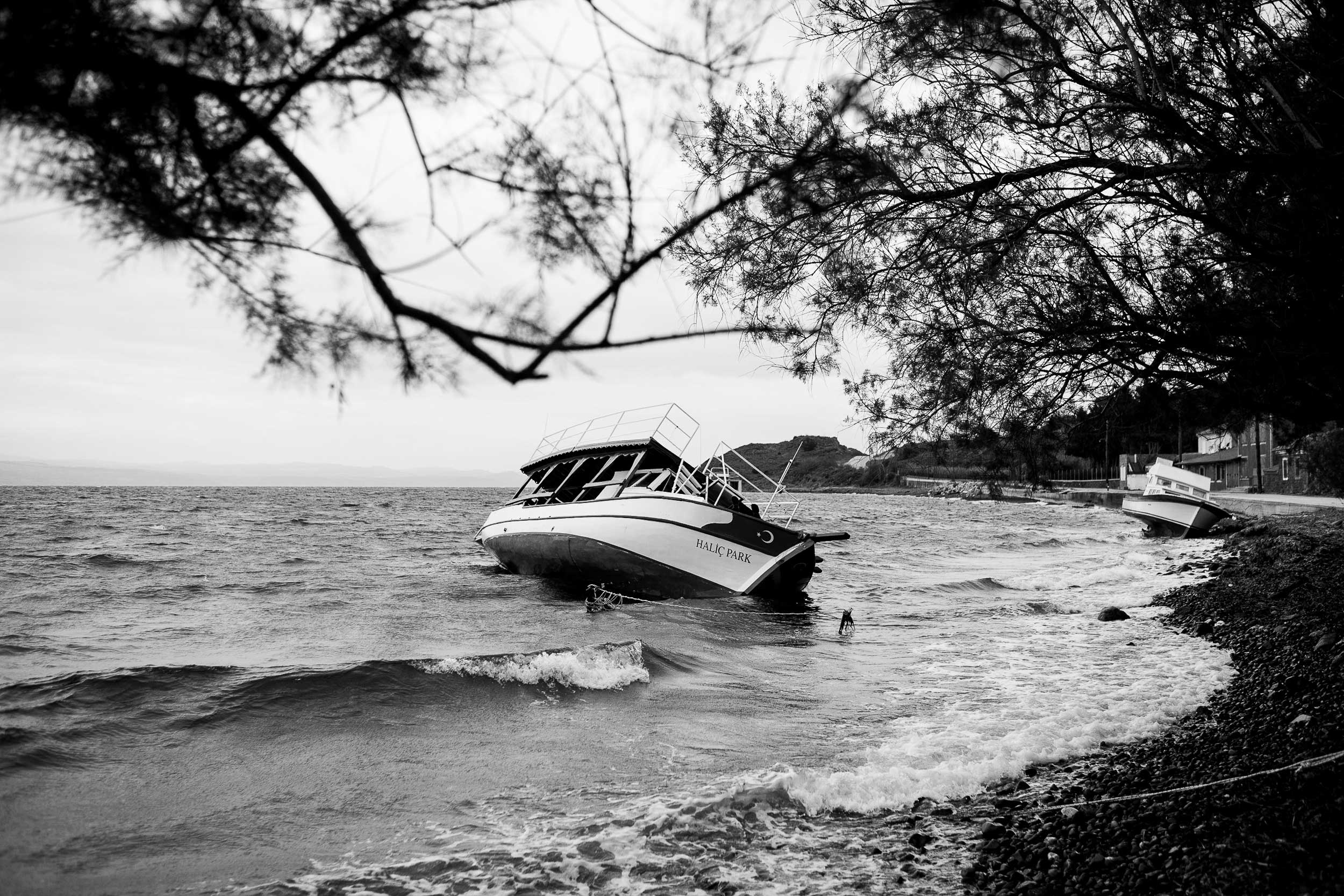 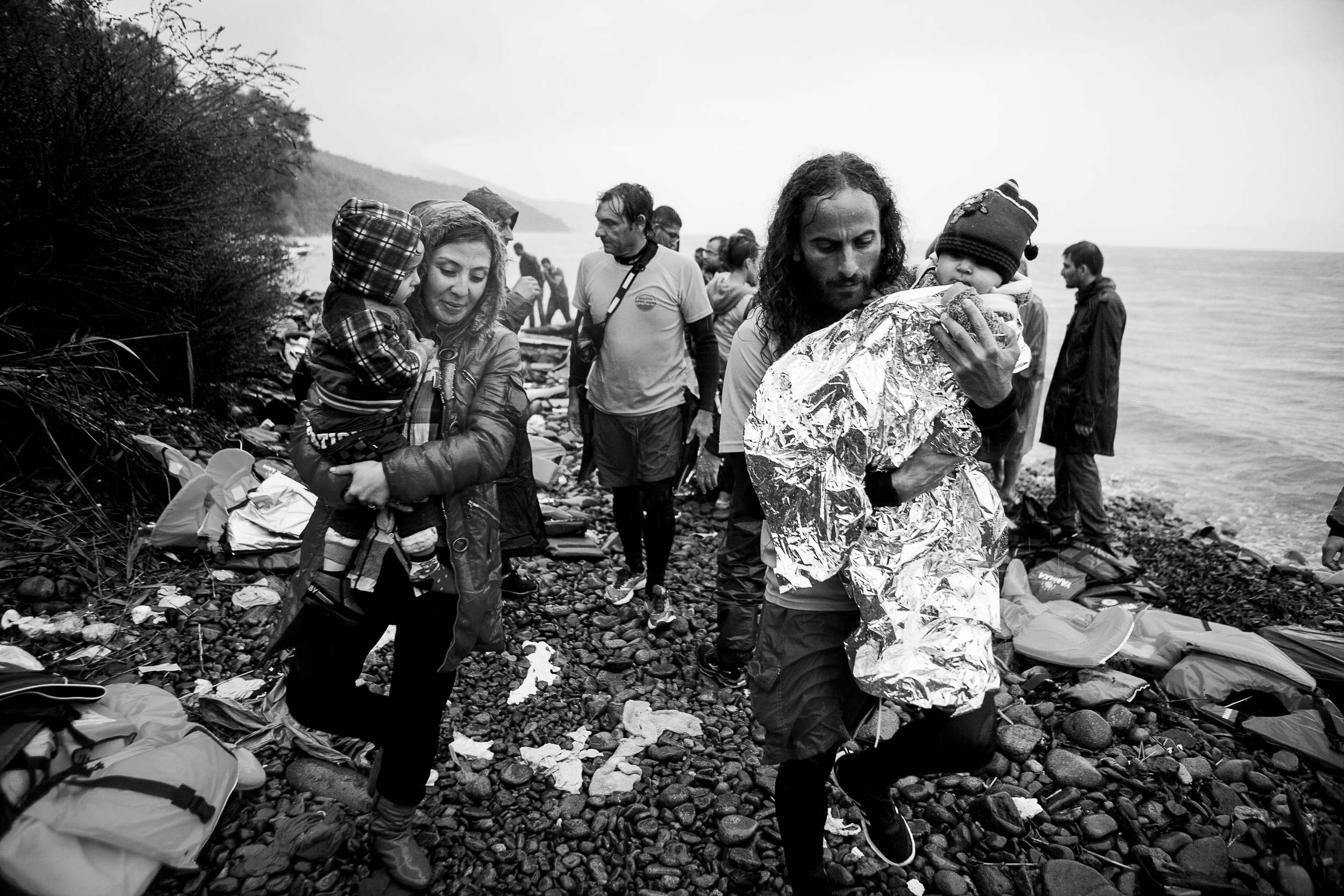 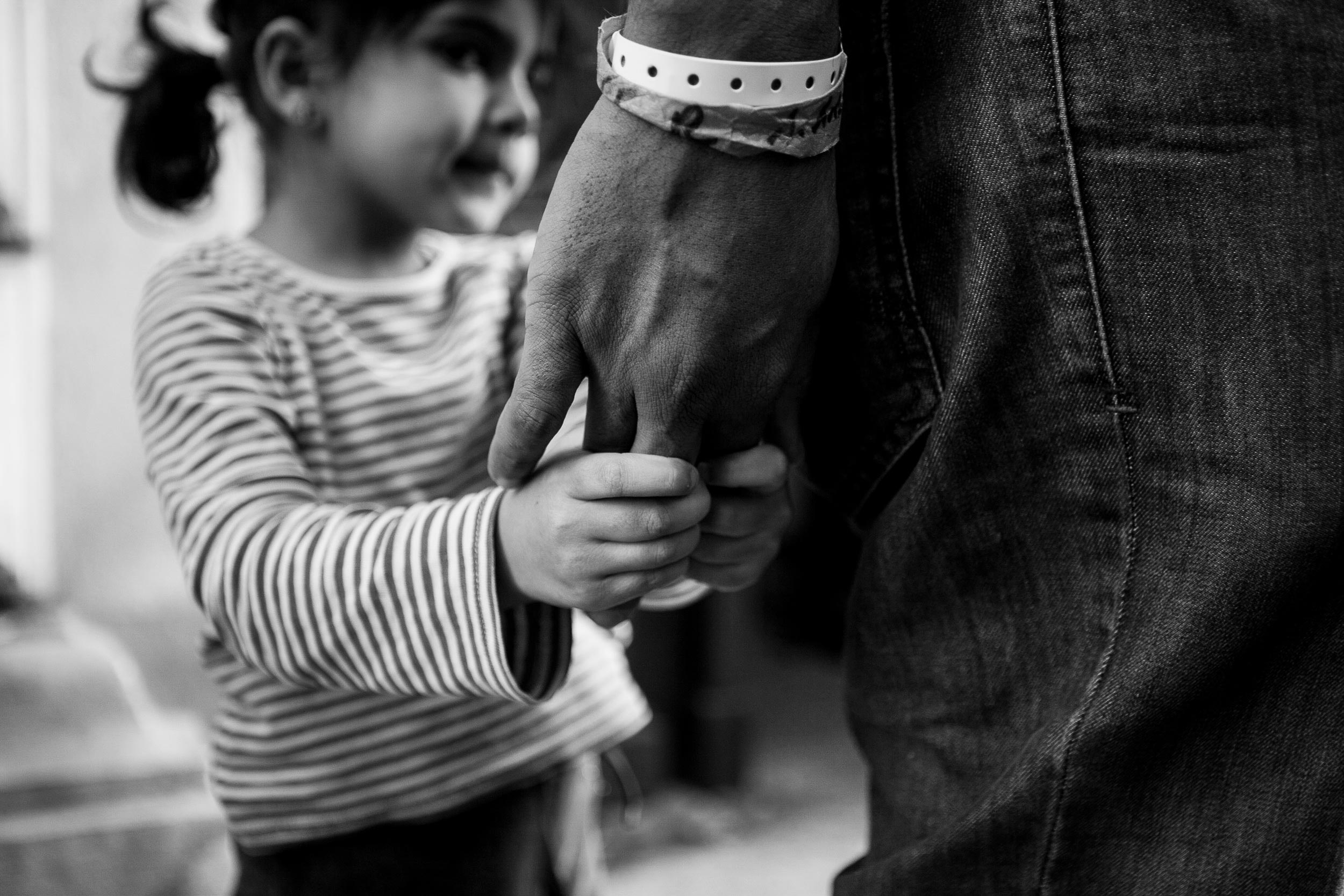 Wesley Verhoeve: Majd, you were born and raised in Aleppo. I imagine that made this experience very personal. Did working on Displaced affect you in the way you anticipated it would?

Majd Taby: This was my first experience with a humanitarian crisis, so I didn’t have many expectations. We only had the conviction that what we were doing was worthwhile. There was also an element of urgency given the fluid nature of the crisis, so we hadn’t done much planning. It wasn’t until we arrived in Greece, the third stop of the trip after Oslo and Turkey, that we had an emotional and physical connection to the crisis.

You hear about crises in the news every day, but they’re not real—they’re words on a screen. To experience the refugee crisis in real life, and in real-time, was a profound experience, one that changed my relationship to the news, because I can now read between the lines.

Being Syrian, the stories I went out to capture weren’t foreign to me. I live those stories with my family. I wanted to bring those stories to an American audience. The most surprising experience for me what the resilience of those affected by the war. We only see the refugees in the news as snapshots in the midst of a crisis. We don’t see them in their downtime as they go about their daily routines. In those down times, they’re normal people, going about normal lives, but carrying with them tragic stories.

Landing, from Displaced: Stories from the Syrian Diaspora.

WV: This was the first time you two worked together. How would you describe your collaboration?

MT: I knew that the photographic aspect of the project was going to be very time consuming, as would the logistical and storytelling aspects of it. We also knew that we wanted the resulting book to have a cohesive voice. As a natural Arabic speaker and the recorder/translator of the stories, I was the gatekeeper to the writing voice. Sara would be much more capable as the gatekeeper of the visual voice. By establishing clear lines of division, we were able to work more efficiently.

Sara Kerens: It was interesting and educational for us both to have different perspectives and previous life experiences. The trip seemed more raw for Majd. I have been on mission trips to help build schools or homes for communities. This was the first time I was in the midst of a global crisis, and something that I could not fix by pouring cement. Over the course of the travel for the project, I felt emotionally guarded in order to process everything that I was seeing and hearing.

WV: Is there a story or moment from the project that moved you most?

MT: One night after dinner in Lesbos, two boats landed around the same time. I offered to help translate for the doctors and the first responders, and we helped people off the boat and up the mountain to the official transit center. One of the doctors was helping a lady sitting next to her husband and carrying a young child. As they got up to leave and join the others walking up the mountain, the husband went to pick up the bag of their belongings, and realized it was wet and torn. The doctor picked up the bag and realized how heavy it was, and told them that they’re going to have to get rid of most of it. The doctor knew that they were on the first night of a multi-day trip, and they wouldn’t have any help or anywhere to store their belongings. I turned on the flashlight on my phone to give them some light, and they picked through the bag, finding the items of highest value to them. They left behind the bag with most of their belongings, the ones they brought from Syria. I was the one who told them to leave that stuff behind, and I’m the one who watched them walk away from it. That experience has stuck with me.

SK: The first day we went to the beach to assess what was happening and get a sense of how the rafts were coming in, how the volunteers handled things, and the basics of how the camp ran to ensure the safety of the many men, women, and children. As we walked up, a raft came to shore. I started photographing the scene, everything happened fast. The divers swam out to pull the raft in safely. I kept shooting. The volunteers removed the children first, then the elderly, then everyone else. One of the volunteers was holding a little boy around 2 years old. She looked around to hand off the child, and I was the only one there. Sometimes there is a difficult line between being present and being a photographer. I stopped shooting and raised my arms out and told her to go. I was holding this little boy that had no idea what was happening. Large, brown eyes looking right at me. He hadn't been changed and smelled of urine and his hair needed to be brushed. He was wearing a tiny life jacket. He never cried. I held him tight and wrapped a mylar blanket around him. I was upset inside. The chatter from news stories in the U.S. and people's fears about helping "these people" were going back and forth in my head and I couldn't take my eyes off this little boy who didn't cry and I stood there holding him for only a few minutes before a nurse came over.

Landing II, from Displaced: Stories from the Syrian Diaspora.

WV: Is there a particularly happy moment you recall sharing with your subjects?

MT: We encountered a wedding! A whole reception at a refugee camp in Vienna. It was a serendipitous and wonderful experience. I won’t ruin the whole story, you can read about it in the book!

WV: Has working on Displaced changed how you view the perception that the

general U.S. population has of the refugee crisis?

MT: This was the original motivation for the project. People don’t realize who these refugees from Syria are. They don’t understand what Syria was like before the war. Remember the “If they can afford iPhones, why are they refugees?” questions? In fact, that question specifically turned me on to the need for this project. The only difference between myself and a Syrian refugee on a boat in Europe was an unrelated decision my father took in 1987 to apply for immigration to the U.S. That’s it. No amount of money or social status would get you a visa in 2015.

SK: Seeing what I did across Europe changed my politics, my views on immigration, and my understanding of the American dream.

Young girl and father, from Displaced: Stories from the Syrian Diaspora.

WV: Do you feel you achieved what you set out to do with this project? What kind of impact do you hope to make with this work?

MT: Well as of this writing the book isn’t released, so I don’t know quite yet. I can say definitely that I’m extremely proud of the quality of photos that Sara captured and the quality of the overall product. I hope people like it! Can’t wait to share it with everyone.

Read more about the stories behind the images, the upcoming Displaced book, and Kerens and Taby at syriandiaspora.com.

Images from “Displaced (A First Look)” will be literally “projected” onto the windows of the ICP Museum from June 26 to July 16 as part of ICP’s Projected series. They will be visible from the sidewalk outside the museum and will be most apparent after sunset.

Related Items
Event ICP Projected: Displaced (A First Look) Event ICP Projected: Hue Don’t Own Me Exhibition Perpetual Revolution: The Image and Social ... Event In Conversation: Thomas Dworzak Interview Thomas Dworzak: “Instagram books” colle...
This website stores cookies on your computer. These cookies are used to collect information about how you interact with our website and allow us to remember you. We use this information in order to improve and customize your browsing experience and for analytics and metrics about our visitors both on this website and other media. To find out more about the cookies we use, see our Privacy Policy.
I Accept I Decline