Thomas Dworzak: “Instagram books” collection | International Center of Photography
Join our mailing list
Stay updated on our latest news.
exhibition
But Still, It Turns: Recent Photography from the World
News
Engage with ICP from Anywhere
News
We Need Your Support
exhibition
#ICPConcerned: Global Images for Global Crisis
event
ICP Talks: Cheriss May on Documenting Democracy
event
ICP Talks: Mari Katayama on “Myself and the Others: Self-Portraits and this World”
Shop Become a Member Support ICP Subscribe Login
ICP's galleries are open for Photobook Festival Saturday and Sunday, May 21 and 22.
View Details
View Details 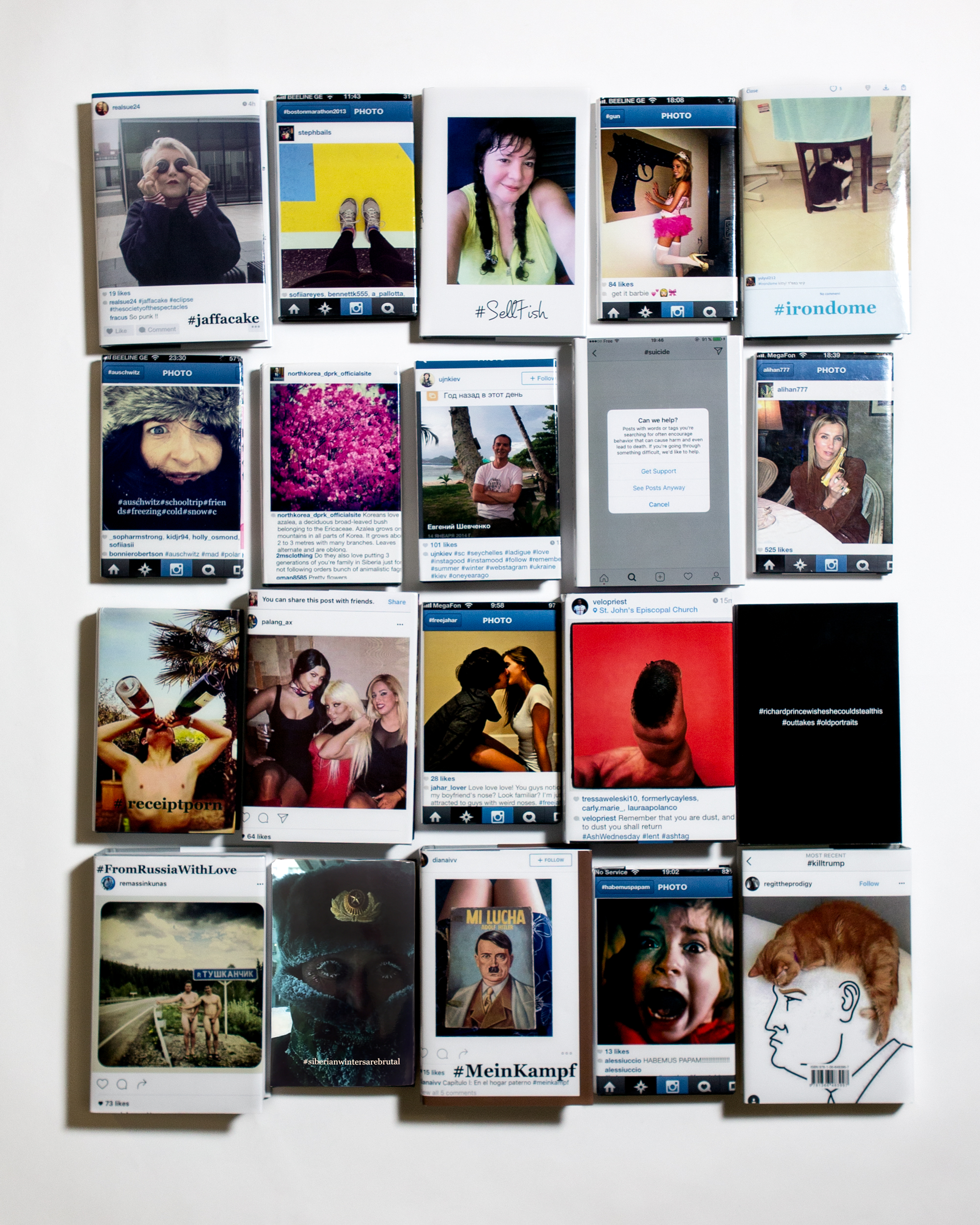 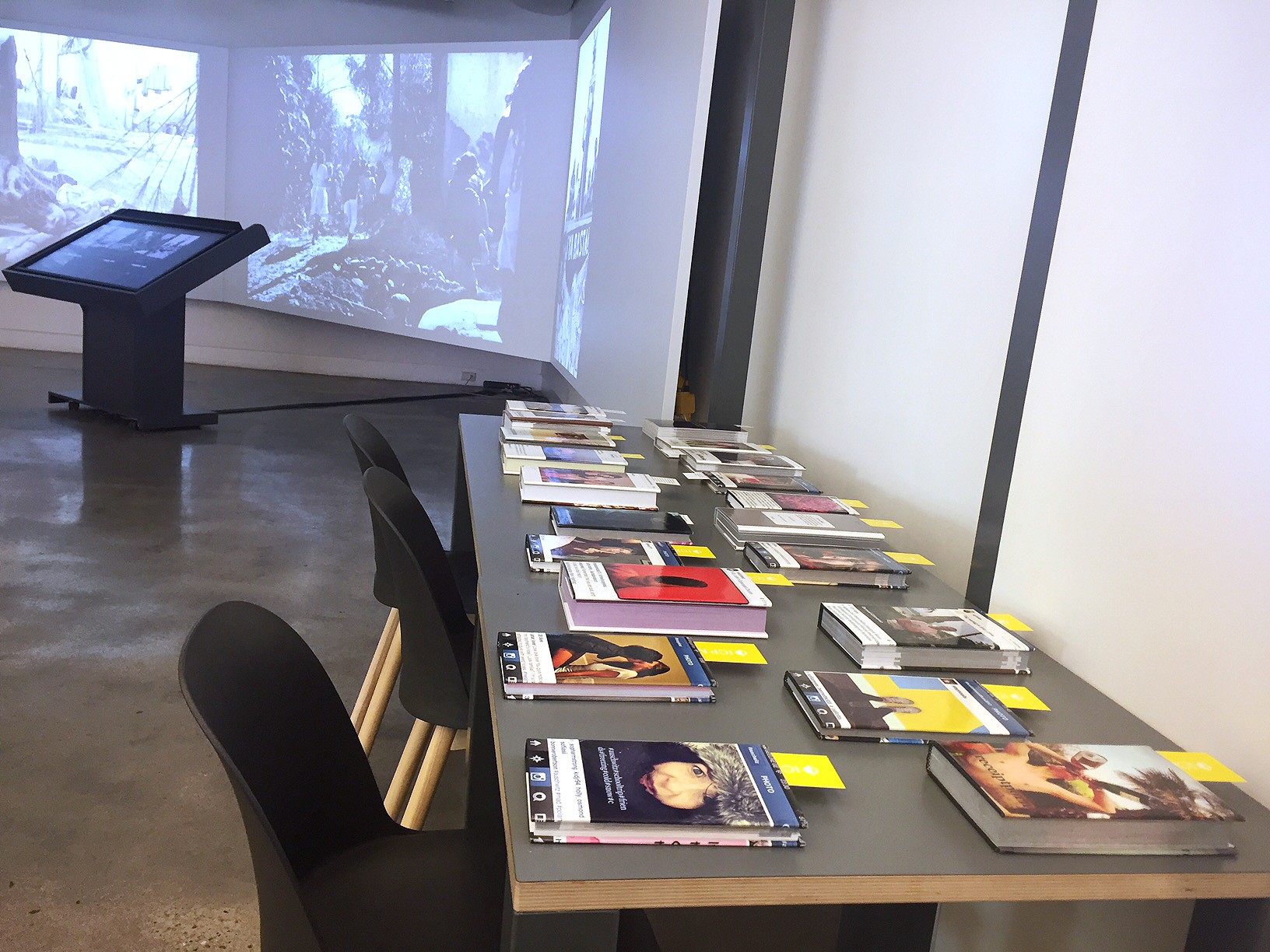 Magnum photographer Thomas Dworzak and ICP Associate Curator Pauline Vermare discuss Dworzak's “Instagram books” collection, which will be featured in the public space of the ICP Museum (250 Bowery) from February 14 to May 7, 2017.
Interview
Pauline Vermare

Thomas Dworzak is a renowned photojournalist and a member of Magnum Photos. Sometime in 2013, when not covering conflict zones and other news, he turned his attention to social media and started compiling “Instagram books.” The series began out of frustration and boredom, and the need to turn the overwhelming digital flow of images into something tangible, physical, printed, and permanent. Over the past three years, the original set of nine scrapbooks became twenty. These volumes address an array of topics, some very serious and others light, all being discussed simultaneously by millions of Instagram users throughout the world. This is the first time that the series has been shown in a museum. The books will eventually become part of the ICP Collections and will be available in the ICP Library.

Dworzak will be a panelist at a discussion of Magnum Photobook: The Catalogue Raisonne on February 15 and will be in conversation with Pauline Vermare on February 21, both at the ICP Museum (250 Bowery).

Pauline Vermare: You are known as a Magnum photographer, a war photographer, a photojournalist, a photographer. . . . With this Instagram books collection, you became a spectator and an editor. When did you start the series, and what triggered it?

Thomas Dworzak: It was sometime in 2013. I was living in the Republic of Georgia. I’m totally behind when it comes to social media. I don’t deal with Facebook, Twitter. . . . But my wife started Instagramming, and one day I also got an account. I hardly used it.

The sudden click was the election of Pope Francis. It all happened in one night. I was lying around, bored on the sofa, remotely bemoaning the fact that I was not running around covering spot news stories at all anymore. And then I started digging on Instagram, #pope, #newpope, and I discovered this whole universe of people all over the world connected by hashtags. #pope became #dope. . . . At first everyone just photographed their TV screens, then themselves smoking dope, then the pope was elected on TV. . . .

PV: What was the original intent of the books, and did it change over time?

TD: It totally started out as a joke, out of boredom. Soon I got hooked and would start hashtag-searching other themes, trying to follow events on Instagram. Sometimes it worked, sometimes there was nothing. But I was really blown away by the insight, rawness, and closeness the pictures offered.

PV: How many volumes did you publish in total, what are the themes, and how did you pick them?

TD: I did an initial set of nine, the sort of “core” set. There are also two sets of three books each on World War I and Ukraine. These were for specific exhibitions, but I don’t want to include them anymore in the “real” series. Only one of the books from the Ukraine commission stays.

I’ve done another ten books of screenshots I was collecting for the last year, but never got around to turning into a book. I must have pictures for about 150 themes. So these last ten books are what I decided to be the most important ones.

For now, I hope that’s it. I have an idea to do something outside the series, and maybe I simply can’t control the urge to continue. But I think I should probably stop it now.

PV: You decided to end the series with #MeinCoif, a volume dedicated to Donald Trump’s hair. Was the accession of Trump to power some form of validation of your original intuition and impetus?

TD: I had kept the last book’s theme open until recently, when in the end I chose the Trump hair one. I had been collecting for a long time and wasn’t sure if I wanted to do it or not. In the end it came out of the moment.

PV: These books are not for sale; they are only meant to be available in libraries and museums, including ICP. How many sets will be created?

TD: Ideally I would like to have five sets: one in each of Magnum’s four offices, and my own set. And then depending on how many institutions would take them, I could make another five sets.

My aim is to make them accessible and give them a place somewhere, like now with ICP. I am very happy that after being shown they will be included in the library. If someone wants to look at them, they easily can.

Since this all comes out of this endless digital flow of images, it is very important for me to turn it back into something tangible, physical, and printed.

PV: Which volume was the most lighthearted and fun to compile?

TD: Probably the solarium one, #russianwintersarecoldandmurderous. Legs, light, colors . . . and the total death penalty for my “reporter” job. It would be impossible to get in there.

PV: Which one was the most painful or disturbing to make?

TD: Definitively #suicide, which also dealt with self-harm by teenagers. I hesitated for a long time, but in the end decided to make it. It just seemed to be such an important topic. I tried to be totally straight, matter of fact, none of the quirky little things I would play around with in the other books. #gun—about teenagers with guns—was probably the most disturbing otherwise.

PV: You were a “voyeur” on Instagram and recently became an active participant. How does it feel?

TD: I think I am still passive on Instagram. I am collecting, hunting . . . that’s what I am interested in. My own Instagram account is of no interest. It’s just the same quirky, ironic stuff—a typical photographer’s account. And that’s whom I follow, my friends and so on. But that is not where my fascination lies.

I keep my account private because I kind of want to keep it personal. But as I said, my own account is irrelevant, like most of the “consciously curated” accounts.

PV: What is your take on the incessant flow of images from social media? How is it helping us and how is it harming us?

TD: I am fascinated. Hooked, addicted. But sure it can drown us. It puts my own role as a real photographer into question. Threatens it at one moment, strengthens it at another. . . . We shall see. . . .

Related Items
Exhibition Perpetual Revolution: The Image and Social ... Event In Conversation: Thomas Dworzak Event Magnum Photos Now—Magnum Photobook: The C... Perspective The Art of Short Form Storytelling: Vine, S... School New Media Narratives
This website stores cookies on your computer. These cookies are used to collect information about how you interact with our website and allow us to remember you. We use this information in order to improve and customize your browsing experience and for analytics and metrics about our visitors both on this website and other media. To find out more about the cookies we use, see our Privacy Policy.
I Accept I Decline