Join us for an evening with Magnum photographer Thomas Dworzak, who will discuss Europa: An Illustrated Introduction to Europe for Migrants and Refugees and his "Instagram books" collection in conversation with ICP Associate Curator Pauline Vermare.

Developed while Dworzak was extensively covering the refugee crisis unfolding in Europe, Europa is a practical manual created to aid and educate migrants re-settling across the European Union. Written in four languages and available at no charge to refugees, migrants, and NGOs, as well as a free ebook download, Europa presents the history of conflict migration while also providing critical educational information to support re-settlement into new communities. Using a Magnum Foundation Emergency Fund Grant, Dworzak traveled through the EU creating a visual survey of practical information, such as cheap supermarkets, public transport, and local food. Europa is included in the refugee crisis section of Perpetual Revolution: The Image and Social Change.

Dworzak’s "Instagram books" collection is a series of 20 scrapbooks compiled thematically using images discovered through various hashtags on the image-sharing network. The books will be featured in the public space of the ICP Museum from February 14 to May 7, 2017.

Thomas Dworzak was born in Germany in 1972. He has covered some of the biggest stories of our times including Northern Ireland; Israel/Palestine; former Yugoslavia; Afghanistan; Iraq; Chechnya; Lebanon; Haiti; Chad; Central African Republic; Ethiopia; Iran; US presidential campaigns; Hurricane Katrina; the revolutions in the former Soviet republics of Georgia, Kyrgyzstan, and Ukraine; DMZ in Korea; Cuba; Colombia; China; Liberia; the Arab Spring in Egypt; the war in Libya; and most recently, the refugee crisis in Europe and the November 2015 Paris terror attacks. In 2000 his dramatic pictures of the fall of Grozny were widely published and received several awards. Dworzak became a Magnum nominee in the same year and a full member in 2004. He is the author of Taliban (2003), M*A*S*H* IRAQ (2007), Kavkaz (2010), and Beyond Sochi (2014). Always an avid collector, Thomas started gathering Instagram screenshots of a variety of subjects and has been grouping them together into ever-growing collections of Instagram artist scrapbooks. In 2016 he developed and launched Europa, an illustrated introduction to Europe for migrants and refugees written in four languages—French, English, Persian, and Arabic—and available at no charge to NGOs, refugees, and migrants.

Pauline Vermare is an Associate Curator at the International Center of Photography. Before joining ICP, Vermare worked at MoMA on Peter Galassi’s Henri Cartier-Bresson: The Modern Century. From 2003 to 2009, she was the head of communications and exhibitions production for Agnes Sire at the Henri Cartier-Bresson Foundation in Paris. From 2001 to 2002, she assisted the head of Magnum Photos’ Paris office, Diane Dufour. As a curator, Pauline has been part of the International Center of Photography’s exhibition department since 2010. She worked on the production of several groundbreaking ICP shows and publications, including The Mexican Suitcase, Elliott Erwitt –Personal Best, Christer Strömholm: Les Amies de Place Blanche,Sebastião Salgado: Genesis, Capa in Color, ¡CUBA, CUBA!, and Public, Private, Secret.

Vermare holds both a Masters of International Relations from the Paris Institute of Political Studies (Sciences Po) and a Masters in Japanese Language and Civilization (Langues’O). 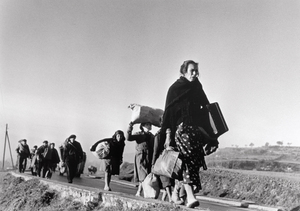 robert capa [Refugees walking on the road from Barcelon...
This website stores cookies on your computer. These cookies are used to collect information about how you interact with our website and allow us to remember you. We use this information in order to improve and customize your browsing experience and for analytics and metrics about our visitors both on this website and other media. To find out more about the cookies we use, see our Privacy Policy.
I Accept I Decline