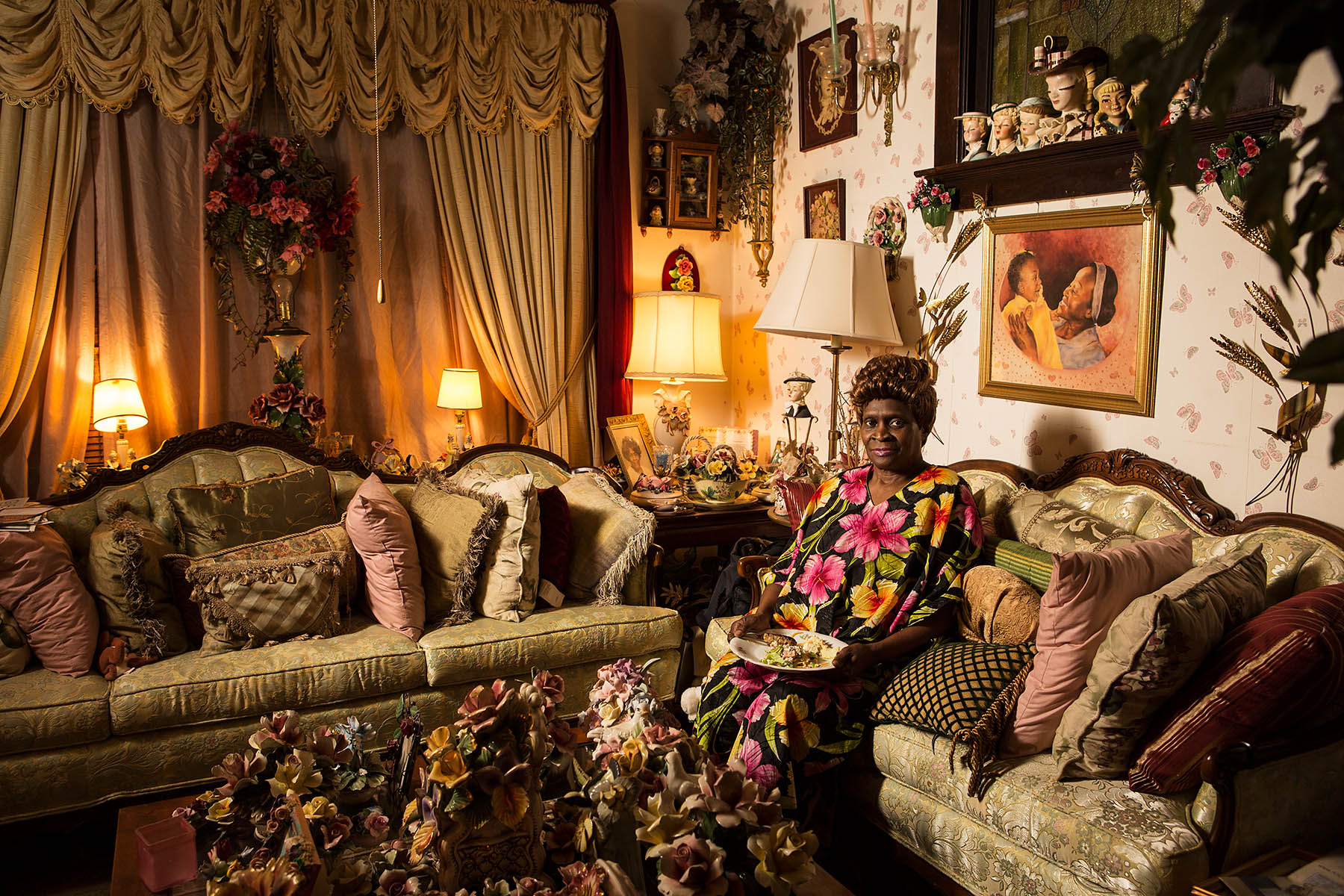 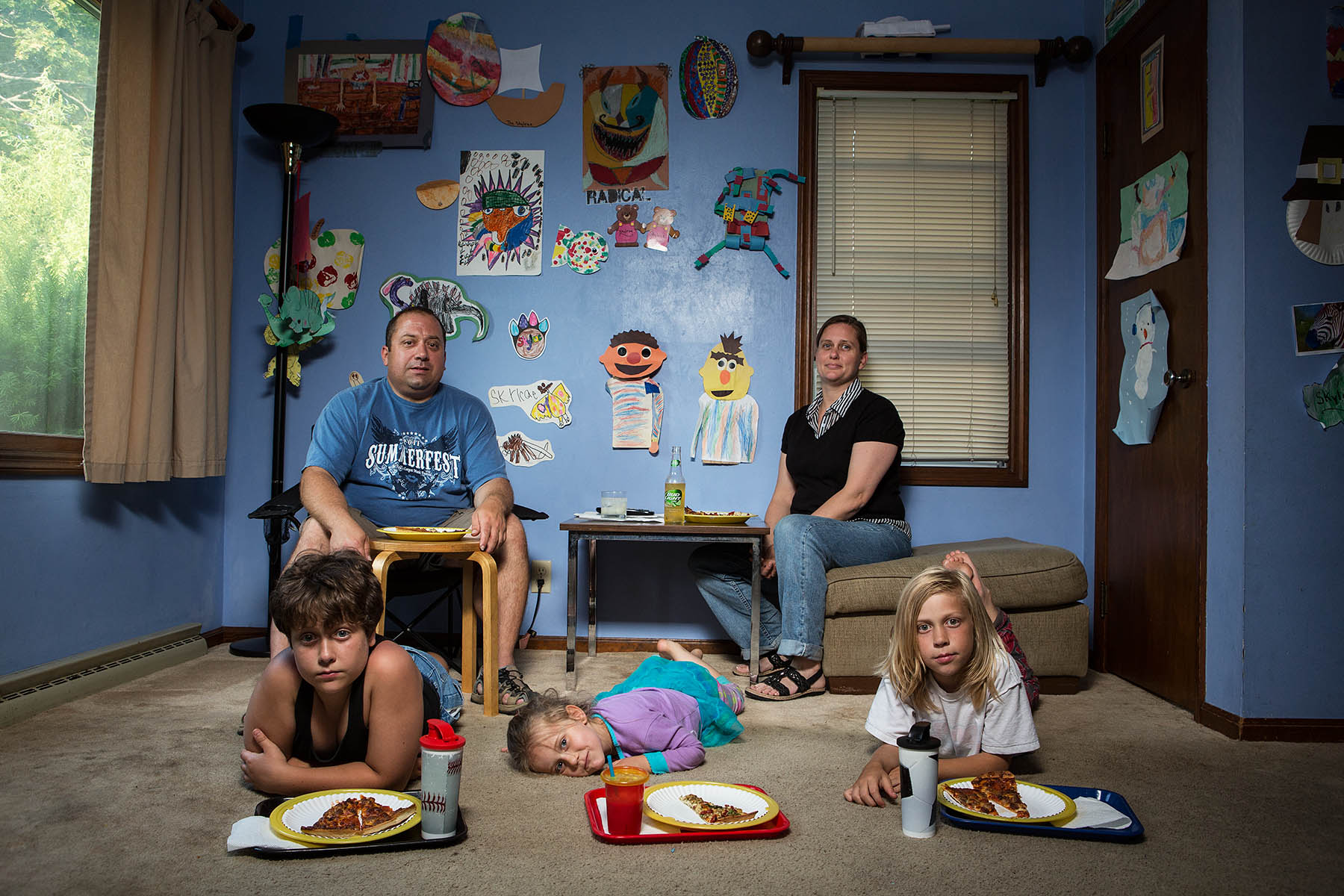 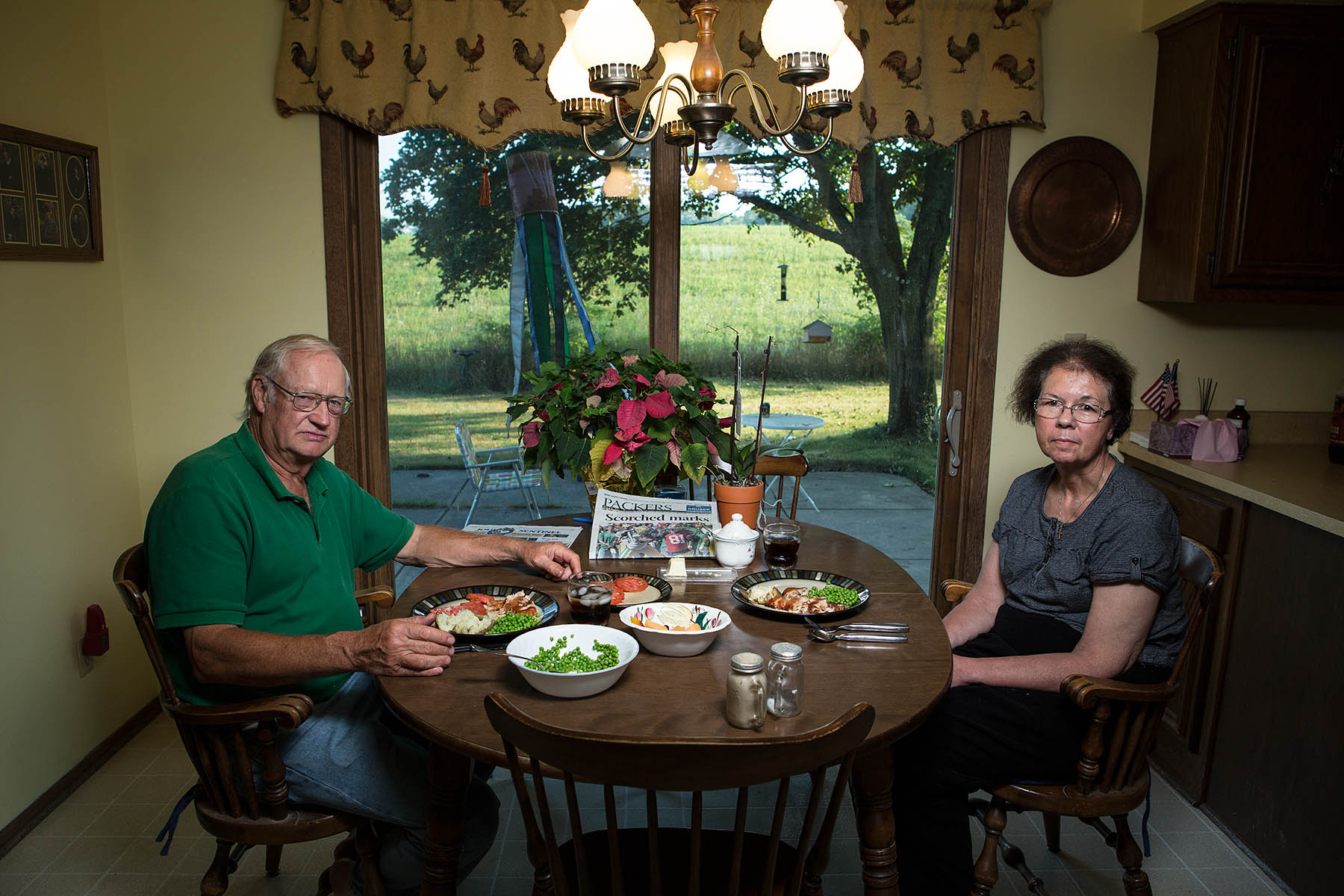 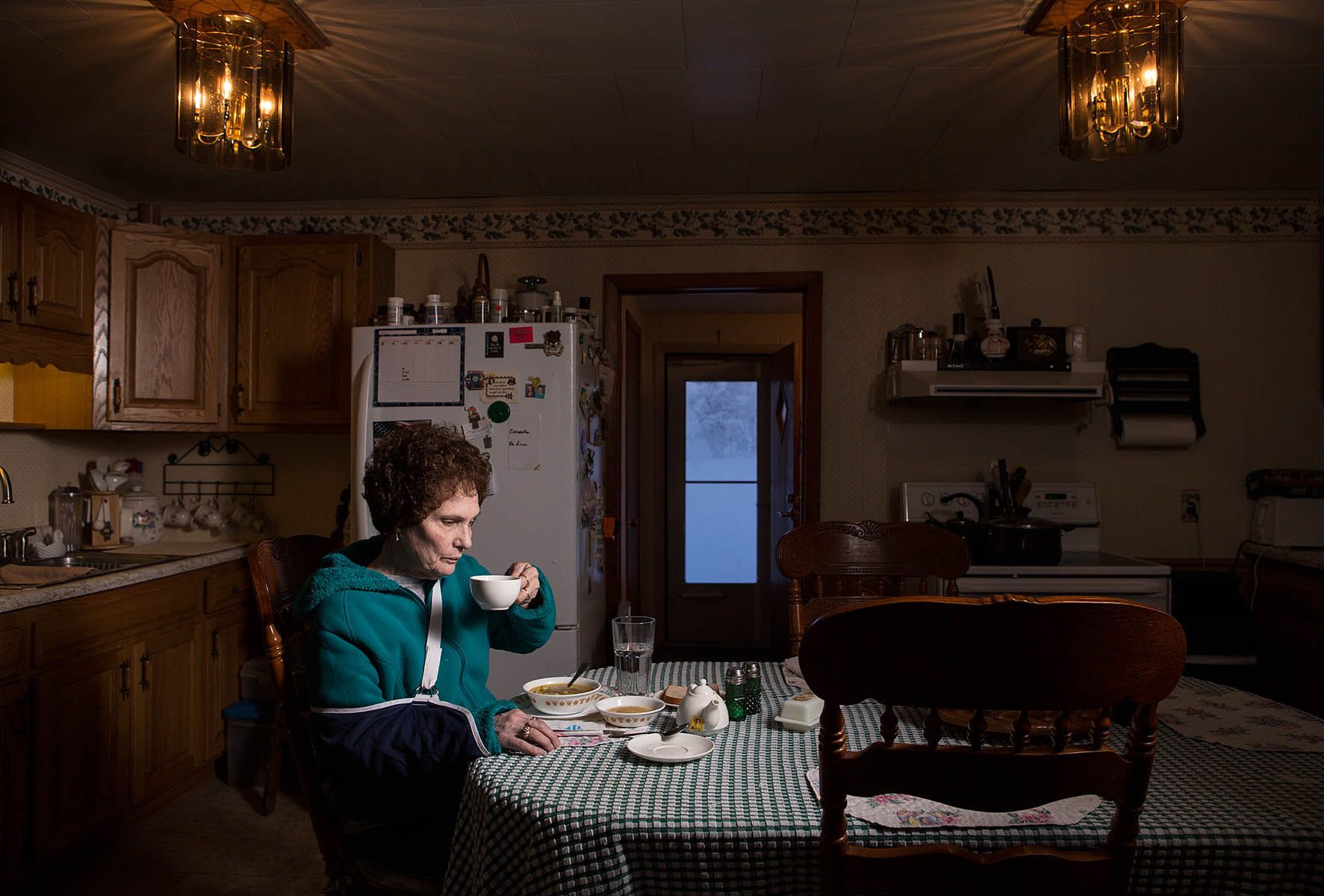 Wesley Verhoeve: How did this project come about? Can you share a memory of a moment where the kernel of the idea popped into your head?

Lois Bielefeld: I’ve always loved food. Growing up, one of my chores was to cook a weekend meal for my family. I could make whatever I wanted but I needed to follow a recipe, write and give my parents the ingredient list, and then make it. My family always ate together for the evening meal (we had to ask to be excused to leave the table). I was less into the actual food until I got older and started regularly cooking and finding my own tastes, but even at a young age I recognized that food brings people together and is a way to explore different cultures.

When thinking about future project ideas, often I’ll have that serendipitous moment of an idea, write it down in my idea journal, and then it will regularly reappear until I recognize it’s the right time to pursue it. I don’t remember when I had the initial idea for Weeknight Dinners but I know exactly when I began to pursue it. In fall of 2012, I started a series about adolescence and teen couples for a fellowship and was really struggling with it. I met with curators and after much thought I decided to shelve the work. I sat back down with my idea journal and decided to pursue the weeknight meal idea.

There is something deeply rooted in the American psyche regarding dinner. The American ideal is to eat a home-cooked meal as a family around a table with no distractions while talking about the day. When thinking about this project I was very interested in this ideal versus the reality. The reality is much different, as evident in a few of my photographs: people eat camped out on the floor in front of the TV, standing at the counter while looking out the window, or sitting at a desk in front of a computer. Another reality is that many people eat alone, which is not always a sad or lonely thing.

In early 2017, this series went viral worldwide and many viewers, projecting their own feelings and experiences on the images, expressed strong responses. For example, seeing an older person eating by him or herself elicited comments about how sad and lonely the person was. Seeing families eat in front of the TV led many viewers to harshly judge other parents and exclaim how their family would NEVER do that. We continue to measure ourselves against the idealized narrative that has been continually reinforced through advertising, television, and movies.

LB: Interesting question. I’ve definitely thought a lot about other people’s habits and evening rituals but I haven’t thought about my own. I think I’m constantly being pulled in two directions on weeknights. One is always being overscheduled with projects, getting to the gym, meetings, and social obligations and the second is being home and fulfilling the roles of being a mother and a wife.

When I’m home, which is probably 50 percent of the week, we are fairly routine. I love to cook whereas my wife, Jackie, sees it as a necessity. She’s a planner and likes to shop for the week ahead of time so she knows what to cook each night and has all the ingredients on hand. When I lived in Brooklyn, I developed a habit of shopping each night on my way home from work and cooking whatever I felt like eating that night. So changing cities and jobs and with whom I live have made for an interesting merge and creation of new habits and approaches.

Back to our routine, usually whoever gets home first starts cooking and then the other one joins. Jackie is vegan so pretty much everything we cook is vegan although we also try to cook meals my 17-year-old, who is usually in the living room doing homework, will eat. We all sit down together at the table and Jackie and I usually split a beer with the meal. I love mealtime—we chat and reconnect and share our day. It’s a moment to slow down and enjoy each other. Then we all clean up. I wash dishes while Jackie puts away leftover food and packs our lunches for the next day. That’s our weeknight dinner…half the time. The other half of the time is we all do sustain ourselves separately due to schedules not aligning. I’ll often pack a sandwich to take with me to eat in the car on the way to a meeting or portrait. Jackie will eat leftovers and my daughter has a habit of heating up refried beans with cheese and eating it with chips.

WV: Have you come across a subject whose weeknight meal ritual resembled that of your family when you were a child? Which one was that and was it different shooting that one than the others?

LB: Regularly there were moments, specific foods, and family dynamics that stirred my childhood memories and nostalgia. For example, some families had taco night with ground beef, chopped tomatoes, grated cheddar cheese out of a bag, and hard corn shells. Several families started their meal with a prayer.

Occasionally, I saw the mother cooking and having dinner ready when the father came home. I also noticed children eating fast and itching to get back to their toys or activities, which I remember vividly as a child. And I noticed the power struggles about children eating foods they didn’t want to but were required to, which I remember circumventing by hiding disdained foods in my napkin.

WV: Did you join any of these meals after taking the shot or were the meals cold by the time the shot was taken? How involved were these shoots, typically?

LB: My process was fairly straightforward. The project was specifically shot Monday through Thursday evenings, as I wanted to capture habits and rituals that are shaped by the weeknight time crunch rather than the weekends when people have more time. I asked my subjects to prepare whatever they normally would for a weeknight dinner—nothing out of the ordinary. But I can’t control how people want to present themselves and occasionally I’d show up and there would be this elaborate meal with a Cornish game hen and fancy bowls with raspberries in it! But this is just as interesting and part of the series—how people want to be perceived as opposed to their reality and normal habits.

I would arrive about 45 minutes to an hour before they planned to sit down and eat. I set up as they prepared their meal; I light where my subjects sit and sometimes the space, although I try to maintain some of the ambient light’s feeling and presence. I’m working quickly, seeing their space for the first time, and usually working from my gut with lighting and camera angle. Some of the portraits come smoothly and some I struggle to get right.

After the lighting and food is ready, everyone assumes their normal dinner position; this could be at a table, it could be on a floor in front of the TV. For this project, I photographed just after they sat down to eat but before they started eating. In between photographs, I ask several questions about their habits. Do they cook, if so from recipes or ad-libbing? Who cooks? Tell me about why they eat here? Do they always eat together? Who does the shopping and meal planning? I find this helps put people at ease and feel more comfortable in front of the camera.

I take 25 to 30 images and then pack up as they resume their meal. After the portrait is done some people would invite me to their table and it was always an honor to partake and share a meal with them. In Luxembourg, this was a treat since temporarily living in another country can be a lonely affair. There is an intimacy in sharing a meal with someone in their home and even more so when it’s a meal that is just their normal routine, not something specially prepared. The food wasn’t cold as I was all set up by the time people sat down and the whole photographing portion took about 10 minutes. It was amusing to photograph and explain to children that they had to wait to eat as they definitely thought it was silly to sit and not touch their food.

WV: The settings in which these were shot are very personal and intimate and based on ritual. These are not usually moments shared with others. I imagine you experienced some interesting moments, ranging in emotion. Is there a shoot or moment that you recall being particularly interesting or moving that you can share with us?

LB: Dinner can be a wonderfully intimate time…it can also be a time fraught with stress and tension. When sharing this work with others I love how it elicits the viewer’s own memories and nostalgia. One woman in her fifties spoke about her and her sister always giggling and having bubbly warm dialogue together with their mom at the table when they were young. The laughter would stop when they realized their father was glaring at them and they were silenced for the rest of the meal. She said this was a regular occurrence growing up.

I did witness a few stressful family interactions where I considered packing up my equipment and returning another evening but also I wonder if things were tempered due to my presence.

Conversely, a family that I warmly remember both photographing and then joining their table was this spirited single mother of two teenagers in Luxembourg. The entire meal was filled with laughter, storytelling, sweet teasing of each other, and shared responsibilities. There was such an incredible close kinship and warmth in this family. For a brief bit I felt a part of their family and longed for my own family to have similar dynamics.

WV: What is next for you? Are you working on another new projects?

LB: I’m actively working on three different series. Since June 2015, I have been working on a series, Neighborhood, about people and the immediate walkable space by their homes. Currently, there are 99 portraits in the series including animal portraits. At the beginning of the year I photographed 28 new portraits (many of whom I have photographed for previous projects such as Weeknight Dinners) over two weeks in Texas, Louisiana, Oklahoma, and Arkansas. I work in series because I love to see the similarities and differences in people within a commonality—we all eat and make spaces that are our own.

Earlier this summer, I re-embarked on the teen couples series I shelved back in 2012. I’ve made four portraits thus far and am currently looking for interested subjects. I’m also doing audio interviews with my subjects about their relationships and perceptions of love. I’m quite excited about this new series. I’m sure it has much to do with the fact that I have a 17-year-old daughter.

The third series is a collaboration with interdisciplinary artist Nirmal Raja. Born in India, Nirmal has amassed over 200 saris as they are an integral part of her culture, but living in Milwaukee she rarely wears them due to both internalized social pressures and practicality. We make portraits of Nirmal wearing a sari in different places throughout Milwaukee, ranging from the Wisconsin State Fair to the local grocery store. This work speaks to the reclamation of personal identity during this very precarious political time period.

Weeknight Dinners is on view at the ICP Museum from October 9 through 15 as part of ICP’s Projected series. During the day, the work is presented on monitors inside the ICP Museum and during evening hours, images are literally “projected” onto the windows of the ICP Museum; they can be viewed from the sidewalk outside the Museum and are most visible after sunset.