A talk with Sheila Pree Bright, an acclaimed photographer who, in recent years, has documented responses to police shootings in Atlanta, Ferguson, Baltimore, Washington DC, and Baton Rogue, which inspired her series #1960Now. In this discussion, Pree Bright will speak about her short film and the Instagram incorporated in its making. #1960Now is featured in the current ICP Museum exhibition, Perpetual Revolution: The Image and Social Change.

Sheila Pree Bright is a fine-art photographer known for her photographic series, Young Americans, Plastic Bodies, and her most recent project, #1960Now, which was featured at the Museum of Contemporary Art Georgia in 2015. Bright earned an MFA. in photography from Georgia State University and received the Center Prize from the Santa Fe Center of Photography for Suburbia. Her work was featured in the documentary Through the Lens Darkly: Black Photographers and the Emergence of a People. Bright has exhibited at the High Museum of Art (Atlanta), Smithsonian Anacostia Museum in Washington, DC, the Art Gallery of Hamilton (Ontario, Canada), and the Leica Gallery in New York City. Her work is in many private and public collections, including part of the Library of Congress, Washington DC, Wadsworth Atheneum Museum of Art (Hartford, Connecticut), and Sprint PCS Art Collection (Overland, Kansas). 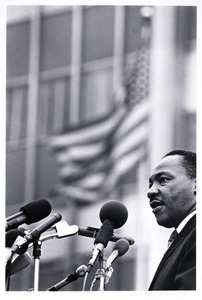 benedict j. fernande... Dr. Martin Luther King, Jr. addresses the c...
This website stores cookies on your computer. These cookies are used to collect information about how you interact with our website and allow us to remember you. We use this information in order to improve and customize your browsing experience and for analytics and metrics about our visitors both on this website and other media. To find out more about the cookies we use, see our Privacy Policy.
I Accept I Decline