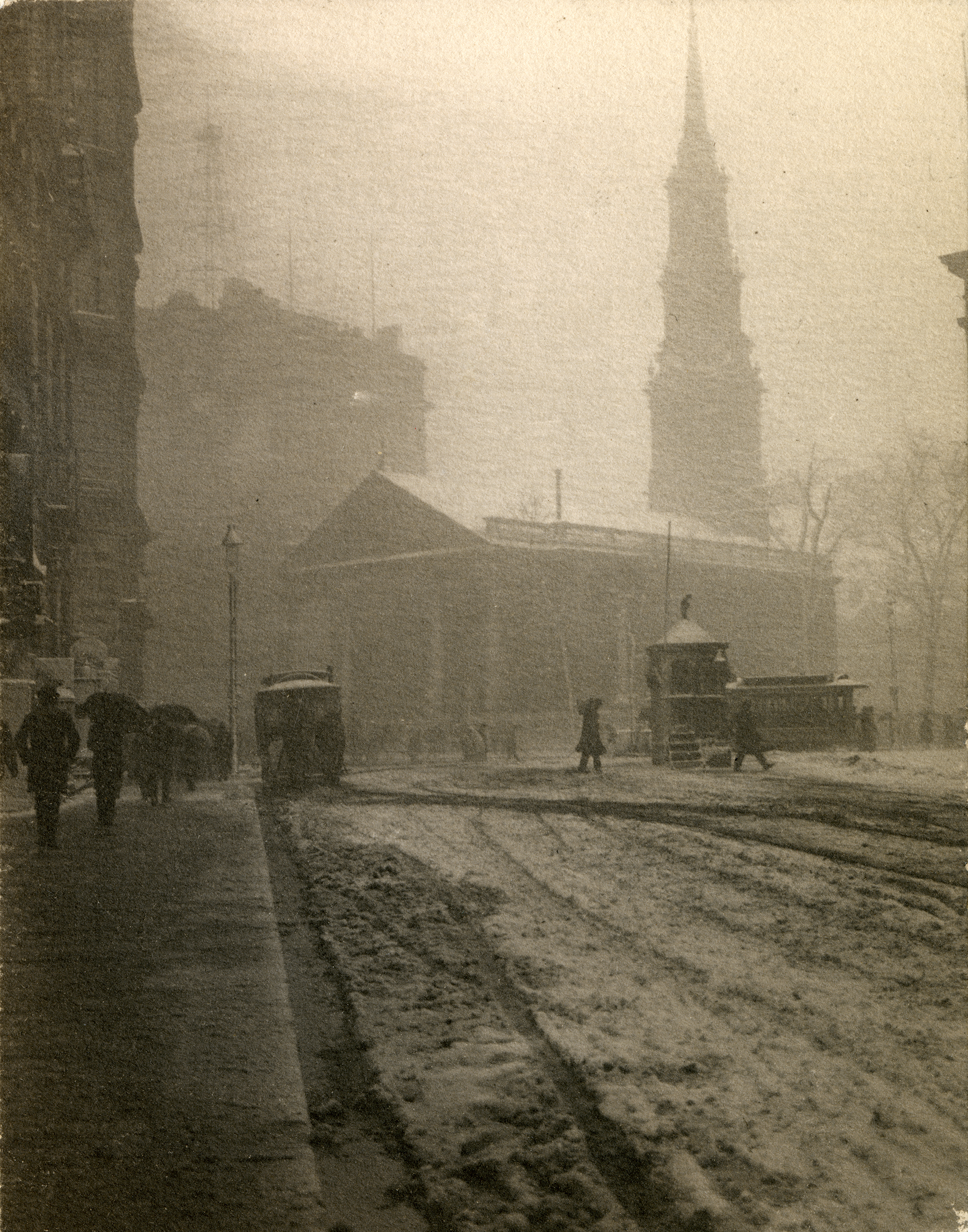 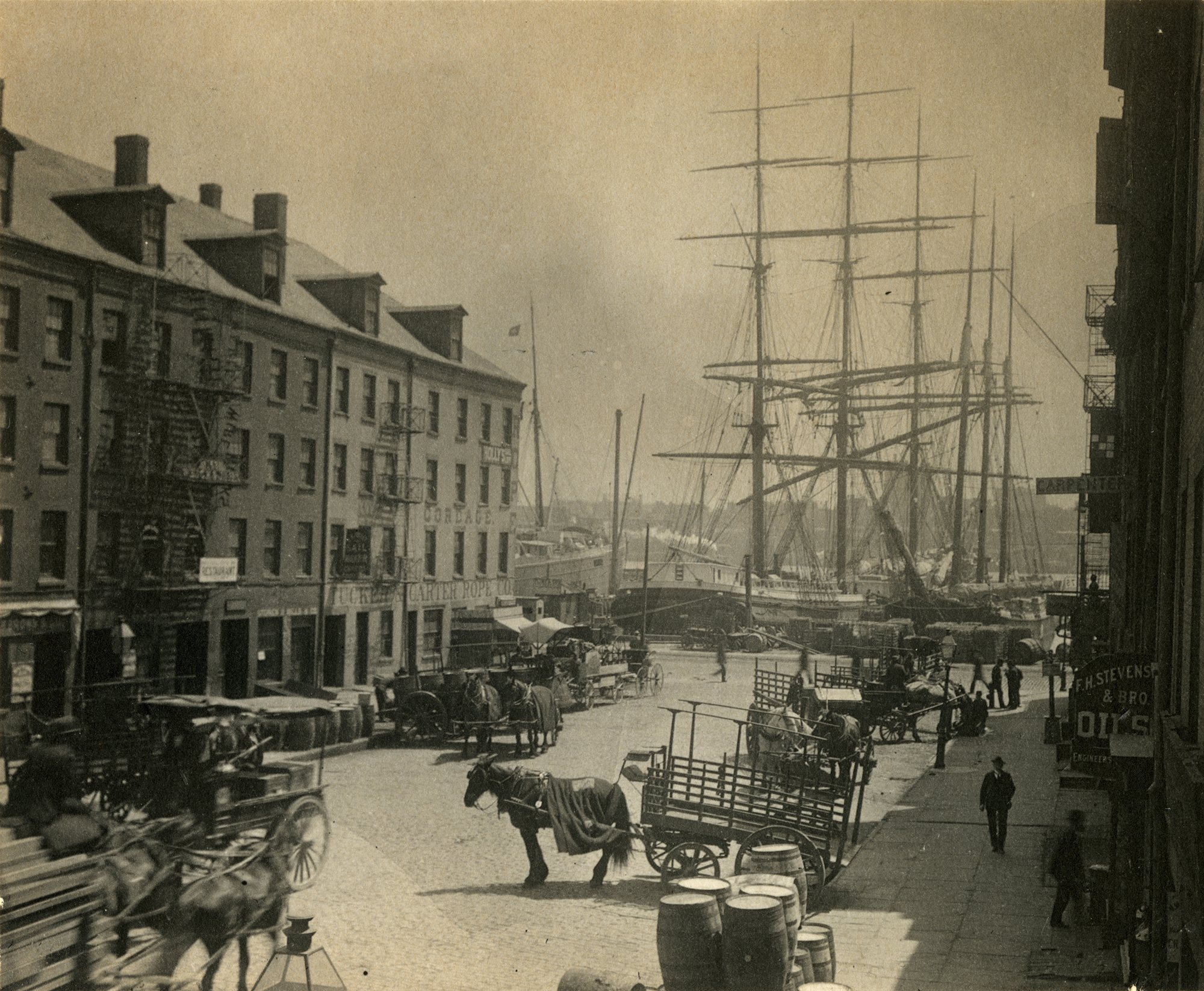 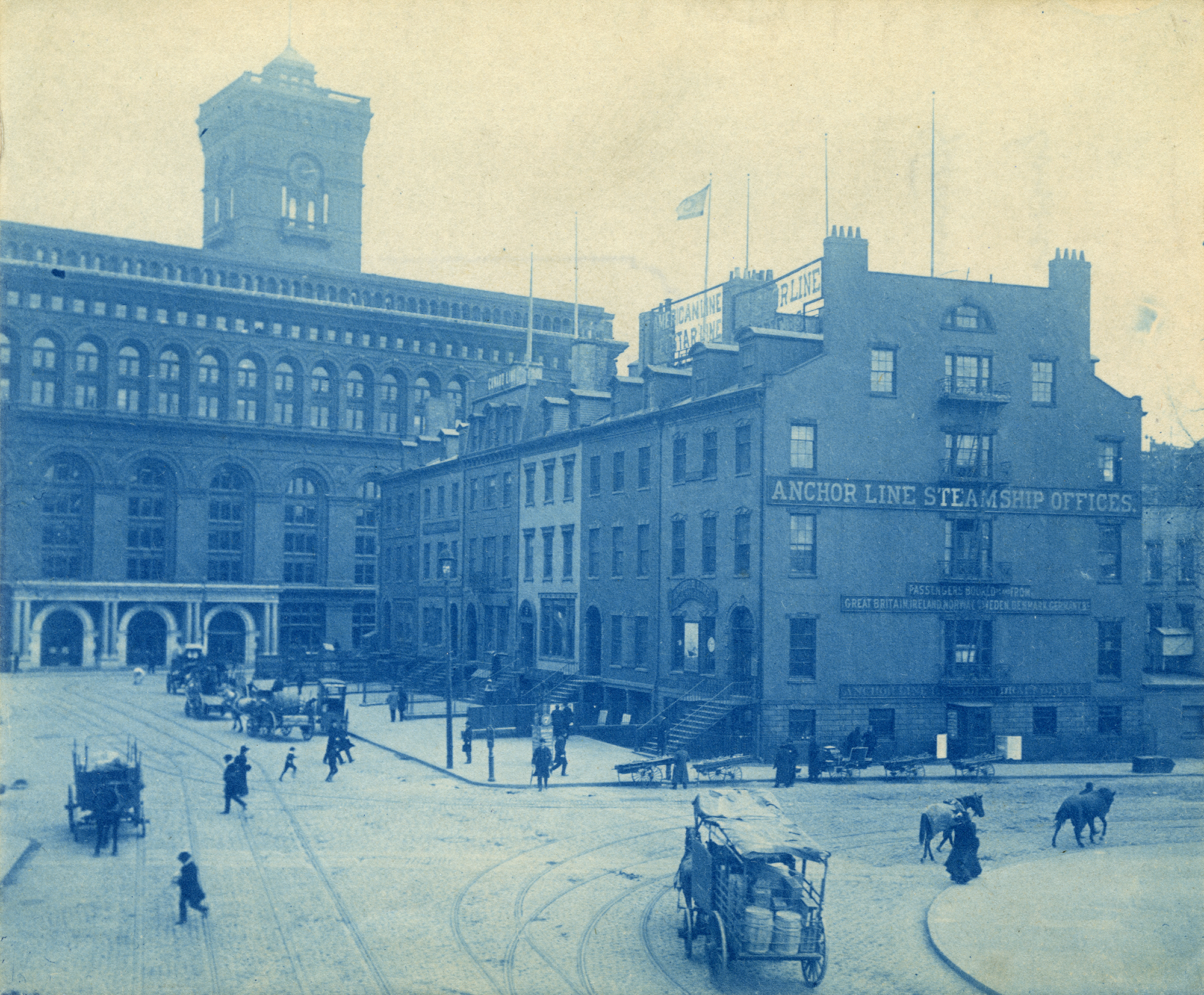 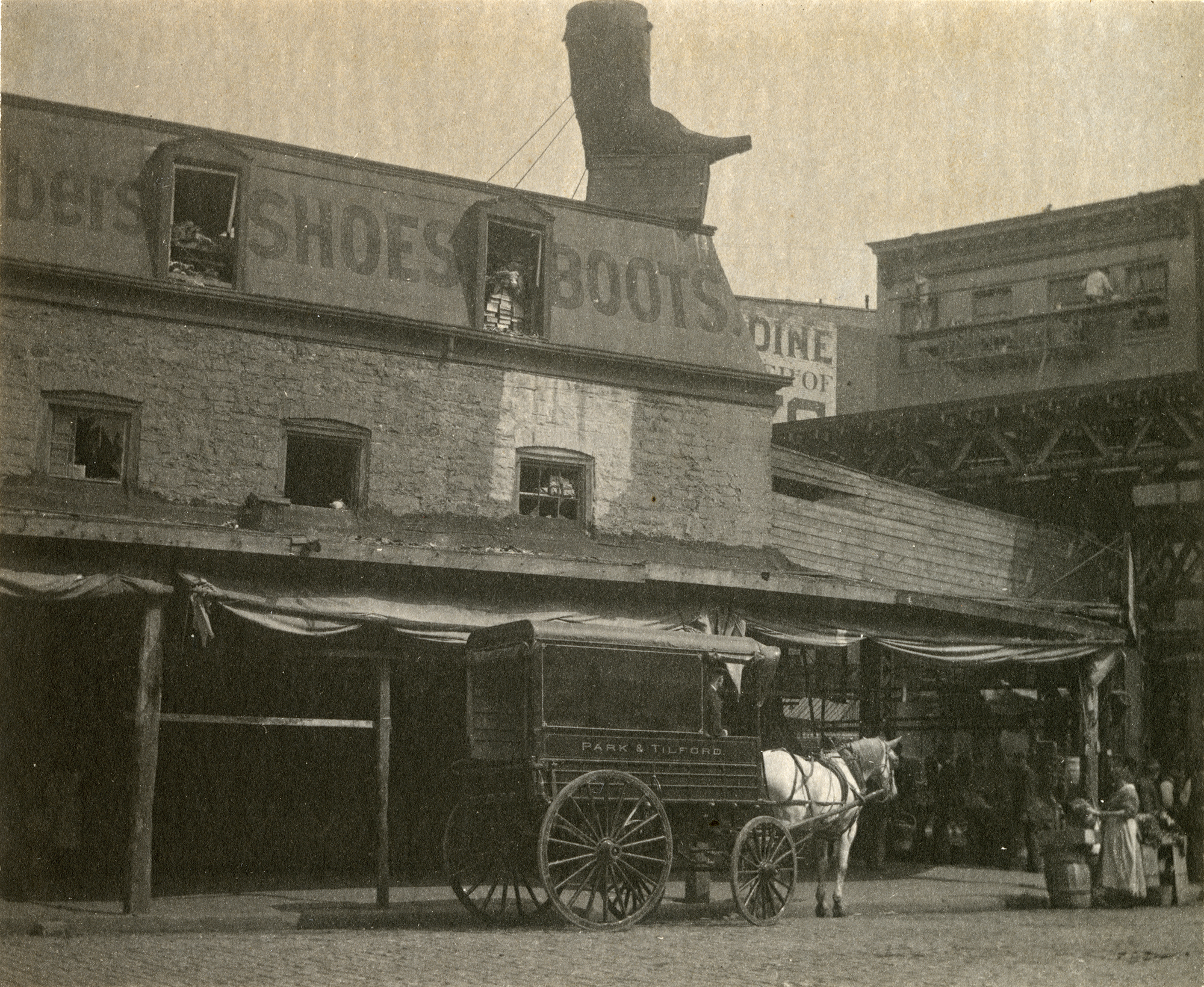 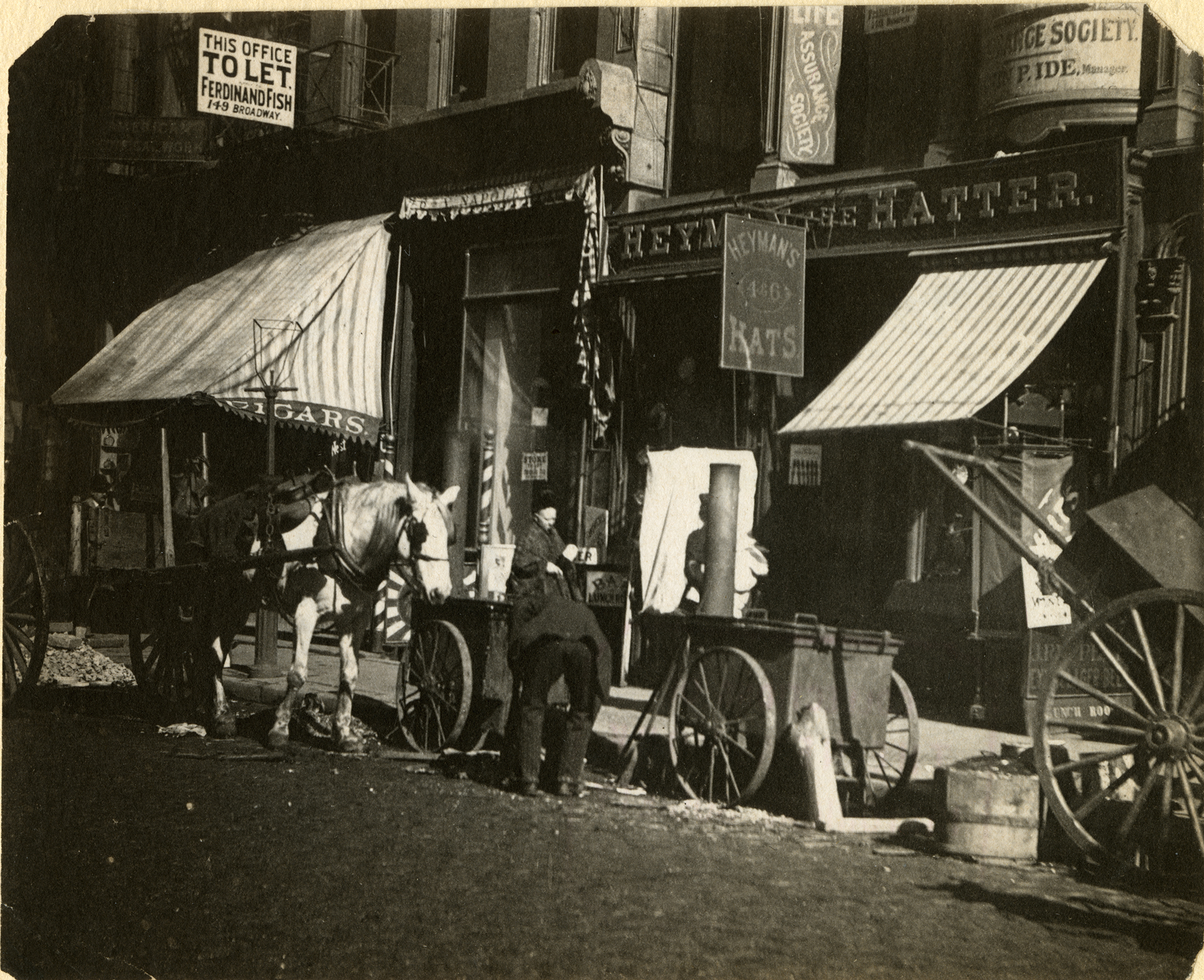 It was Baudelaire who first recognized the city's propensity for drama. The way it offered public spaces for private matters. He understood, too, that the city was the nexus of the modern, the place where life was at its richest and most diverse. Like Dickens he saw the city itself as a character, a gigantic inhuman life form, something photographers, too, often feel intuitively. From fairly early on many photographers realized that their medium was the ideal chronicler of urban life. Charles Gilbert Hine certainly did. A photographer I had never heard of, I discovered him and his work in the New York Historical Society.

There are few places left in New York where one can escape the 21st century, even the 20th for that matter. With its long wooden tables and stained glass windows, its Corinthian columns and general air of quiet contemplation, the library of the New York Historical Society is one of them. To walk into this library is to enter one kind of time capsule; to open up a box of photographs is to enter another. Carefully watched over by the guardian angels of the library (who release them into one's hands box by box only after the most careful and strict of admonitions) were a half a million photographs. In search of photographic treasure, I had no idea where to begin but when I stumbled across Hine's images in the library's database, I knew I had found what I was looking for.

A brilliantly gifted amateur who worked in New York in the latter part of the 19th and early 20th centuries, Hine set himself the task of photographing the streets and buildings and people of the city, his exquisite, small platinum, cyanotype, and albumen prints filled with its vitality.

People from the past are actors on a distant stage, yet in old photographs they often seem to have the breath of life still in them. Like figures silhouetted against the light at the end of a long tunnel, they are both far away and crystal clear. Charles Gilbert Hine's prints, with their sharp diagonals leading us deeply into pictorial space, reinforce the feeling of entering a theater where a drama is about to begin. Beautifully set and illuminated, the scene is ready; a hush is on it, especially in the moodier and more poetic images, each one a magic box, a kaleidoscope of miniature lives.

A keen feeling for the intrinsic geometry of the city and for the way light coats a scene in mood and rhythm infuses his work. This is not an empty city, but one filled with people as well as architecture, the whole thing staged in Renaissance perspective. Sometimes mere streaks of tone, his small figures, like those in a Canaletto or a Guardi, are energetic and expressively alive.

While there is a painterly quality inherent in work that continues such Renaissance traditions, Hine's images are direct, with no manipulation of the print surface. Straight photographs, reasonably sharp and filled with urban happenstance, they seduce us into searching every corner for small surprises.

In the countryside everything seems of a piece; in a city like New York incongruity is the rule. Things come out of nowhere. A peculiar sign, a head sticking out of a window, a child running, the barrels and the tall ship's spars, the horse and the cart, the man strolling, the three little figures in the background, the women in their shawls and the men in their round bowler hats—everything participates in these theatrical urban moments.

In a cyanotype print the streets are dusted with a light snow; cool blue tones envelope the scene, deepening the chill. There is a sharp wind and the flag blows straight out at a 90 degree angle. A child dashes across the street while the horses look exhausted. Empty carts line up in front of the Anchor Line Steamship offices and everywhere men go about their business dressed for the bitter New York winter.

In another image a bearded man leans out of the Park and Tilford van on the passenger side. The white carthorse looks reasonably fit and stands out against the darker tones of the image. In the upper right hand corner two men on a scaffold work on a building, painting or repairing it. At the top is this strange caterpillar like shape, a part of a ship perhaps, adding an element of the surreal. A woman standing next to a barrel seems to be offering something. At any rate she is not going anywhere, just standing with her arm out. The whole thing is beautifully composed of rectangles and squares, triangles and circles, each containing an area of tone that plays across the image like notes on a piano, the photograph resonating with their music.

Even more emphatically musical is the Broadway of Heyman's Hats. It seems as if every square and polygon has been placed precisely to catch a certain key of light. Offsetting them are circular wheels, triangular awnings, and a bold, diagonally placed sidewalk on which a lady walks and against which horses and carts lean. On a white sheet hanging behind a cylindrical pipe is a mysterious shadow, and everywhere the city sends out little messages on signs of all sizes. This urban symphony in geometry is concrete, not abstract, specific not generalized, and often in motion. A man is caught in an awkward posture, bending down and presenting his backside; like Winogrand three-quarters of a century later, Hine is indifferent to the elegant pose.

Though the life contained in photographs is as illusory as it is precious, no arguments about photography's subjectivity, that it necessarily presents a skewed and distorted version of reality, diminish the medium's ability to capture the power and presence of the thing. Hine's photographs with their combination of stillness and motion, the architectural and the human, have this thereness, this quality more easily experienced than defined.

Despite his pictorialist affinities, his embrace of awkwardness as well as grace, of unexpected disjunctions as well as expected harmonies, Hine’s work is photographic rather than painterly. His openness to the moment and to the quirky idiosyncrasies of urban life, unexpectedly contemporary in outlook.

Lastly, while lacking the range of his illustrious French contemporary, Eugène Atget, we find a similar attitude of homage—that same appreciation of the specifically urban, a realization of the city’s great power along with its wealth of detail and its endless interest for the perceptive observer.

Ultimately, Charles Gilbert Hine is more than an interesting period photographer; he is an interesting photographer, pure and simple. The impressive mass of work he left behind deserves to be better known and appreciated. Fortunately for us, the New York Historical Society has a great deal of it and its doors are open to all. 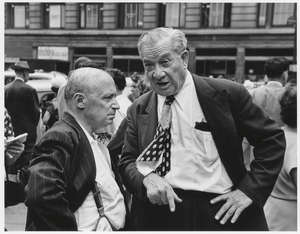 dan weiner 34th Street, New York City
This website stores cookies on your computer. These cookies are used to collect information about how you interact with our website and allow us to remember you. We use this information in order to improve and customize your browsing experience and for analytics and metrics about our visitors both on this website and other media. To find out more about the cookies we use, see our Privacy Policy.
I Accept I Decline