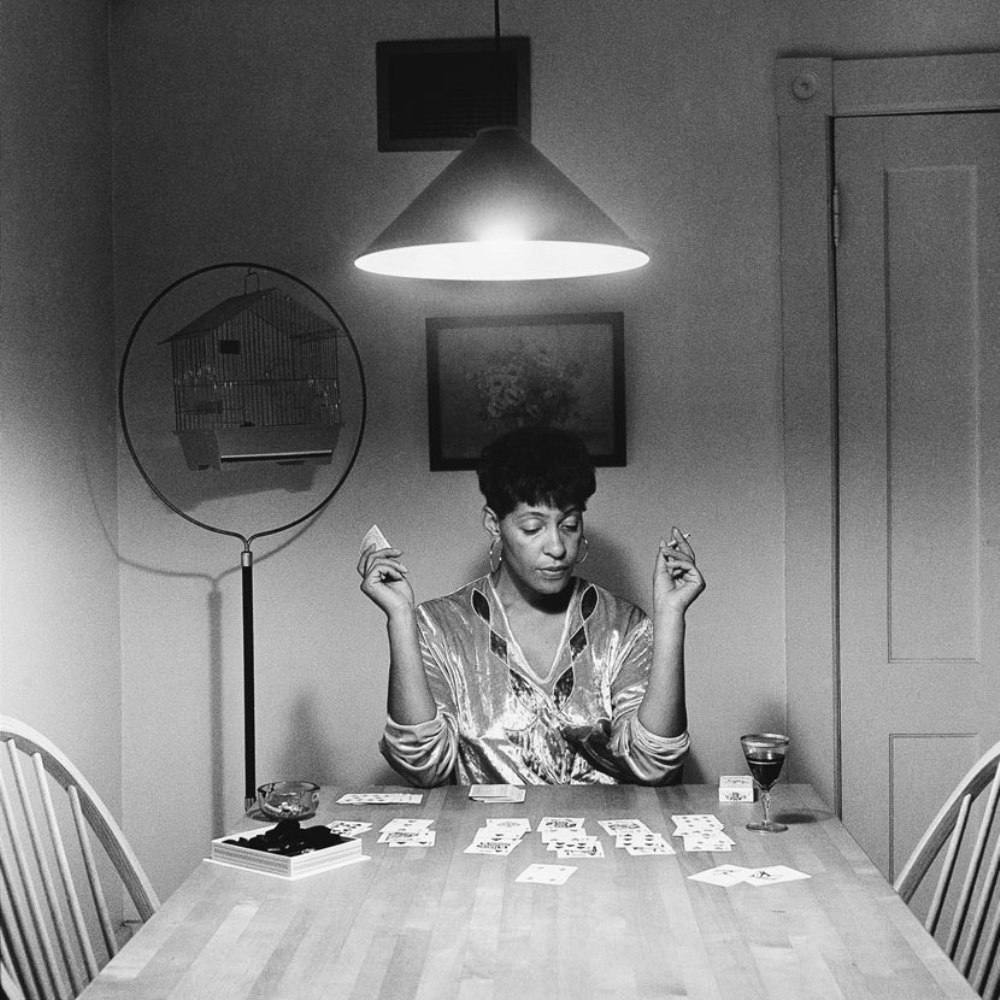 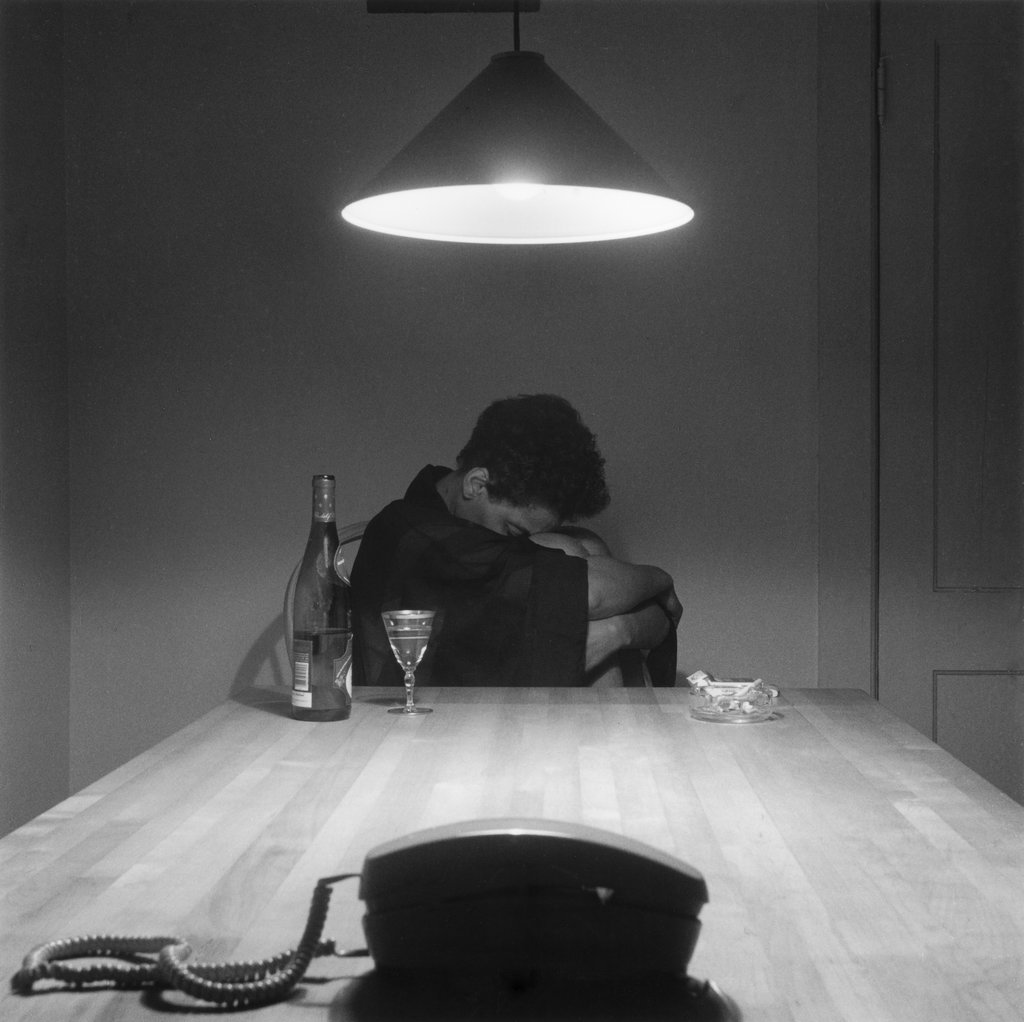 What Will Suffice: Alfred Corn on Carrie Mae Weems

Among the most thoughtful African-American photographers is Carrie Mae Weems, whose work began to be noticed in the early 1980s. One key project was her black and white platinum-print Kitchen Table series (1990), which used the minimal stage set of a table and three chairs under a suspended lampshade in a small room with a closed door in the background. The term "stage set" fits because the pictures were consciously and deliberately posed, with the photographer herself figuring in most of them. So we have to assume that a time-lapse device was used in the pictures where Weems appears, introducing a small element of chance and the likelihood that several shots were discarded before she arrived at the definitive images.

Of course in most homes, the kitchen table is the main forum for family discussions, the scene where relationships are enacted and the pulpit from which life lessons are delivered. It also has a social aspect, and in some of the pictures other adults and children appear. If each of the four sides of the table is presumed to have a chair, then the camera clearly sits in the un-pictured fourth chair. This makes the viewer an invited but invisible guest. Weems's room lacks a window and, though the door suggests an exit or even an escape, in none of the pictures is it open, a fact contributing to the rather claustrophobic feeling of this small space. The conical lampshade reminds you of similar fixtures in the interrogation rooms of city police departments—also, it’s the sort of lampshade many photographers’ studios typically use.  In most of the pictures the actual bulb is covered, but in a few, a sliver of it is brightly and intensely visible, perhaps as a reminder of enlightenment or else cross-examination. Electric light is aimed down at the table surface much as a camera lens's light source is trained on the photographic plate. "Camera" originally meant "room," so Weems's stage set also performs as an analogy for the photographic process itself—black and white, chiaroscuro, obscure and clear.

The series achieves its full effect only when seen in its entirety, but single components in it repay close inspection and provide, singly, a sufficient artistic experience.

None of the individual pictures in the series was given a name, so they have to be identified by their contents. The image considered here shows an attractive female subject (performed by Weems herself) alone at the opposite end of the table, her facial expression alert but not troubled. She wears gold hoop earrings and a patterned caftan while she plays a game of solitaire. Propped on elbows, both hands lifted, her left holding a cigarette, and her right, the next card to be played. The word “solitaire” sums up the solitary evening she is spending, her consolatory comforts including the card game, a cigarette, a glass of wine ,and a Whitman's Sampler box of chocolates. It's a realistic scene, reminding us of one of Cindy Sherman's "movie stills" series. But Sherman's stills, to judge by clothes and makeup, belong to fiction film from an earlier period, probably the late '50s or early '60s. Part of their interest is the palpably fictional and retro feeling they emanate. By contrast Weems’s scene would qualify as a "still" from a contemporary documentary.

A couple of extra props not found in most of the series' other pictures play a role here: a framed flower painting on the wall behind the subject's head, and a birdcage. This prop might remind the viewer of Maya Angelou's memoir I Know Why the Caged Bird Sings, which would suggest that the woman here is a captive at home, alone. But there is no bird. Has it escaped? Does the woman hope and expect to capture some other bird to replace it? The question goes unanswered. But we might compare this picture with another in the series, again showing a solitary woman, this time with her face buried in her arms, and only four objects on the table: a telephone, an ashtray, and an open wine bottle next to a half-filled glass. It's a scene of acute loneliness, a woman waiting for some long-desired phone call.

In the picture we've been examining, the game of solitaire and the framed painting could be interpreted as signs for Weems's own artistic quest. In the absence of other actors, wine and chocolate her only companions, Weems is alone with her attractive and absorbing work. If you like, you can regard this scene as her own private communion. In priestly robes, she celebrates a solitary Eucharist at the kitchen table of her art. Wallace Stevens said the task of poetry was to find "what will suffice." In this photograph, Weems has found (and celebrated) an artistic self-sufficiency.

Alfred Corn’s eleventh book of poems, titled Unions, appeared in April 2014. He has published a novel, titled Part of His Story; two collections of essays; and a study of prosody. He provided an introduction for Aaron Rose Photographs (Abrams, 2001) and has written extensively for Art in America and ARTNews. Prizes for his work as a poet include the Guggenheim fellowship, the NEA, an Award in Literature from the Academy of Arts and Letters, and one from the Academy of American Poets. He has taught creative writing at Yale, Columbia, and UCLA. In 2011 Pentameters Theatre in London staged his play Lowell’s Bedlam, and in 2013 he was made a Life Fellow of Clare Hall, University of Cambridge, where he worked on a translation of Rilke’s Duino Elegies. This past November, Eyewear published his second novel, titled Miranda’s Book.

Artist Carrie Mae Weems Event ICP Spotlights: Carrie Mae Weems
This website stores cookies on your computer. These cookies are used to collect information about how you interact with our website and allow us to remember you. We use this information in order to improve and customize your browsing experience and for analytics and metrics about our visitors both on this website and other media. To find out more about the cookies we use, see our Privacy Policy.
I Accept I Decline