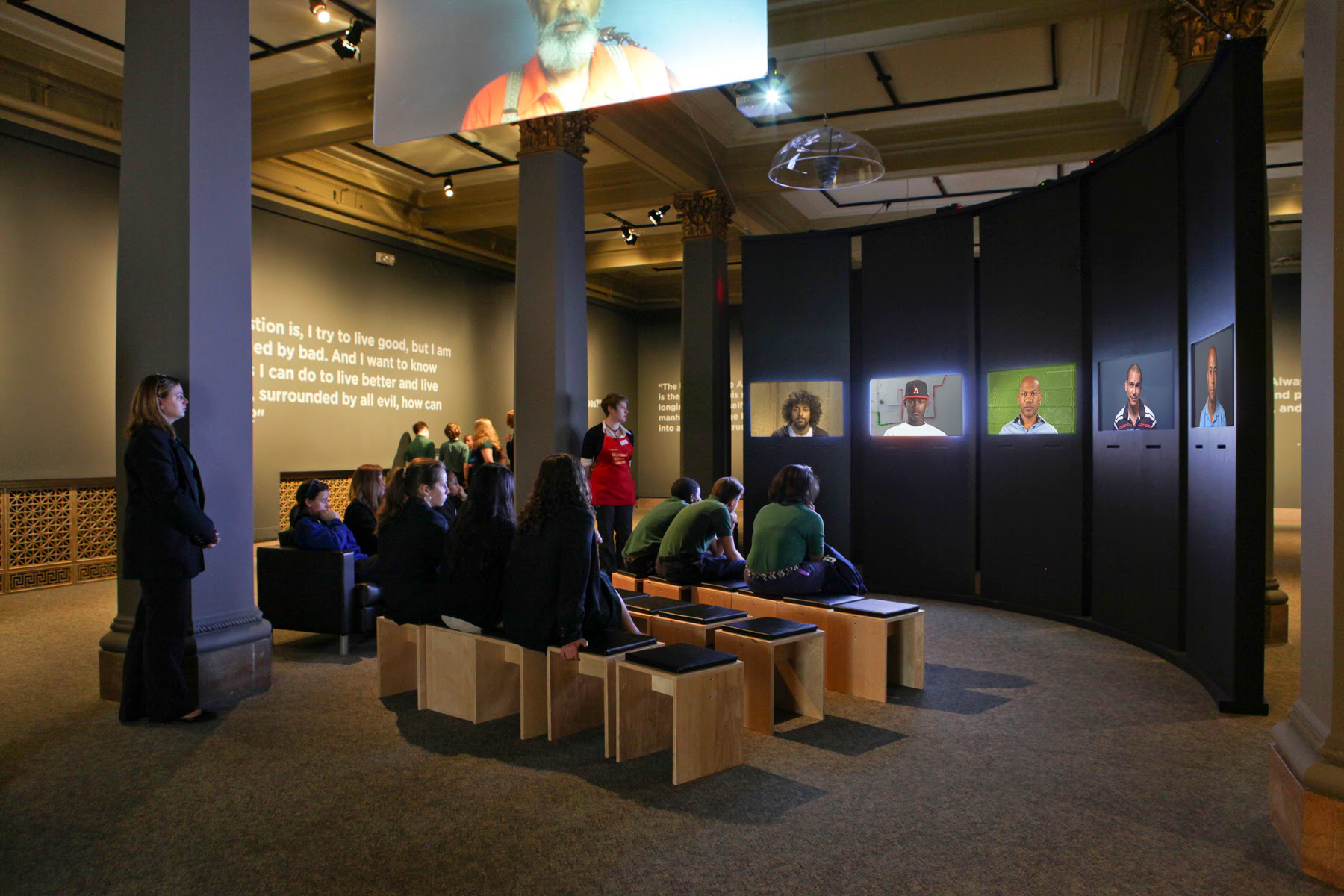 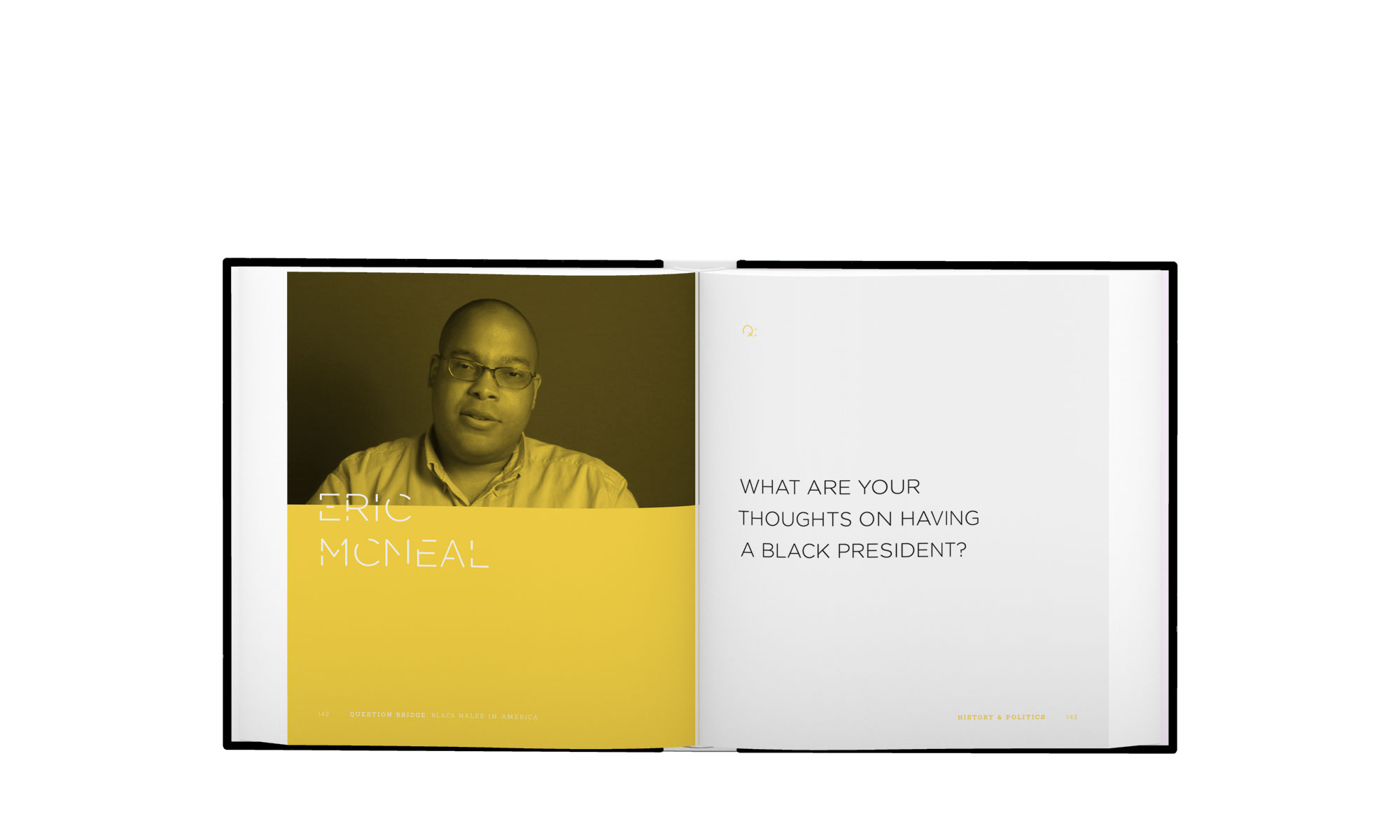 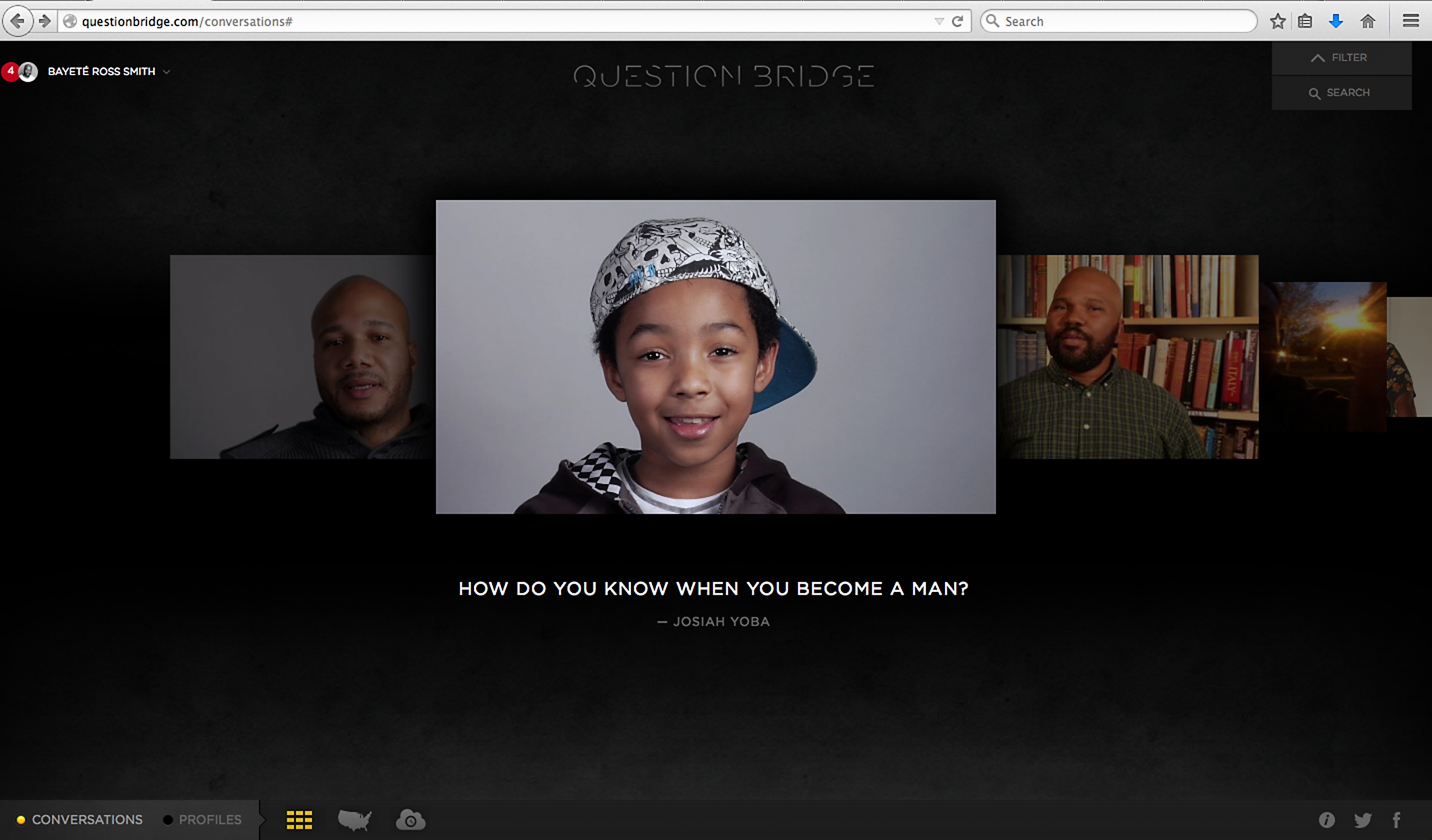 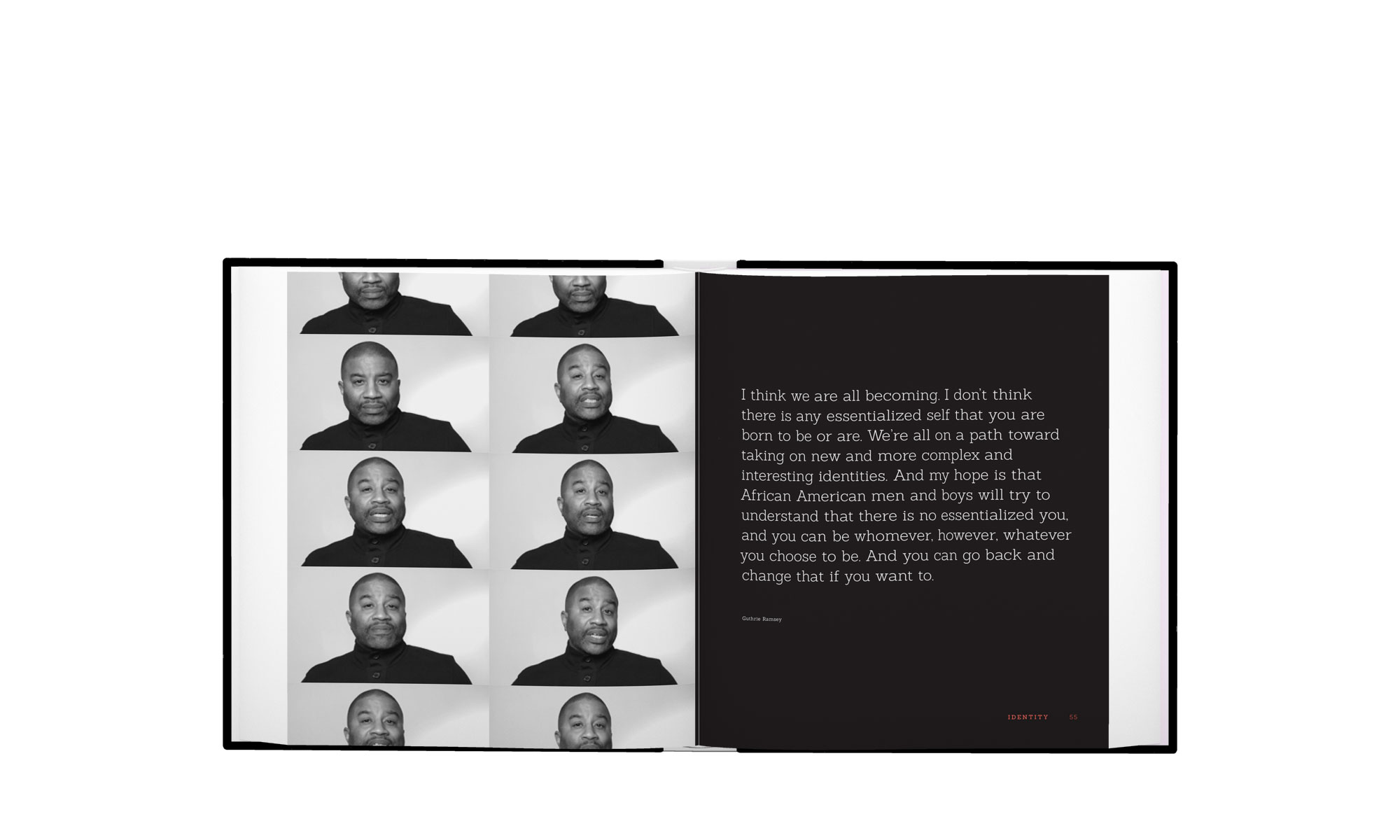 In the afterword for Question Bridge: Black Males in America, Hank Willis Thomas notes that “generations of politicians, activists, and academics…have investigated the ‘plight’ of the African American male, yet far too little is known about the range of internal values and dynamics contained within this group.” What we do know, are the lethal, fixed perceptions that society perpetuates and capitalizes on. As a project, Question Bridge is historically bracketed by events inseparable from the inequity black men experience: from the first instance of video evidence used (unsucessfully) in a case of police brutality (Rodney King, 1991) to Fred Ritchin’s introduction referencing an ICP alum recently put into a chokehold for photographing for Black Lives Matter at a Trump rally.

A successful film, an installation, a website, and a recently launched app, Question Bridge is also the recipient of a 2015 ICP Infinity Award for New Media. Using different forms to maximize a variety of audiences and reach, Question Bridge exposes our deeply flawed models for identity. An intentional platform designed to promote visibility for black men’s emotional lives, this work also presents the very real need for private and public self-definition among black men. A fully developed transmedia platform in progress since the mid 1990s, Question Bridge is now a book, to “give it life beyond the museum,” as Deborah Willis remarked on March 2 at an ICP lecture to celebrate the book launch, where producers Bayeté Ross Smith, Hank Willis Thomas, and Natasha L. Logan were also present on the panel.

The foundation of this work is always discourse between and among black men, mediated by a video camera. Over 160 black-identified men recorded over 1,600 question and answer videos, across 9 U.S. cities, participants answered and posed questions to each other. The producers asked judges, incarcerated men, athletes, engineers, entertainers, factory workers, ministers, queer teens, recently arrived African immigrants and ninth-generation citizens of the U.S.

“I am so sick of regulatory blackness!”—Ronald Porter

On the conceptual direction of Question Bridge, Natasha Logan added “If we got enough people to participate, we could have this one singular place that authentically represented black male identity because it was actually defined by themselves. If we had a critical mass of black men doing that, then the media representations of black men might need to change, because there’d be a counter point. How could you present black males this way on a tv show or in the news, when they’re telling you exactly who they are, right here. That was the motivation behind the transmedia project.”

Ross Smith commented that “when you are talking about people who self-identify as black and male, you’re dealing with a population that’s very prominent in American media, but rarely in control of the images that actually define them.” Creating a platform for black men to ask and answer questions to each other was the format they chose for generating individualized and nuanced dialogue around race and demographics in the U.S. The importance of intergenerational dialogue in a social group that has not had cultural continuum, and only systemic damage, cannot be underestimated. The range of insight shared by the participants is overwhelmingly transformational:

Question: “You know, I wonder, black man, are you really ready for freedom? And if not, what would it take for you to want and need this freedom?”

Ivan Montgomery: “…you got people who’s in prison in dysfunctional relationships. You got people in prison with jobs—they work nine-to-five—that they don’t like. Some people are in prison with alcohol or drug abuse. So I would have to really ask myself, What’s been imprisoning me? What’s imprisoning me is my self-esteem, my lack of self-esteem. My lack of self-esteem has led me to commit crimes, to hurt people, manipulate people, right? So to be free to me would be—I would have to change.”

In response to this and many other insights from participants, Willis Thomas and Ross Smith admit to having found new meaning in co-producing this project. “We were bowled over by the complexity of the men we were engaged with,” says Willis Thomas. “I was always surprised by the different nuances. This guy was much more self-aware in jail than I was ‘free and educated’ in the traditional sense. I realize how many people I don’t get to learn from by assuming that I had more to offer than they did because of their social status or social situation.”

“All the notions that we have about ourselves and our communities can be completely arbitrary, they can all change, simply because we haven’t seen something yet.”

— Bayeté Ross Smith on how the project transformed him personally

A retired policeman of mixed race who now serves his community “as to the way policing should be done” shared his thoughts on the work of generation in the mid 1960s:  “I underestimated the seriousness of our enemies. I underestimated that so much time and effort would be spent dismantling those things that brought about self-esteem, those things that brought about self-love…self-respect in one another.”—David Lemieux

Coincidentally, the first subject for Question Bridge was found in Birmingham, Alabama, a city on the national radar throughout the ‘50s and ‘60s for protests against segregation and systemic racism. The most notable of these protests, The Birmingham Campaign, led directly to the Civil Rights Act of 1964. For this project, no two answers were found identical, showing the closed-off emotional landscapes that black men have been living with in the U.S.

Hearing an adult U.S. citizen admit to not being comfortable eating certain foods in his own country of birth was unsettling. Watermelon, bananas, chicken—the idea of arresting discomfort around specific foods because of racist stereotypes gave some men pause: “I don’t even eat watermelon because of the connotations that it has around black people, but I’ll order some chicken though.” Kalup Linzy offers that for him, the banana is always a sexual symbol, and that’s where he situates the public hesitation around that particular food. Some did not care about the stereotype while others were frozen by implications.

To U.S. citizens, violence is portrayed as a horror of events happening elsewhere—in the Middle East, for example—ignoring the systemic forms of oppression that are in themselves forms of violence. Having to look over one’s shoulder to feel comfortable eating a particular food is an impalpable, subtle form of violence.

In the afterword for the Question Bridge book, Willis Thomas concludes, “the most dangerous thing about blackness is that black people didn’t create it. Europeans with a commercial interest in creating a subhuman type of person that could be traded as a commodity fabricated the concept of a black race. The residue of this mythology continues to corrode our discourse.” What is more imperative to overcome: the fact that race is a construct; or the imperial system of predatory capitalism that requires racism and inequality to sustain itself? What Question Bridge makes clear is that imagery and perception are their own currency in eradicating a harmful mythology. 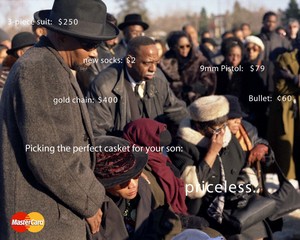 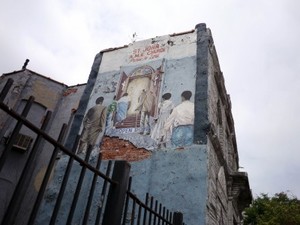 deborah willis The Upper Room
This website stores cookies on your computer. These cookies are used to collect information about how you interact with our website and allow us to remember you. We use this information in order to improve and customize your browsing experience and for analytics and metrics about our visitors both on this website and other media. To find out more about the cookies we use, see our Privacy Policy.
I Accept I Decline