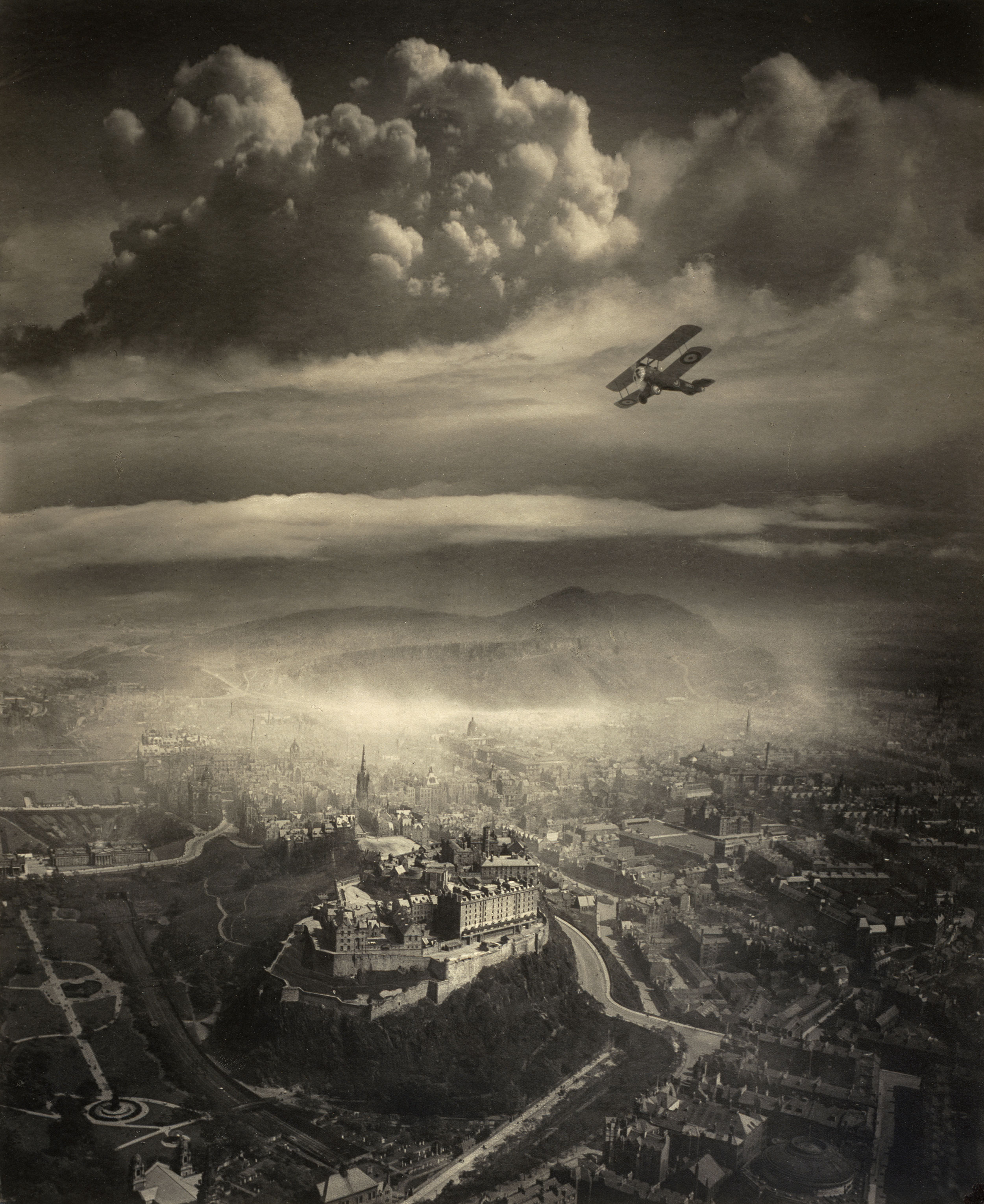 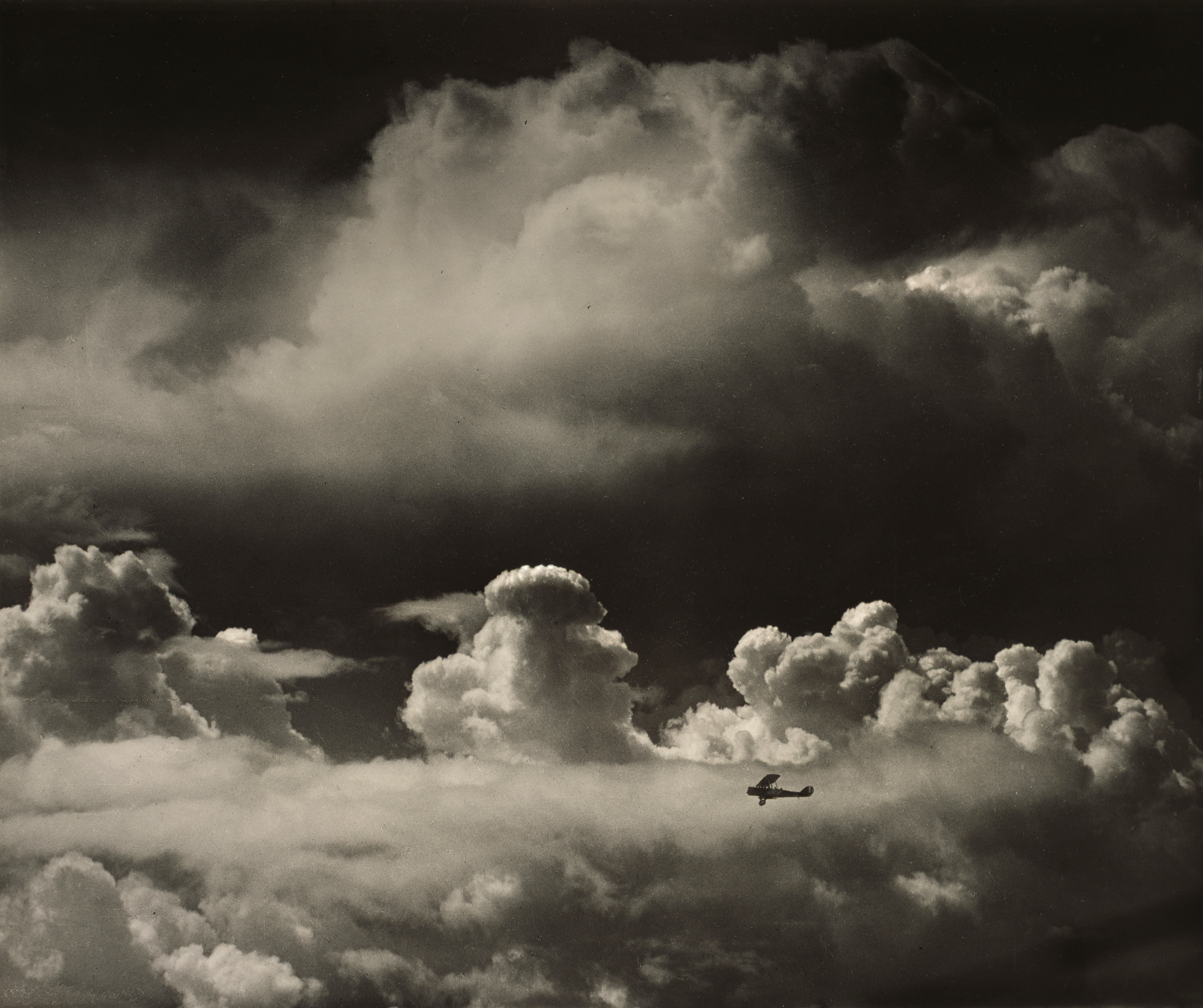 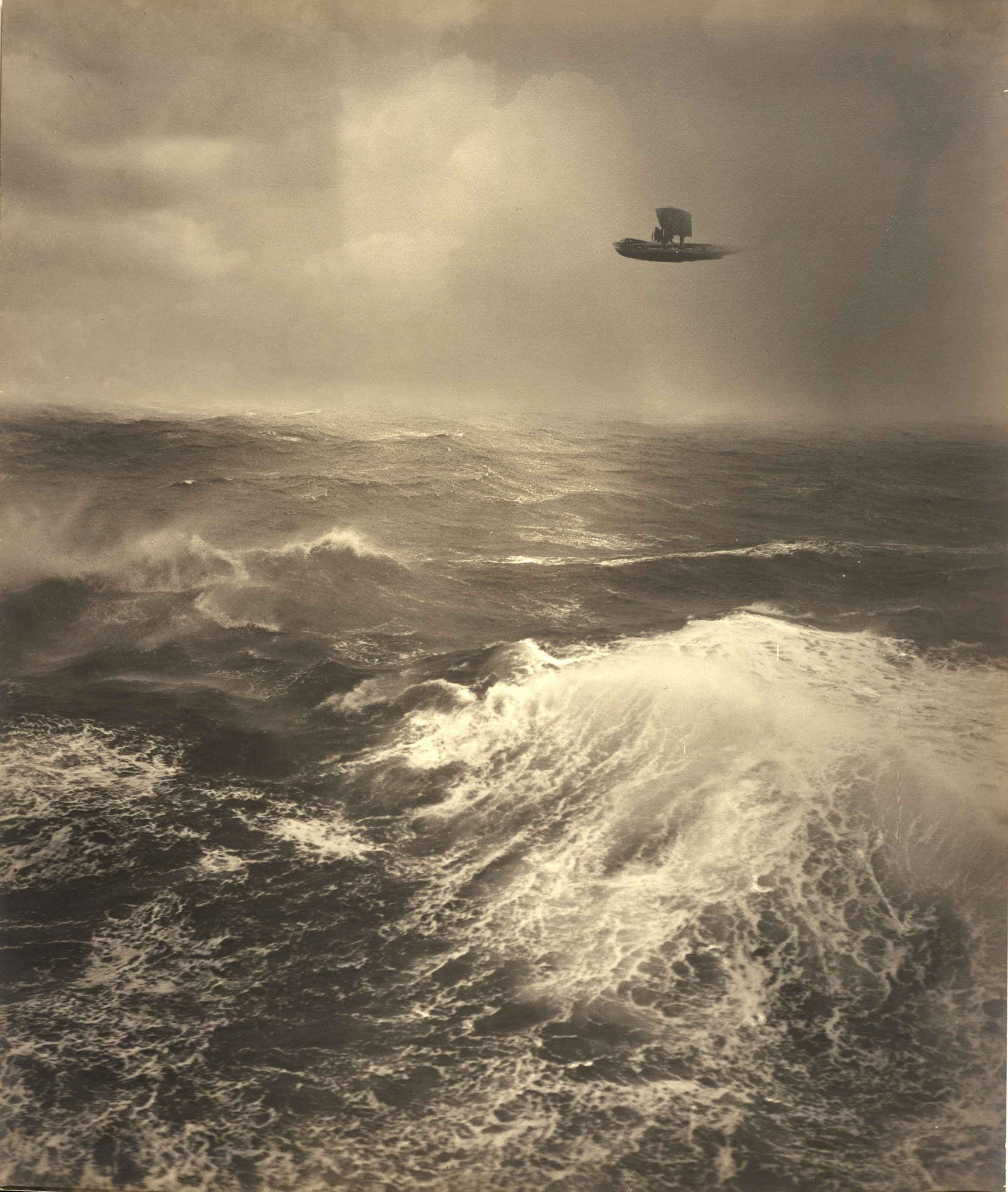 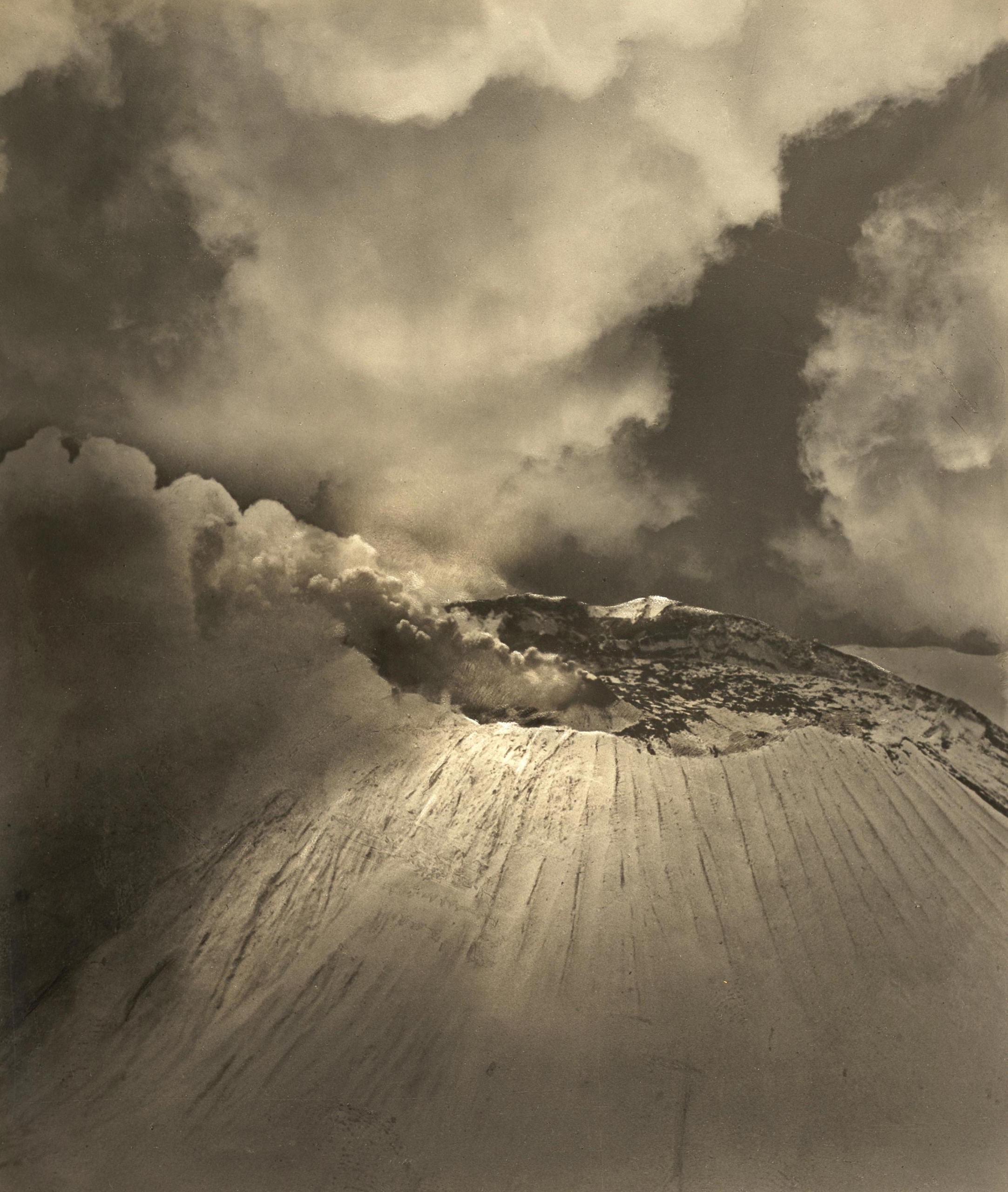 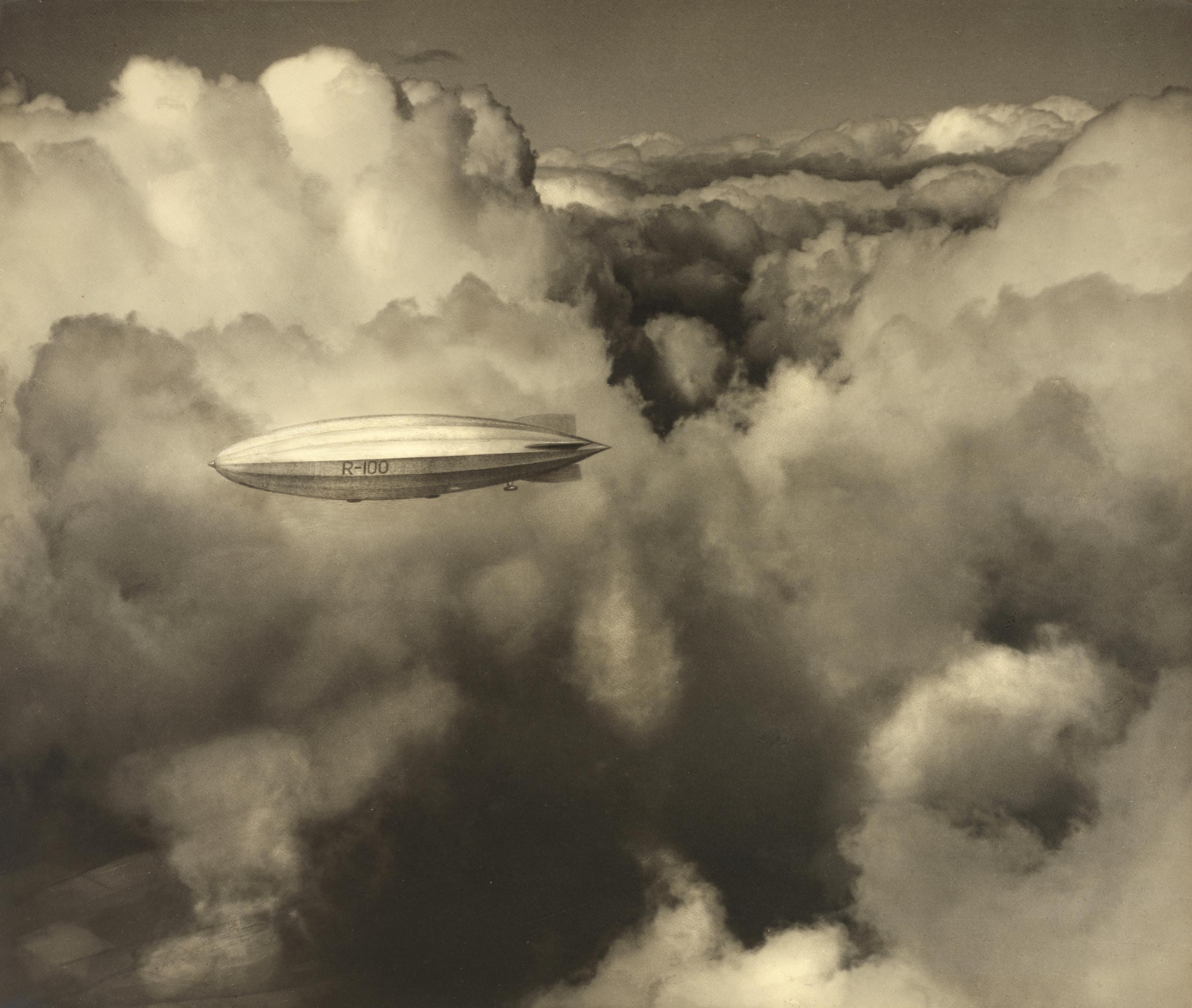 Alfred Buckham took to the skies to rediscover the world of childhood. His was an imagination formed in the nursery, so suffused with enchantment are his images. Perhaps only someone born in the nineteenth century could get away with making photographs this unabashedly beautiful. Taking his romantic vision into the air, he made some of the most stunning aerial photographs ever created. What he saw was nothing like the flat, geometrical grids familiar from most aerial surveys. His cloudscapes echo the canvases of great painters from Constable and Turner to Bierstadt; yet Buckham had a sensibility of his own, a Celtic vision of a twilight world bathed in honeyed light.

A sickly child, Buckham transformed himself into a physically robust adult. Having occupied much of his childhood drawing, he wanted to be a painter. Yet, upon seeing William Mallard Turner’s work, he immediately abandoned that ambition and became a photographer instead, a profession at which he excelled.

During World War I, he was a reconnaissance photographer for the Royal Air Service. A daredevil whose plane crashed nine times (the last one forcing him to breathe out of a tracheotomy tube for the rest of his life,)  he worked in open cockpits, buffeted by wind and oil sprays. Strapping one leg to the seat, he would aim his heavy equipment over the side to get the shot, claiming it was possible to work this way “in perfect security.” Then he would hunker down to change plates!

Carrying the weight and flavor of entire mythological traditions, his imagery has more than a touch of epic poetry. As if from a well-thumbed edition of Arabian Nights, or something out of Camelot and La Mort D’Arthur, his camera transformed the spires and bridges of London and Edinburgh into something out of legend. His views of oceans and volcanoes embraced another kind of myth. This is the abode of the gods, of Thor and Poseidon, who fume with power so enormous and so impersonal we wonder how Buckham lived to tell the tale. With him we traverse skies in which cross-legged clouds sit like geniis, tiny planes buzzing around their feet like dragonflies. Or float through vast cumulous clouds in which a blimp appears like an apparition from outer space. They don’t seem real, these gabled cities and enormous clouds; they seem painted on a stage set, for a ballet, perhaps, or a children’s show. Like those trick pictures of Jesus that change with a turn of the head, they flicker between the real and the unreal, between shadow and light, the way theatrical projections do. And while they are clearly not contemporary photographs, they have the timelessness of fairytales. Though far from surrealist, this other worldly quality embodies what Surrealists like André Breton called, “the Marvelous.”

Here, photography in all its splendid factuality transcends the facts to bring us the power behind them. And this, to my mind, is the heart of Buckham’s achievement. He fulfilled his mission to get the data required, then married it to his poetic and painterly sensibility without missing a beat. He took a medium known for its “objectivity” and made it whoop with joy. Standing in the same spot at the same time holding the same camera as Buckham, Robert Frank could never have taken these photos. His clouds would have spoken to us of despair and loss. The marvelous so celebrated by Buckham would have been lost.

One of the great mysteries of the camera is the way it insists upon fashioning images after their maker. The power of sensibility is so strong it co-opts the machine itself, seeping through the supposedly indifferent world of technology to present a decidedly individual point of view. Of course, this happens more dramatically when great talents wield the tool than when ordinary ones do. But still, it is a puzzlement and a paradox and something to be grateful for.

Buckham had an airborne genius that flourished, like that of those other adventurer-photographers, Harding and Ponting, under extreme conditions. In our present era, when photographs and photographers routinely celebrate the banal in hushed, reverential tones, what a pleasure it is to hear someone who has escaped all earth-bound limitations cry out with astonishment at the marvels they are recording.

Only an artist, technician, and aviator-adventurer such as Buckham could have done it. 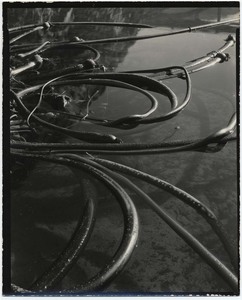 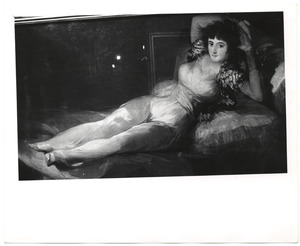 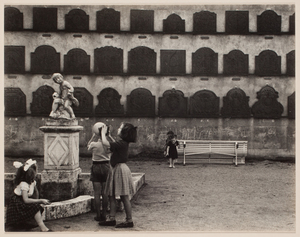 rosalie gwathmey [Children playing playing in a courtyard]
This website stores cookies on your computer. These cookies are used to collect information about how you interact with our website and allow us to remember you. We use this information in order to improve and customize your browsing experience and for analytics and metrics about our visitors both on this website and other media. To find out more about the cookies we use, see our Privacy Policy.
I Accept I Decline