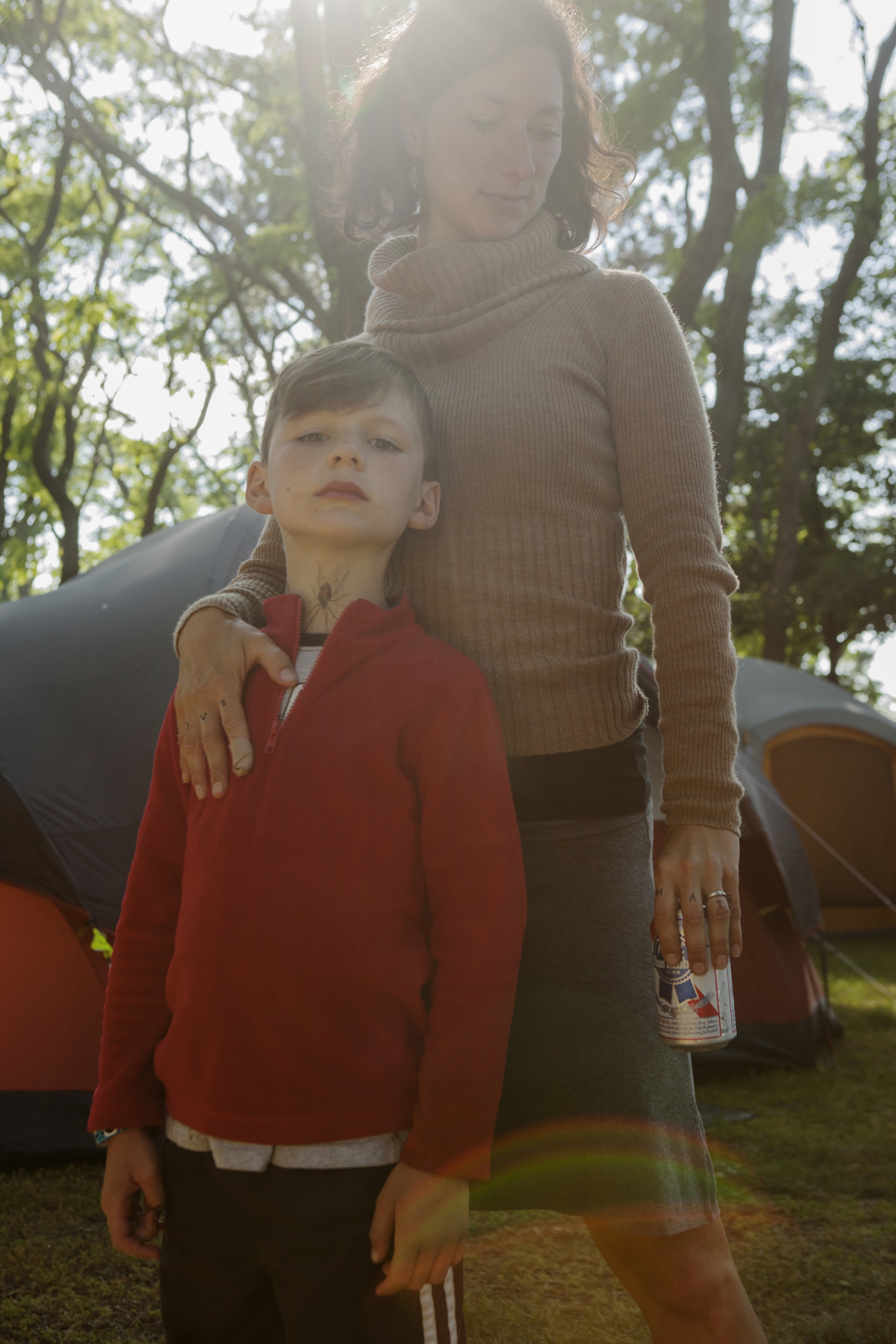 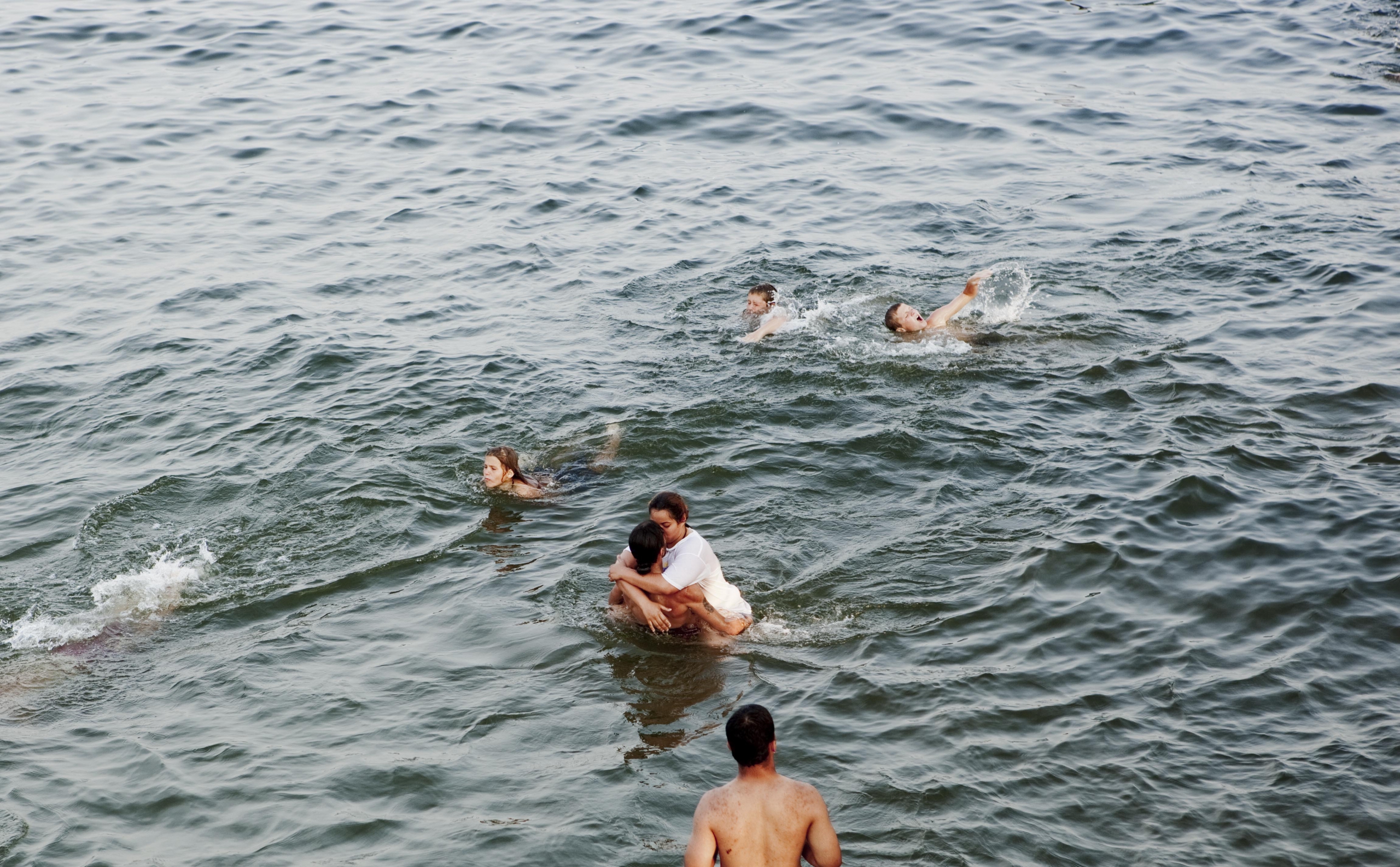 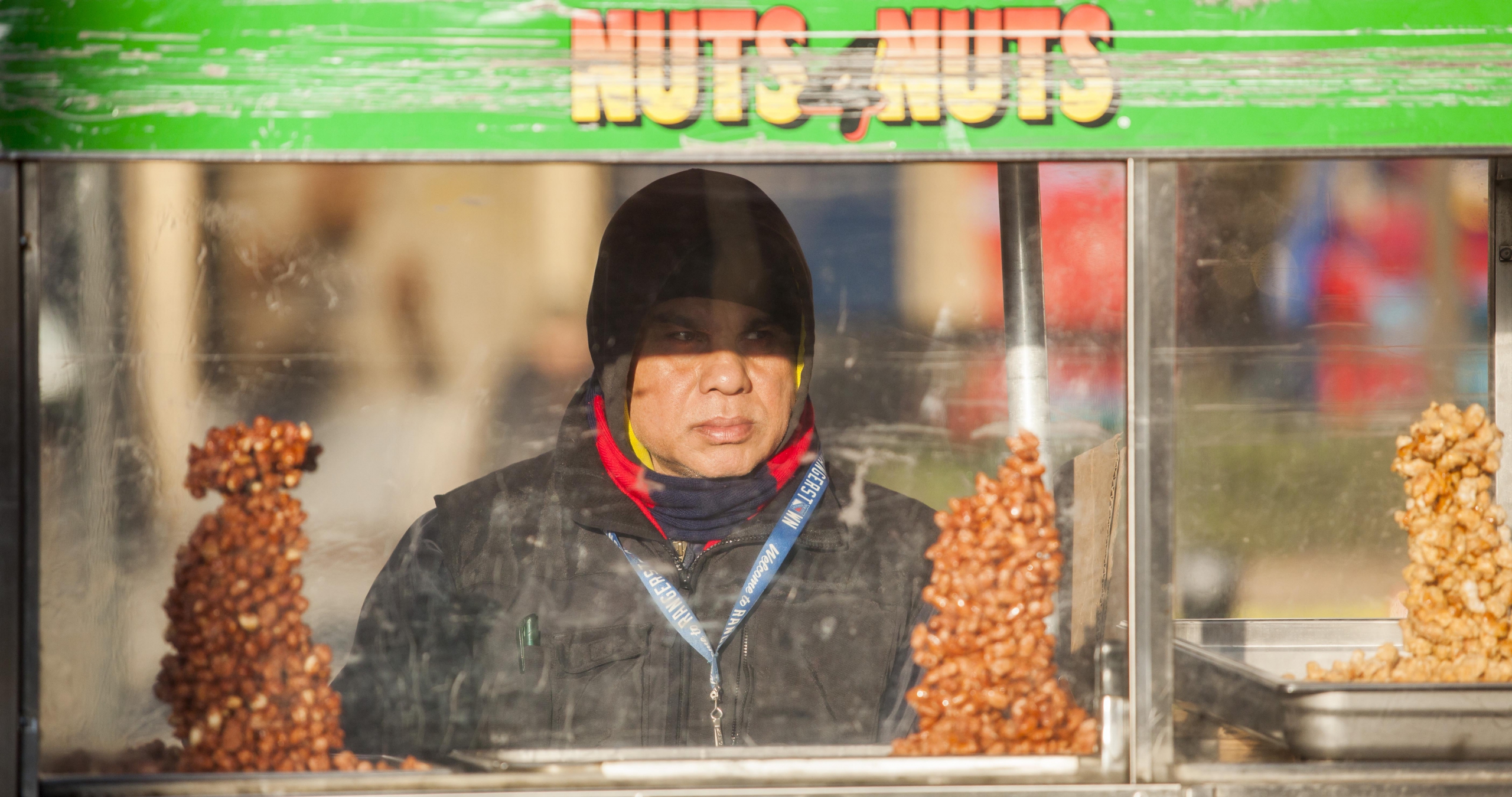 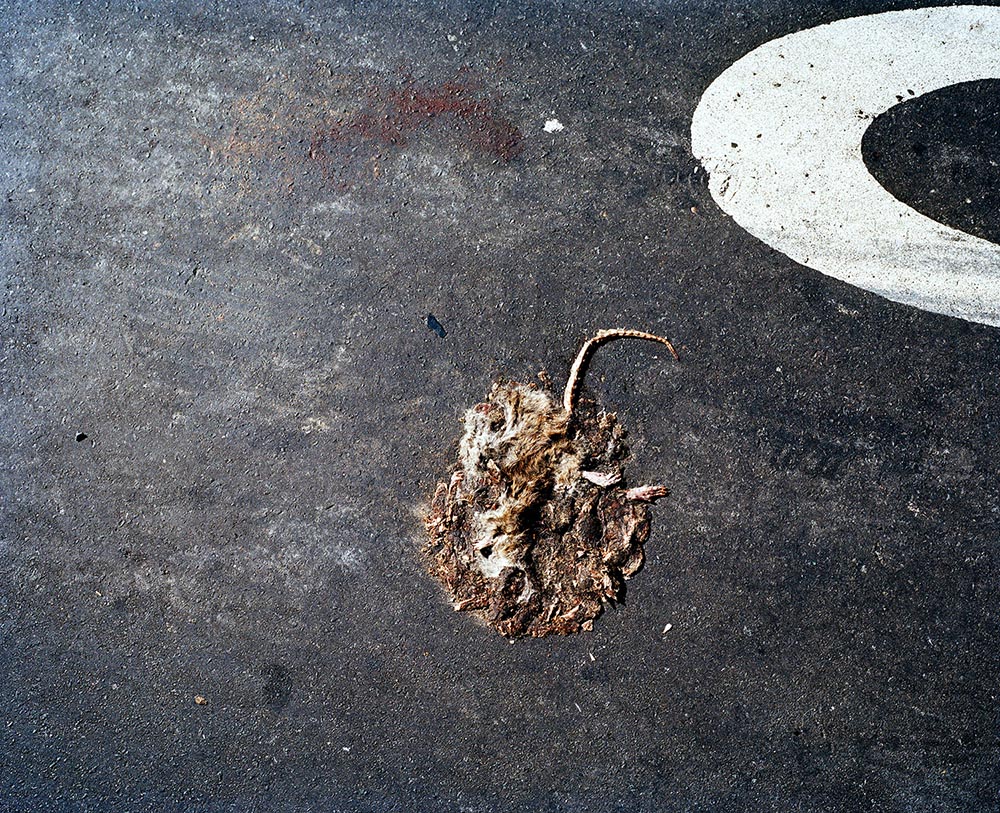 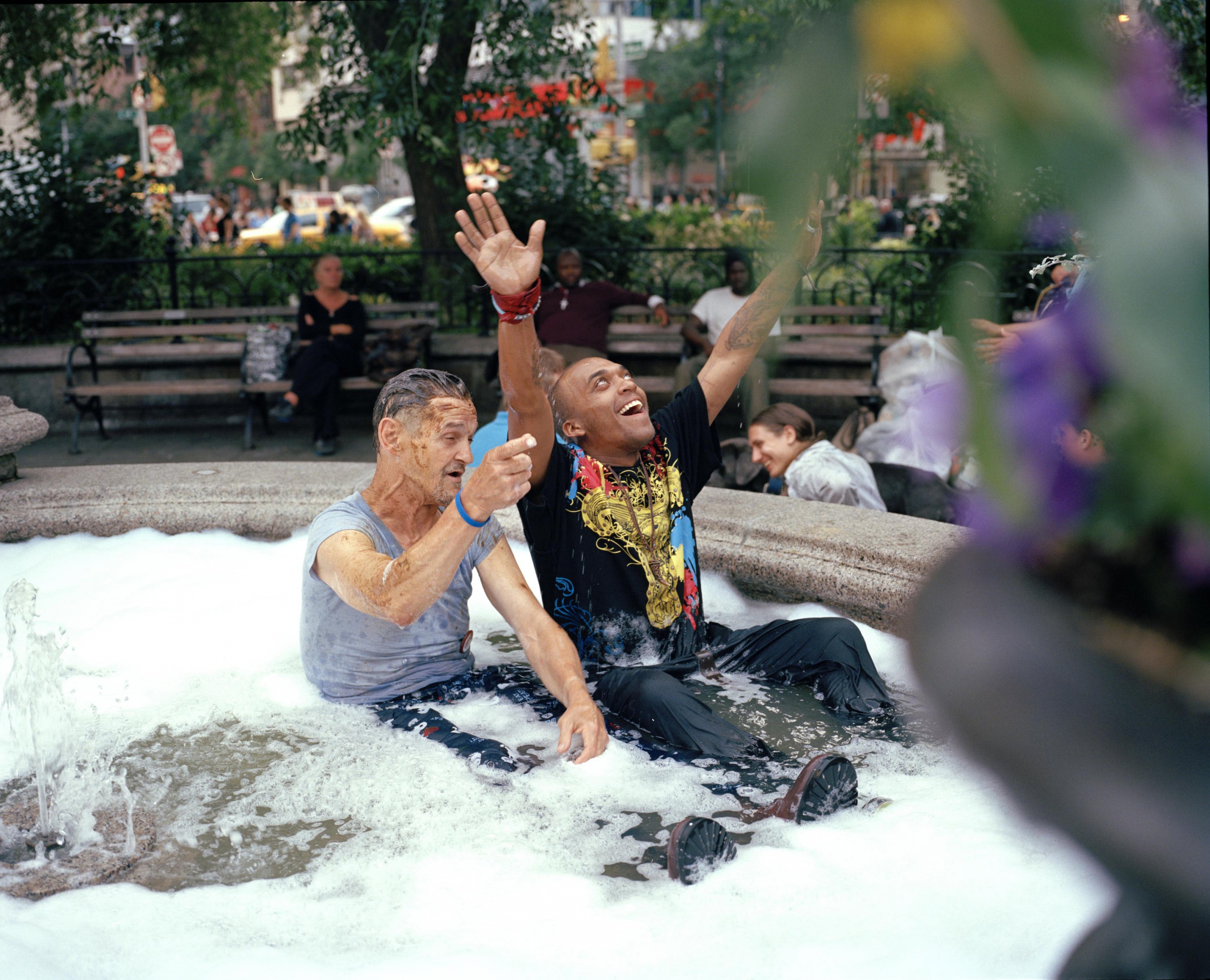 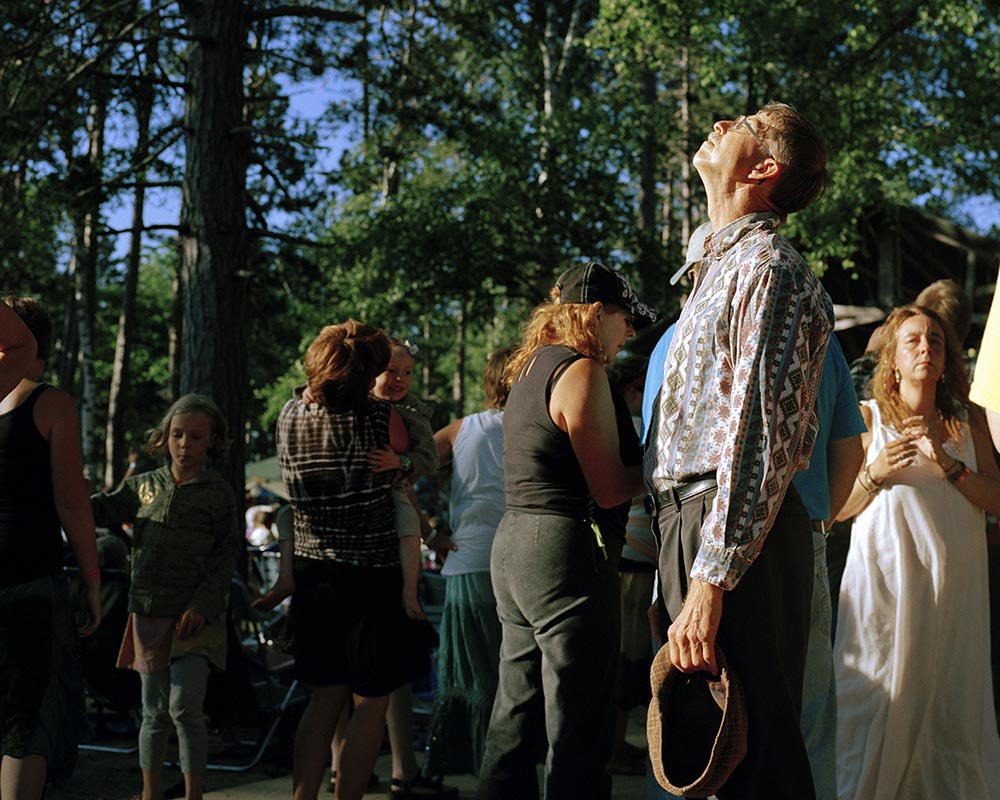 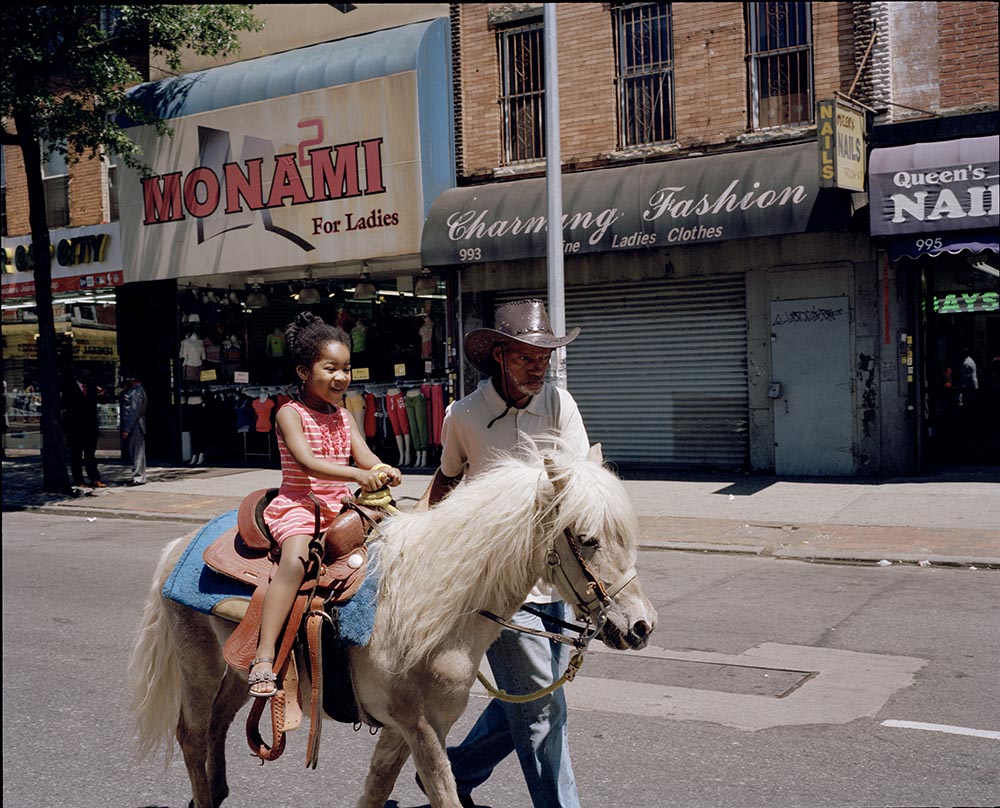 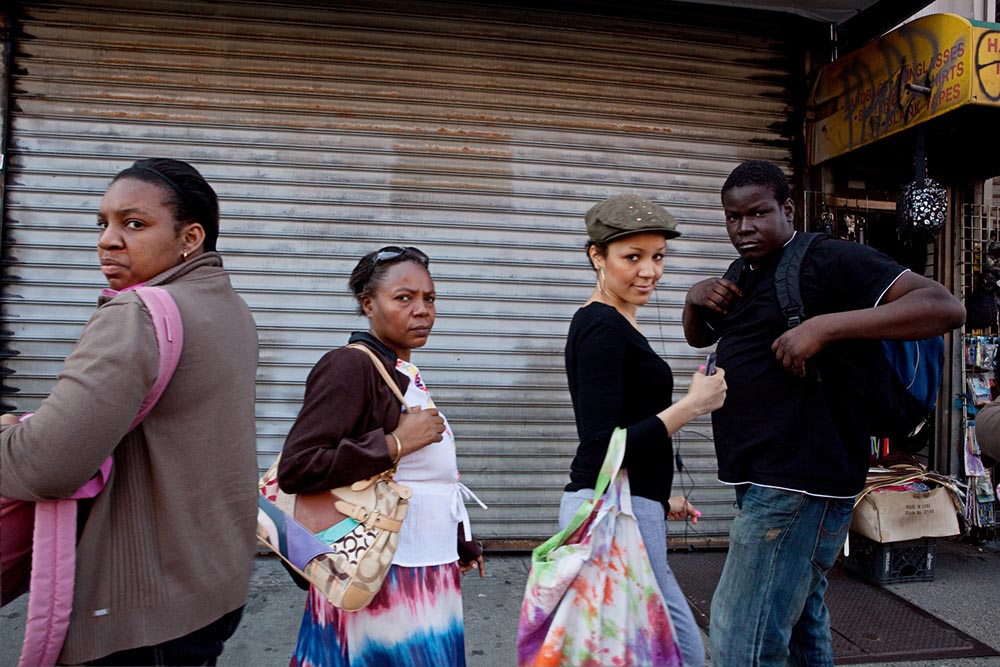 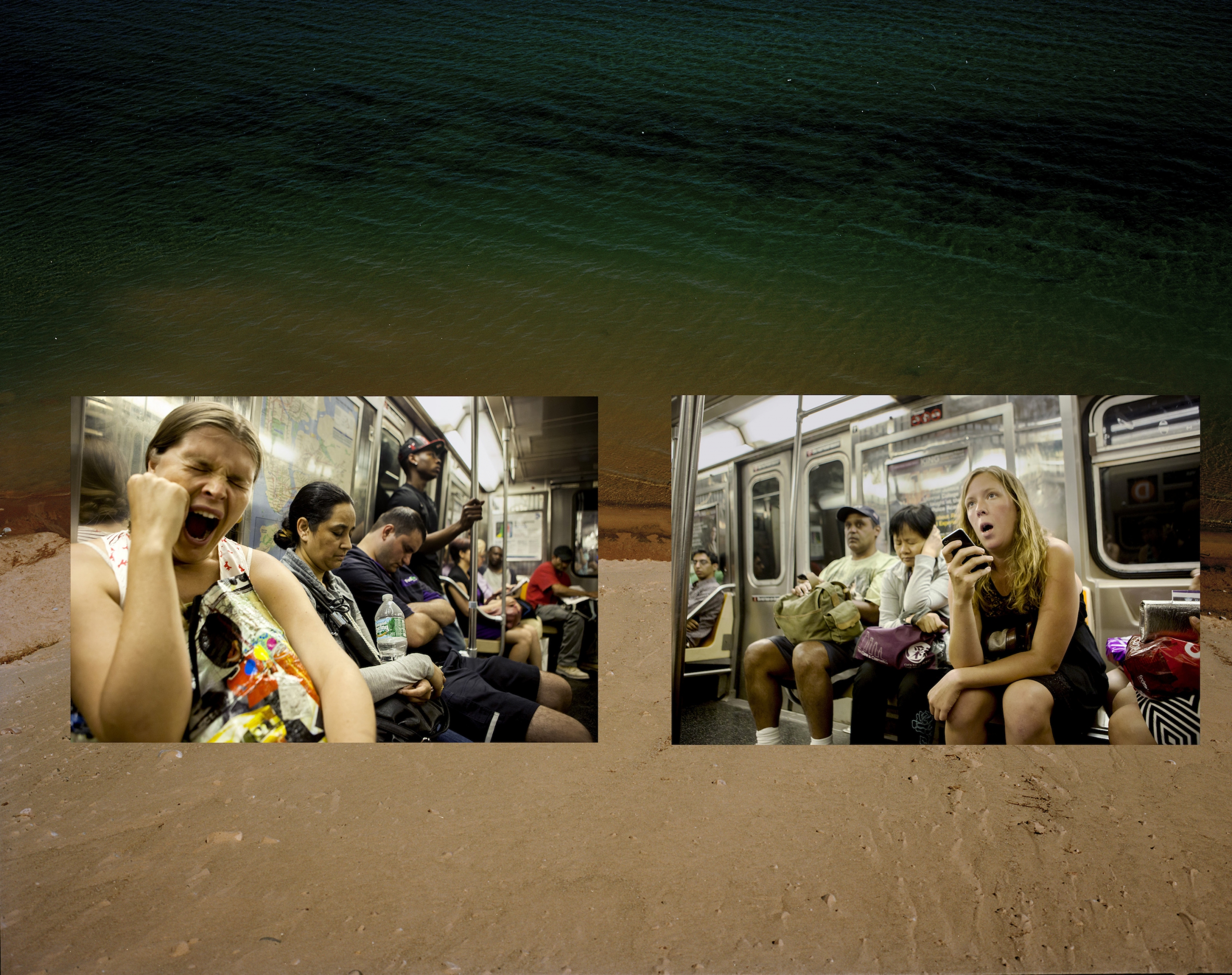 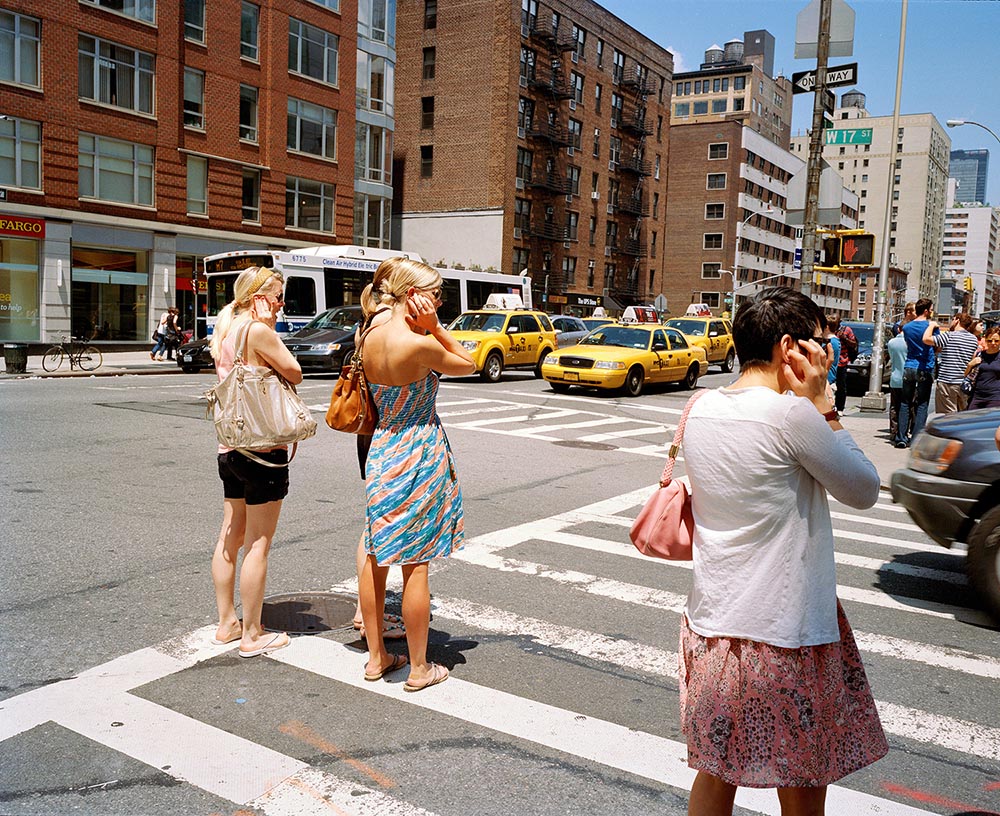 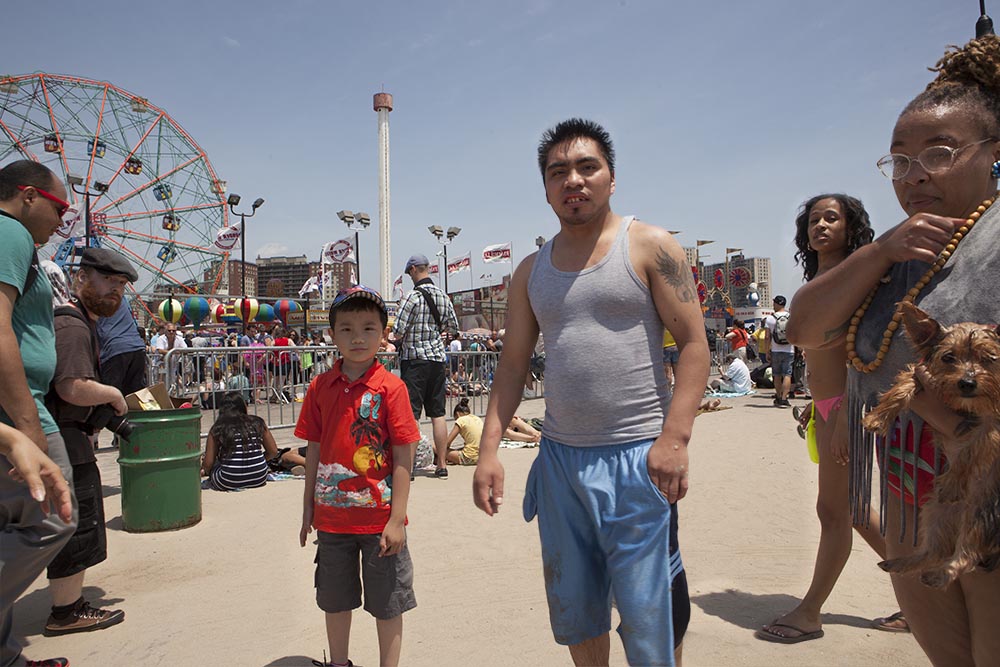 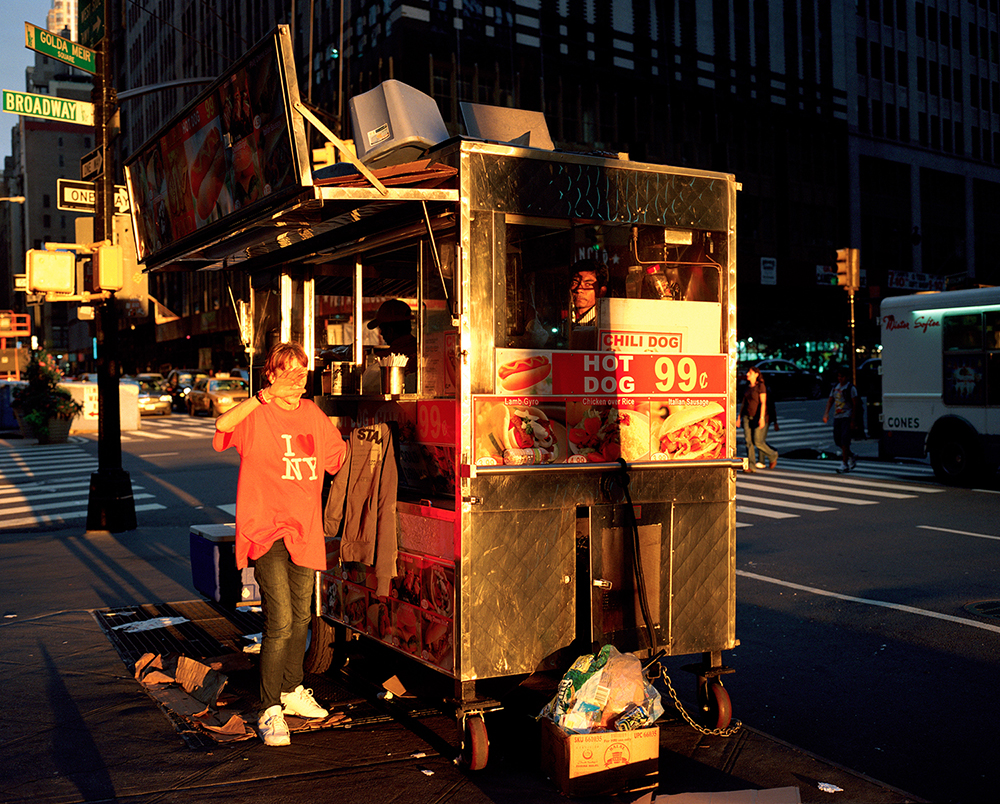 Interview with photographer Nathan Bett, an excerpt from the upcoming issue of Scrapped magazine
Interview

While waiting in line at a market in Vietnam, Frances Denny, one of the editors of an annual limited edition art journal called Scrapped, overheard a man emit a loud, long sigh of frustration. She whispered to her boyfriend, “That was such an American sigh,” thereby coining the concept for the publication’s third issue. Frances along with her fellow editors, Noura Al-Salem, Nicole Horton and Osvaldo Ponto, who met in the General Studies program at the International Center of Photography, chose American Sigh as their theme because it reflects the conflicting feelings that they have about living or having lived in the United States. The following is an excerpt from the aforementioned forthcoming issue.

Liz Sales: You grew up in Marquette, Michigan? What was that like?

Nathan Bett: It’s a very small town, but more important, it’s very geographically isolated.  I grew up in a house full of hippies and musicians that considered my opinion to be equally as valid as anyone else’s opinion. My parents and their friends would call my sister and I into the room and say, “What do you guys think about this?” because they wanted our perspective. I don’t think a lot of kids grow up that way.

I think I grew up a bit that way too.

My mom didn’t so much treat us like children as ... she would be a kid with us. We watched “Looney Tunes” and “Monty Python” and laughed with her for hours. I get my sense of humor and spontaneity from my mom. And I get my considered side from my dad. My parents really kind of dropped out in the 70s.  They moved up rural Northern Michigan and built a rustic house on a seasonal road with no plumbing or electricity.  My dad delivered me in that house with no doctor present and we lived there until I was about 5.

What sort of influence do you think your upbringing has on your work?

Well, my parents emboldened me in a lot of ways. I think the worst advice that parents of our generation gave their children is “Don’t talk to strangers.” You should talk to strangers. Strangers are fucking great. I have a strong appetite for observing strangers. I talk to strangers on the streets, I pet their dogs, or I just stare at them. I’m a voracious consumer of life. But staring at people isn’t really socially acceptable. Photography is a way to normalize this behavior, socially.  I try to use my camera as a tool for forcing interaction with strangers.

Do you think your interest in strangers also has something to do with the fact that you grew up in a place where there weren’t many strangers?

I think so. One of the things that I love so much about the city is the anonymity of it. I’ve always wanted a sense of anonymity.

So what made you go to college close to home? You went to Northern Michigan University?

I think it’s meritable. Even though I had only a 1.8 GPA in high school, I still did very well in college. I knew a lot of people that had similar experience.  So, I think the program works.

Do you think that’s because college is more engaging than high school?

Well, I chose to be there, and it didn’t feel like being babysat. My upbringing made high school feel patronizing and boring. The American school system is terrible.

Did you study photography in college?

I started off by just taking a lot of classes that I thought sounded interesting, like Introduction to Audio Recording and the History of Jazz. I was in a black and white photography class and enjoyed it. My professor and I connected, and he seemed to think I was a good photographer. It just kind of made sense to me to stick with it. It’s not something that I ever sought out; it’s just something that I fell into. I don’t think I owned a camera until I was probably 21 years old, a Nikon FM 10 fully manual.

You moved to Detroit after school?

I wanted to move to New York, but I didn’t have any money. Amy, my girlfriend, wife by the time this article comes out, was from the Detroit area, so we knew people there, some who worked in the photo industry. I moved there to save money.

Is there money to be made in Detroit?

Detroit actually used to be one of the biggest photo markets in the country. During the 1970s and 1980s, Detroit used more 8x10 film than anywhere else in the world.

You were shooting automobile advertisements?

That was the bulk of the work. I worked for a studio, pretty much the last of the big Detroit studios. Our biggest clients were Ford, Chrysler, General Motors, Harley Davidson.

The work you made in Detroit is so different than the work you made while earning your MFA at Parsons. It’s highly produced and staged on elaborate sets. What about school and/or the city inspired you to embrace street photography?

My work couldn’t stay the same. I was working in a million-dollar playground in Detroit. The studio had a couple of hundred thousand square feet of studio space and every piece of equipment. When I wasn’t working, I could come in and build a set and use their lights and $60,000 digital camera backs. But when I got to school, I didn’t have that million-dollar playground anymore. So, I thought, what are the resources that I have at hand? I have the city of New York. I guess I’ll use that because that’s what I have. So, I had to adopt a new working strategy. I think, in the end, this propelled my work forward.

It’s less contrived. Now, even when I’m manipulating my images, I’m responding to the real world. Aesthetically, my work shares a lot with it street photography, but it’s not traditional street photography. For example, when I first started making my composite images I had a different idea in mind, but then I started noticing all these people in my images giving me the stink eye. At the time I was really timid about shooting people on the street even though that’s what I was interested in. So, on a whim, I cut all these people out and put them together in one image so that the viewer is surrounded by them. And it just hit me like, “That’s what it feels like! This is the anxiety that I’m feeling. It feels like this!”

I discovered something about the way that I felt that I didn’t understand until I had visualized it. That, to me, is what art making is about, self-discovery and emotional expression. And that’s why it’s hard for me to make that work today because …

Because you’re not having that anxious experience anymore?

No, I don’t give a shit anymore. I’ll walk right up to somebody on the street and stick my camera in their face. I don’t care if they give me a dirty look.

Why don’t you care?

I’ve been shooting on the street for a while now, and I’ve become desensitized.

Oh, so you never had ethical concerns; you were just uncomfortable with all the dirty looks you were getting?

Yes, I don’t think I ever felt like I was doing something wrong. I had anxiety about it because people were openly hostile to me.

Hostility does not bother you anymore?

No, in fact, if I don’t encounter a certain amount of it, I feel I’m not trying hard enough.

Pushing the boundary of acceptable social interaction, I guess.  Getting the shot I want regardless of how the subject may feel about it. Capturing the world as I see it, sometimes at the expense of someone else's comfort.  It’s hard to articulate in words.

There is not a lot of language around street photography in general so, maybe...

Paul Graham expressed this in an essay called “Unreasonable Apple.” His point was basically that the Art establishment doesn’t know how to talk about street photography. It’s really easy to look at Cindy Sherman, Jeff Wall or Thomas Demand, these people that we think of as artists using photography, and say, “This is what the artist did”: “She put on a costume,” “He recreated a moment,” or “He built a model.”

It’s a lot harder for the art world to talk about Stephen Shore or Gary Winogrand. Did they just stand on a corner and push a button? I mean, you and I know that that’s not true, but the art world at large doesn’t know how to talk about it. I think it’s a genuine form of art.

Can you explain to me what you mean by genuine?

I don’t know if I can. When I think about the work I am showing in this magazine, which are from both New York and Marquette, ... this is going to sound really pretentious ... I want to get at what life is about. At least, as I see it.

What is life about?

People treat that phrase “the meaning of life” really strangely I think. I think they give it to much reverence. I find meaning in life every day. My work is absurd and a little bit sad, which, for me, is what the world is like. It’s random and a little bit disappointing but at the same time beautiful. That’s how I want my work to be.

What is a photograph of a woman standing in front of a hot dog cart and blocking her eyes from the blinding sunset? It doesn’t mean anything exactly. It’s just a beautiful moment that is gone as soon as it happens. And that’s what life is. That’s all it is.

Nathan Bett is an artist and photographer originally hailing from the remote town of Marquette, Michigan.  He holds a BFA in Art from Northern Michigan University, and an MFA in Photography and Related Media from Parsons The New School For Design.  He has exhibited work at galleries and festivals in the U.S. and internationally and received the National Photography Award from The Camera Club of New York in 2011.  He is a faculty member at The City University of New York, College of Staten Island. Nathan lives and works in Brooklyn, New York.

Liz Sales
Related Items
Interview Dialogue with Heather M. O'Brien Perspective Between Sky and Earth: Christian Erroi Interview Frances Denny on Life After Graduation School Creative Practices Interview On Songbook: In Conversation with Alec Soth
This website stores cookies on your computer. These cookies are used to collect information about how you interact with our website and allow us to remember you. We use this information in order to improve and customize your browsing experience and for analytics and metrics about our visitors both on this website and other media. To find out more about the cookies we use, see our Privacy Policy.
I Accept I Decline