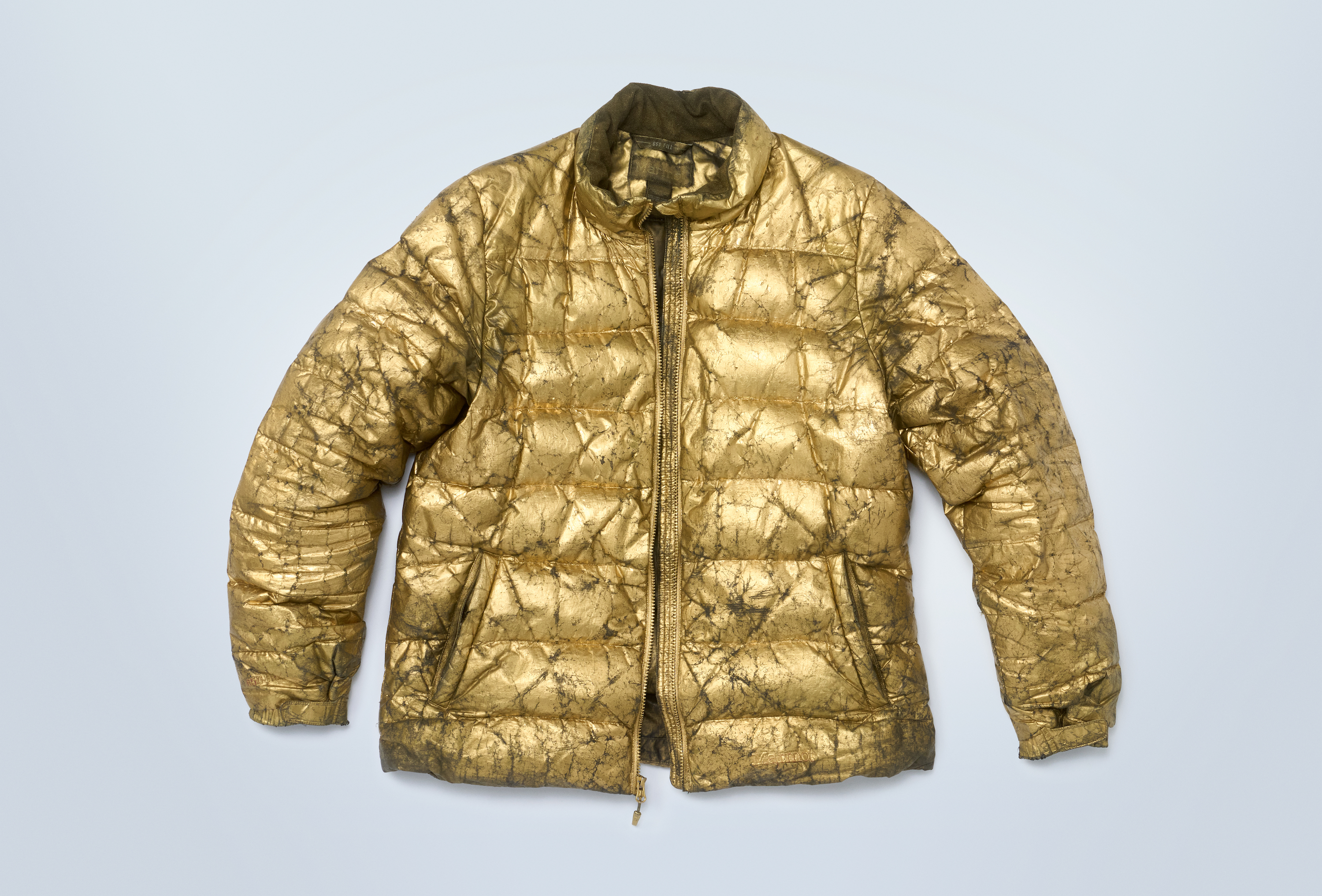 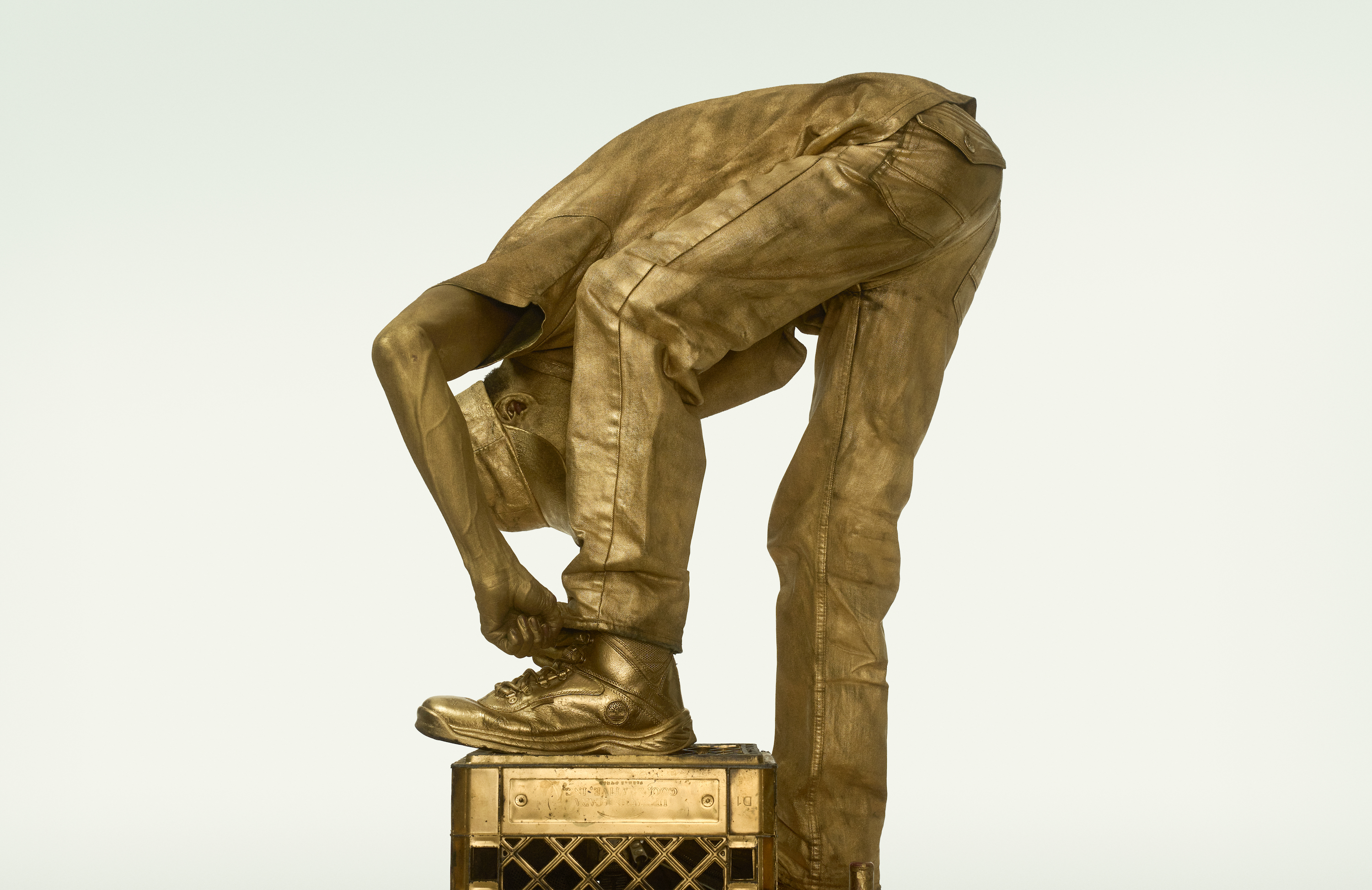 Still Life was made in collaboration with the iconic street performer known as “Da Gold Man,” who has appeared as a living statue on the sidewalks of Times Square for over seventeen years. Covered in gold and standing motionless on a common milk crate, Da Gold Man fascinates and enthralls passersby with his uncanny, statue-like presence. When amazed audiences drop money in his tip box, he moves as a sign of appreciation.

For this project, Pfeiffer removes Da Gold Man from his usual spot on the corner of Broadway and 43rd Street and installs him within the infinite white space of a commercial advertising studio—a seamless backdrop typically used to photograph high-end jewelry, designer fashions, and other luxury products. The pictures resulting from this unlikely mixture blur the line between studio portraiture and product photography.

Still Life explores the power of art to alter our awareness of the everyday world. Like Da Gold Man, Pfeiffer’s photographs blur the line between personal identity and manufactured commodity. Their scale, detail, and alluring presentation slow down the act of seeing, revealing a being that is simultaneously human and object. Forever suspended in time, Pfeiffer invites us to view the living statue as a cipher of the contemporary moment, and to consider both what we can—and cannot—see.

Born in Honolulu in 1966, Paul Pfeiffer grew up between Hawaii and the Philippines before moving to New York in 1990 to attend Hunter College and the Whitney Independent Study Program. Pfeiffer is known for his highly sophisticated use of digital technologies and new media, and has created celebrated works of video, photography, installation, and sculpture since the late 1990s. Using digital erasure, magnification, and repetition, Pfeiffer samples and retouches images or video footage from sporting events, concerts, game shows, and Hollywood films to enhance their psychological effects. By drawing attention to certain aspects of visual culture and concealing others, he underlines the spectacular nature of contemporary media and its consumption.

Pfeiffer has had one-person exhibitions at the Whitney Museum of American Art (2001); the Museum of Contemporary Art Chicago (2003 and 2017-18); the National Gallery of Victoria, Melbourne (2005); MUSAC León, Spain (2008); the Hamburger Bahnhof, Berlin (2009) and Sammlung Goetz, Munich, Germany (2011). Pfeiffer has presented work in major international exhibitions in recent years, including the Performa Biennial (2019), the Honolulu Biennial (2019), the Seoul Mediacity Biennial (2022) and the Toronto Biennial (2022). His work is in the permanent collections of the Museum of Modern Art and the Whitney Museum of American Art, New York; Inhotim Museu de Arte Contemporanea, Inhotim, Brazil; the Pinault Collection, Venice; and Kunst Werke, Berlin, among others.

ICP.org Events ICP.org Membership
This website stores cookies on your computer. These cookies are used to collect information about how you interact with our website and allow us to remember you. We use this information in order to improve and customize your browsing experience and for analytics and metrics about our visitors both on this website and other media. To find out more about the cookies we use, see our Privacy Policy.
I Accept I Decline