Magnum photographers Michael Christopher Brown, a 2017 ICP Infinity Award recipient for Artist's Book, and Susan Meiselas discuss their work documenting revolt, human rights, conflict, and revolution. Their discussion will feature Brown’s recently released book about the Libyan Revolution, Libyan Sugar, which Brown shot entirely with his phone camera in 2011. Texts by Meiselas and Brown will be available for purchase and signing at the end of the discussion.

This event is part of our special programming series celebrating Magnum's seventieth anniversary.

Michael Christopher Brown is a photographer and filmmaker. His recent work-in-progress explores the electronica music and youth scene in Havana, Cuba, and the conflict in the Democratic Republic of the Congo. In China he put together a series of works from road and train trips, while Libyan Sugar explored ethical distance and the iconography of warfare while using a phone camera. He is a contributing photographer at National Geographic Magazine and the New York Times Magazine. He was subject of the 2012 HBO documentary Witness: Libya. His photographs have been exhibited at the Massachusetts Institute of Technology, the Museum of Fine Arts (Houston), and the Brooklyn Museum. Libyan Sugar book was released in 2016 by Twin Palms Publishers, a film and a mixed media installation will complete the project. He is represented by Magnum Photos.

Susan Meiselas is a documentary photographer who lives and works in New York. She is the author of Carnival Strippers (1976), Nicaragua (1981), Kurdistan: In the Shadow of History (1997), Pandora’s Box (2001), and Encounters with the Dani (2003). She has co-edited two published collections: El Salvador, Work of 30 Photographers (1983) and Chile from Within (1990), rereleased as an e-book in 2013, and also co-directed two films: Living at Risk (1985) and Pictures from a Revolution (1991) with Richard P. Rogers and Alfred Guzzetti. Meiselas is well known for her documentation of human rights issues in Latin America. Her photographs are included in American and international collections. In 1992 she was made a MacArthur Fellow and most recently was awarded a Guggenheim Fellowship (2015). 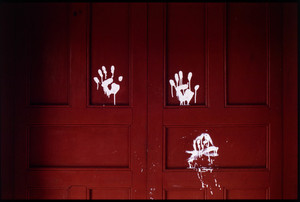 susan meiselas "Mano Blanca," signature of the death squad...
This website stores cookies on your computer. These cookies are used to collect information about how you interact with our website and allow us to remember you. We use this information in order to improve and customize your browsing experience and for analytics and metrics about our visitors both on this website and other media. To find out more about the cookies we use, see our Privacy Policy.
I Accept I Decline