Danny Lyon’s haunting photographs documenting the lone buildings, empty streets, and eventual destruction of nearly sixty acres of land below Canal Street in Manhattan in the 1960’s continues to hold relevance and interest today. Perhaps because urban development and gentrification remain prevalent forces in New York City, and even more so in the midst of a pandemic and time of social unrest that has largely been depicted through abandoned spaces, closed businesses, and battered storefronts.

Explore this iconic photo series further through a special conversation centered on the re-publication by Aperture of Danny Lyon’s 1969 photobook, The Destruction of Lower Manhattan. Lyon will be joined by writer, editor, and curator Randy Kennedy for a discussion about the making of the book, the photographs, and its lasting relevance today.

Purchase The Destruction of Lower Manhattan (Aperture) through ICP's shop.

We need your support. Concerned photography is needed now more than ever. Admission to this virtual program is $5—help keep public programs accessible to all by donating today.

Members receive $5 off public programs. Use your member discount code at checkout to receive your discount. If you have issues processing your payment, please email [email protected] for further assistance.

About The Destruction of Lower Manhattan

First published in 1969, The Destruction of Lower Manhattan is a singular, lasting document of nearly sixty acres of downtown New York architecture before it’s destruction in a wave of urban development.

After creating the series The Bikeriders and moving back to New York in 1966, Lyon settled into a downtown loft, becoming one of the few artists to document the dramatic changes taking place. Lyon writes, “Whole blocks would disappear. An entire neighborhood. Its few last loft occupying tenants were being evicted, and no place like it would ever be built again.” Through his striking photographs and accompanying texts, Lyon paints a portrait of the people who lived there, of rooms with abandoned furniture, children’s paintings, empty stairwells. Intermingled within the architecture are portraits of individuals and the demolition workers who, despite their assigned task, emerge as the surviving heroes. Danny Lyon’s documentation of doomed facades, empty interiors, work crews, and remaining dwellers still appeals to our emotions more than fifty years later, and Aperture’s reissue retains the power of the original.

This facsimile of The Destruction of Lower Manhattan has been produced and published by Aperture in partnership with Fundación ICO.

This program will take place on Zoom. Those who register to attend will receive a confirmation email with a link located at the bottom of the email under ‘Important Information’ to join the lecture through a computer or mobile device.

If you do not receive the link by 2 PM on the day of the lecture or if you have questions about the virtual lecture, please contact: [email protected].

Danny Lyon (born in New York, 1942), regarded as one of the most influential documentary photographers, is also a filmmaker and writer. His many books include The Movement (1964), The Bikeriders (1968, reissued by Aperture, 2014), Conversations with the Dead (1971), Knave of Hearts (1999), Like a Thief ’s Dream (2007), and Deep Sea Diver (2011). Lyon’s work is widely exhibited and collected, and he has been awarded Guggenheim Fellowships twice, National Endowment for the Arts grants numerous times, and a 2011 Missouri Honor Medal for Distinguished Service in Journalism.

Randy Kennedy is a writer, editor, and curator. His first novel, Presidio, about a wandering car thief in West Texas, was published in 2018 by Simon & Schuster. For 25 years, he was a reporter for the New York Times, more than half of that time writing about the art world. He is now editor in chief of the art magazine Ursula, published by the gallery Hauser & Wirth, and he serves as the gallery's director of special projects. He is at work on a new novel set in the 1960s in a mental hospital in the Sacramento Valley. He is editor of the forthcoming American Blood: Danny Lyon, Selected Writings 1961–2020, published by Karma Books. 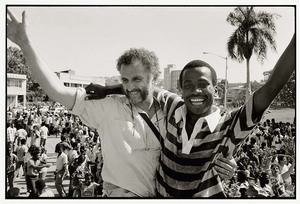 ICP.org Events ICP.org Corporate Partnerships
This website stores cookies on your computer. These cookies are used to collect information about how you interact with our website and allow us to remember you. We use this information in order to improve and customize your browsing experience and for analytics and metrics about our visitors both on this website and other media. To find out more about the cookies we use, see our Privacy Policy.
I Accept I Decline