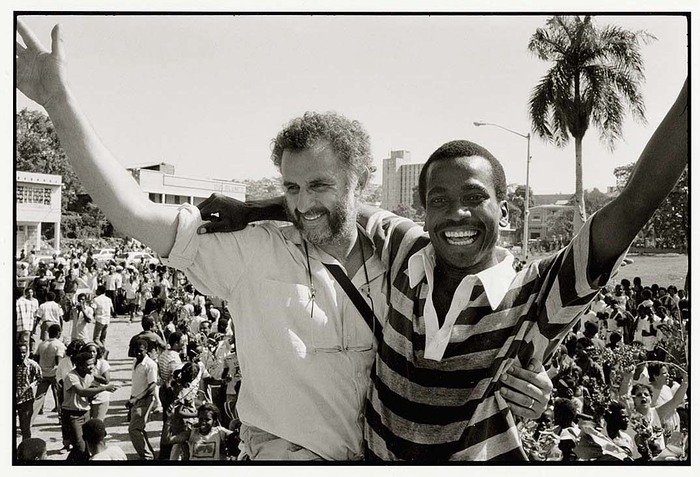 Brooklyn native Danny Lyon received a BA in history in 1963 from the University of Chicago, where he served as staff photographer for the Student Non-Violent Coordinating Committee. A self-taught photographer, he traveled with the Chicago Outlaws motorcycle club in 1965-1966 and published his pictures of the club members as The Bikeriders (1968). Since 1967 he has been an independent photographer and an associate at Magnum, and he has made films since 1969. Lyon has received Guggenheim Fellowships in photography and filmmaking, and his work has been included in many major exhibitions, including Toward a Social Landscape at the George Eastman House. His first solo exhibition was held at the Art Institute of Chicago. In addition to The Bikeriders, Lyon has published a number of photographic books based upon his experiences with a group of people or in a particular place, among them The Movement (1964), about the Civil Rights movement, and Conversations with the Dead (1971), a study of life in Texas prisons. Among the films he has produced are Social Services 127, Los Niños Abandonados, and Little Boy.
Personal participation in the lives of his subjects is vital component to Danny Lyon's photography. His subjects often deviate from societal norms, yet he is dedicated to communicating their character and sensibility honestly, sympathetically, and nonjudgmentally; for him this requires firsthand knowledge of their experiences. Whereas in his earlier work he seemed to withhold his own personality from the images in order to emphasize that of his subjects, his recent work includes more of himself. Lyon has consistently produced effective, sincere documents of real people's lives that have inspired many photographers since the 1960s.
Lisa Hostetler
Handy et al. Reflections in a Glass Eye: Works from the International Center of Photography Collection, New York: Bulfinch Press in association with the International Center of Photography, 1999, p. 221.
Link on Luminous-Lint