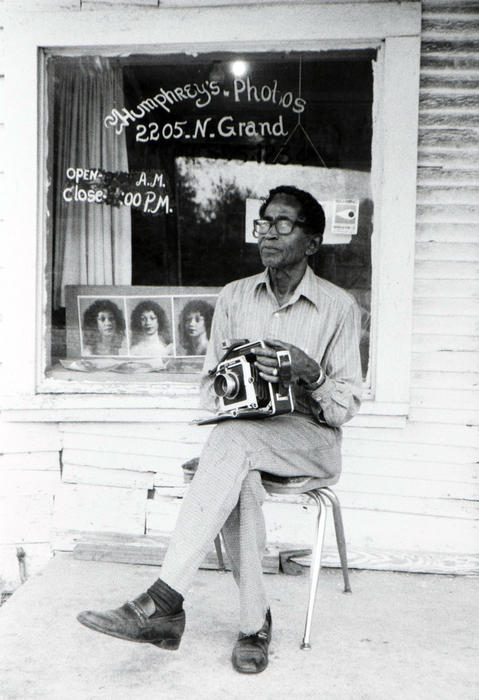 
Curtis Humphrey, professional photographer, was born December 14, 1907 in Dirgin, Rusk County, Texas to John and Virginia Brown Humphrey. His formal education ended in the fifth grade. He worked at odd jobs, including construction, railroads, department stores, and shoe stores and by 1932 was located in Fort Worth. There he met Harry Garonzik and Harry Berkman, who introduced Humphrey to photography. Learning rapidly, he went into business for himself in Dallas and employed family members. Dewitt Humphrey, Curtis’s brother, later formed his own business and operated in Dallas through the 1970s.
Humphrey entered the U.S. Air Force in 1942, where he continued professional photography while stationed at McDill Field, Tampa, Florida. After discharge in 1945 he moved to Marshall, Texas and taught photography at Wiley College. In 1947 he went to Tyler, Texas to teach photography to veterans and others at Texas College and also set up a studio.
In 1952 Humphrey was released from his teaching position because of his lack of high school, college or graduate education and returned to full-time commercial photography. He maintained a studio on North Grand Avenue in Tyler from 1948 until 1995 when age and illness forced him to quit. Allen Jones, Jr. was a partner in the business from 1972 to the mid-1980s. Curtis Humphrey died April 27, 1996.
Curtis Humphrey was married to Ester Mae Moreland; they had two daughters and three sons. An oral history with Humphrey and examples of his work appear in Portraits of Community: African American Photography in Texas (Austin: Texas State Historical Association, 1996).
Video by Alan Govenar and Bob Tullier: The Photography of Curtis Humphrey.
HUMPHREY (CURTIS) PHOTOGRAPH COLLECTION, 1950–1992
20 feet; photographic, manuscript, printed.
2,161 black and white prints
410 color prints
16,000 film negatives