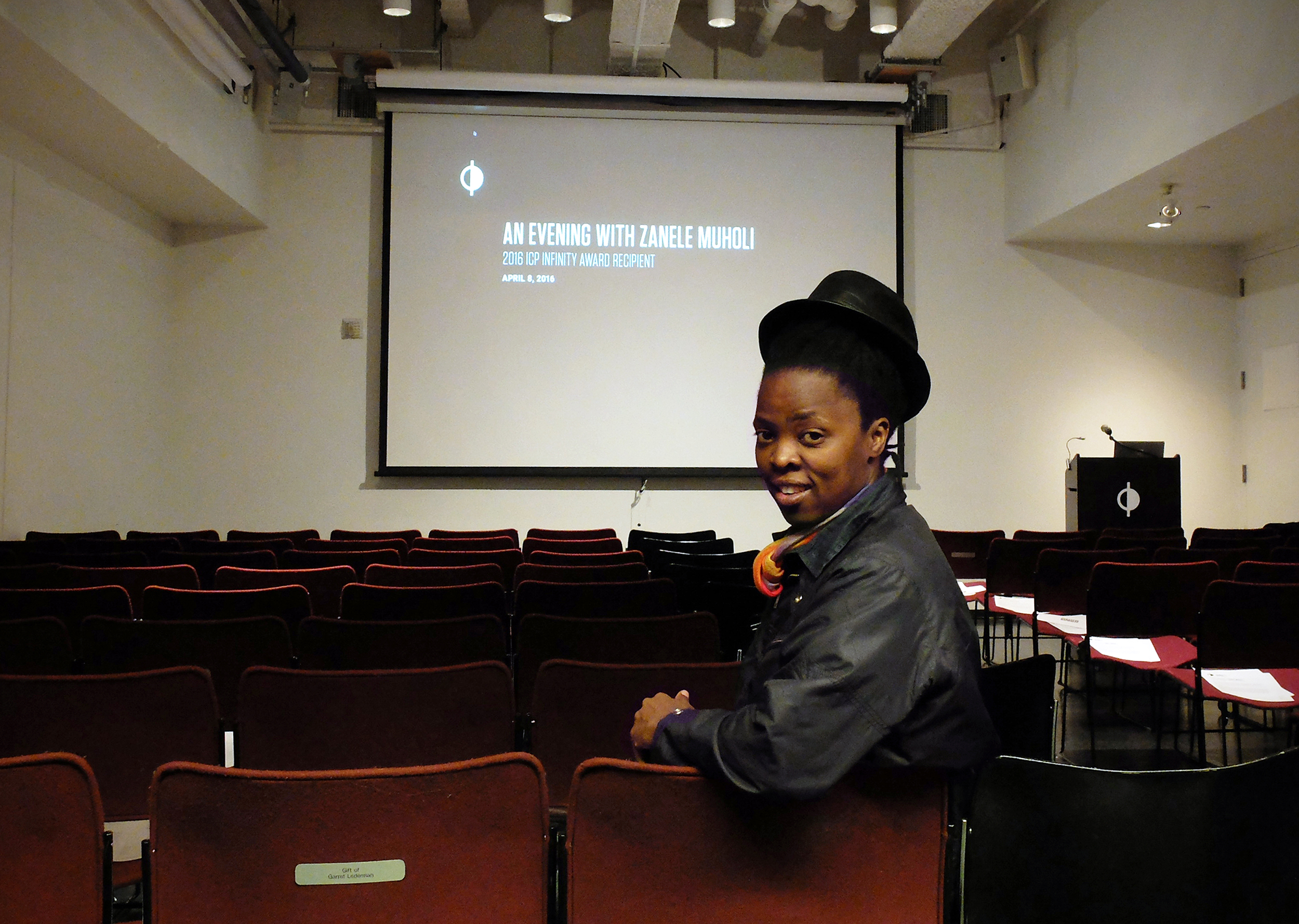 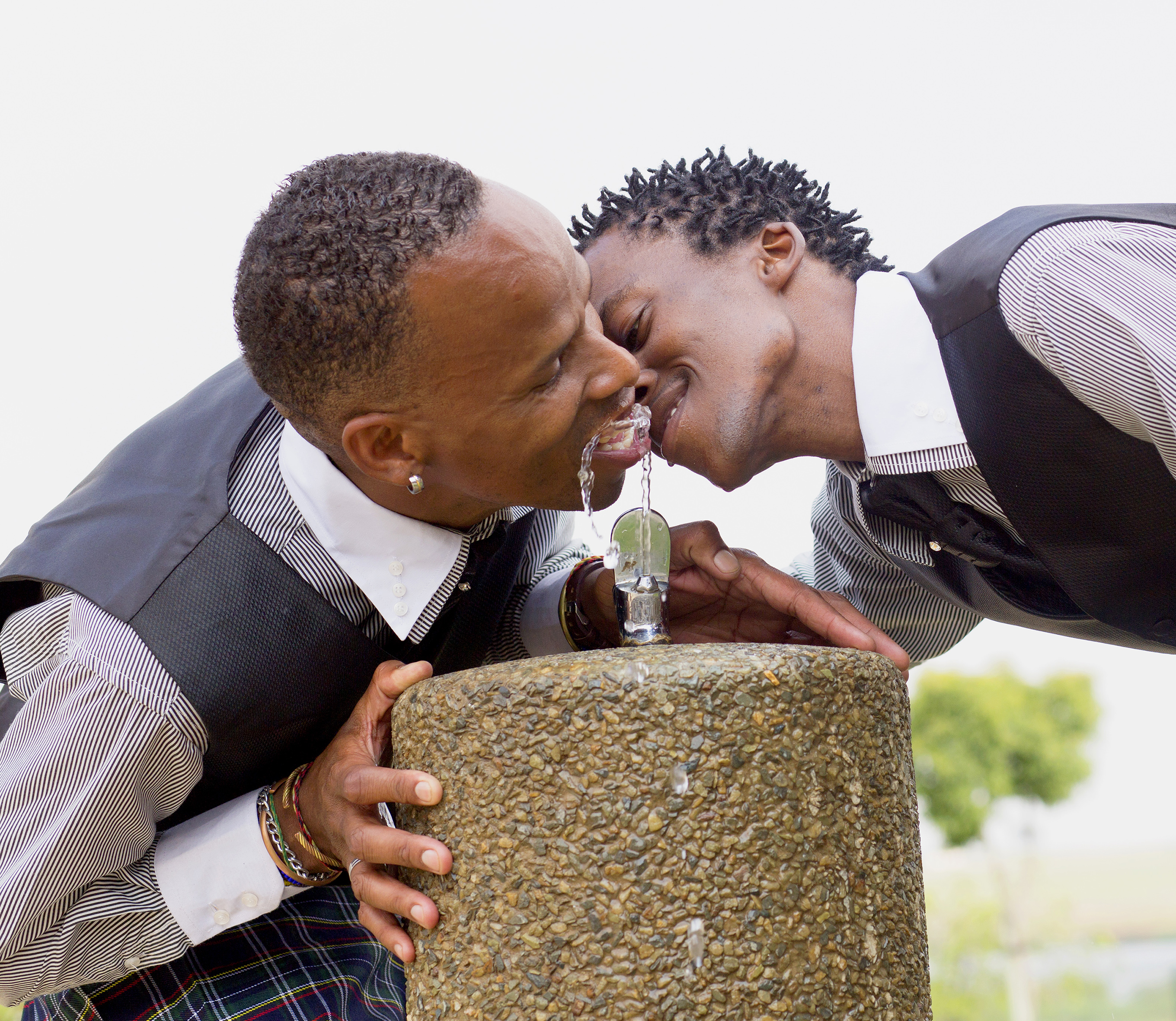 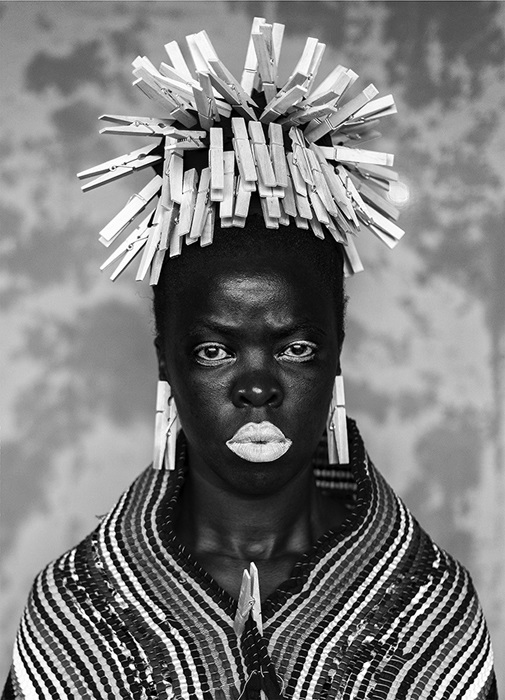 Shifting the Negative: An Evening with Zanele Muholi

For almost an hour after Zanele Muholi’s lecture at ICP on April 8, 2016, the South African photographer greeted an endless line of audience members who wanted to thank her, take photos with her, and share stories. Just steps from the podium where Muholi welcomed the room with the words, “If you have any questions, don’t take them home. Ask me,” the self-described visual activist was as welcoming of New York as we were of her and her profoundly moving work.

Zanele Muholi before her lecture at ICP on April 8, 2016. Photo by Michael Mooney.

An award-winning photographer and 2016 recipient of ICP’s Infinity Award for Documentary and Photojournalism, Muholi presented several portraits from her recent book, Faces and Phases, a clip from Zanele Muholi, Visual Activist co-produced with Human Rights Watch, and a selection of recent self-portraits. Working with and within the communities she belongs to, Muholi situates her work as visual activism out of necessity. Inseparable from her very existence is an irreversible sense of urgency: “one of the most painful parts of photographing the community is when someone dies.”

South African society is reeling in perpetual trauma from apartheid, the HIV/AIDS epidemic, and an increasing number of LGBTI hate crimes. Homosexuality is coded as un-African, an imperial poison imported from white oppressors. This codification alone is a prime example of the enduring, virulent erasure of colonialism: although words like homosexual, bisexual, gay, and lesbian do not historically have direct translations into local African languages, queer concepts and practices have traditionally been integrated into African societies. In the 1600s, an Italian missionary, Cavazzi da Montecucculo, and a Portuguese military historian, Oliveira de Cardonega, both acknowledged, with predictable European shock, the presence of sodomy among African men.1

“2012 was one of the most painful years in our history. We lost a lot of members of our communities. Hate crimes, curative rapes, and lesbian murders become part of the brutality that is stained in our brains forever. We live in fear.” – Zanele Muholi

According to 2015 and 2014 police reports, there are 147 rape cases per day in South Africa. Most cases remain unreported, for fear of retaliation, humiliation, economic dependence on the attacker, and general lack of services. Determined to “redefine the face of Africa,” Muholi has responded to these circumstances by working to “preserve and produce a history, create an archive we never had before. All these movements in our lives are about different generations. The generation that came before me, before I came out, is no longer there, or is a generation that never had an opportunity to be documented due to so many violations and discriminations that took place before us. We’re living in a period in South Africa that is interesting and challenging. We have this constitution that says we have the right to live, but at the same time there is on-going violence.”

In the video Zanele Muholi, Visual Activist, we see a dog in a domestic setting where a photoshoot is taking place. Muholi lamented that the dog “was poisoned and died the following year. Even those little things that make us happy, our pets, they count, they are part of our families.” In another scene, Muholi braids Tumi Nkopane’s hair while discussing an article Tumi had recently published on lesbian health. As Muholi describes the township where they are (“This township was so popular with, um…”), Tumi cuts in by saying “murders.” Muholi shifts the tone of the conversation by quickly affirming “No! Gay lives. There are a lot of gay people in kwaThema and it has become notorious for hate crimes because in 2008 a black lesbian [Eudy Simelane] was brutally murdered here.” Muholi explicitly frames these hate crimes as the targeted loss of queer lives, not merely murders without cultural implication.

“One cannot limit documentary photography into only one thing, where you look at only Pride. We need to look at Pride and also look at different forms of violations taking place while people are supposed to be celebrating themselves. Instead of consuming the celebration, we find ourselves commemorating the lives of those who we lost along the way.” – Zanele Muholi

The lesbian funeral has become a social rite in South Africa: “We all document the lesbian the funeral [sic]. All of us come together in one space and share, you make that document viral [sic]. We want to say to our government that this is what we are talking about when we talk of a lesbian funeral. I wish we could find positive lesbian icons. We always find brutal murders. There’s nothing that focuses on same sex love versus these hate crimes. When do we start talking about intimacy? This intimacy that disrupts the perpetrator leads to us being killed.”

Working only with people who are already out as gay, lesbian, and trans, Muholi doesn’t get paid for documenting the queer weddings she’s been photographing for years. In exchange for up to 10 prints for exhibition, Muholi will document the celebration. The very first legal gay wedding in kwaThema was photographed by Muholi. Only one half of that happy couple is alive today.

Muholi’s relationship to her role as a photographer is overtly rooted in lesbian feminist practices of disrupting spheres of influence, and using social tools to generate empowerment. The prevalent terminologies of Western discourses on photography have little resonance for Muholi, who prioritizes how “important relationships are between the photographers and those who are photographed. [This] is why I call most of the people in my work participants rather than subjects.” Muholi made clear how the language of photography itself projects a photographer’s involvement: “With ‘subject’ you end up distancing yourself away from the subject. We’re not photographing objects, these are human beings and lives.” Only an outsider has the privilege of seeking a “subject.” The circumstances surrounding her personal and political subjectivity leave Muholi little choice but to reimagine the possibilities for individual and collective survival, from within the community, not as a subjectification of statistics.

Muholi’s self-portraits confront issues of ongoing racism through the organization of spontaneous arrangements on her body. Using different materials and objects, each image relates to a historical event, a stereotype to be broken, an experience. One image shows Muholi in Malmo, Sweden with dozens of white chopsticks in her hair, “because black people aren’t supposed to like sushi.” Muholi described this photographic practice as “very therapeutic...it’s me dealing with my own issues...responding to events.” In direct ways that sometimes feel comical and surreal, this series tackles the weight that perceptions create when imposed onto a black body.

“In each photograph that I take, there is a longing for me.” – Zanele Muholi

Frustrated by the high cost of photography and all its peripherals, and despite a 2012 burglary at her home that left her without five years of work, Muholi continues building an archive of queer African people. “I continue to train with or without funding because if I wait for someone to validate my existence, I am shortchanging myself. Recently we had to decide whether we buy a fridge or a new lens.” In an environment where existing as queer is both high-risk and an act of resistance, Muholi uses the power of relationships to organize and to strategize how to survive in the face of everyday hostility. By engaging the tradition of portraiture, Muholi creates space for high-risk lives to reimagine their own survival and their own depictions as survivors.

The formality of the portraits in Faces and Phases directs attention to individual distinction. Typical visual depictions of victims are avoided and participants look glamorous and stylish, confident in their self-expression. Looking good is a gift they give each other, and exactly the kind of positive energy the community needs. Survival is not a superficial act, and Muholi uses each person’s imagined self-actualization to bring the community together, creating a radical act of resistance. Photography is a tool that entered Africa under an agenda of subjugation through portraiture. By using photography to combat the visual and physical erasure of her social circle, Muholi subverts the power photography has had on the continent by using it explicitly as a tool for liberation. In doing so, Muholi is developing new representations of how photography functions culturally and temporally within Africa.

News 2016 INFINITY AWARD: DOCUMENTARY AND PHOTOJ... Event Insider/Outsider: Voyeur or Agent of Change? Event Joan Liftin: Lecture and Book Signing Perspective Gillian Laub | #ICPtalks
This website stores cookies on your computer. These cookies are used to collect information about how you interact with our website and allow us to remember you. We use this information in order to improve and customize your browsing experience and for analytics and metrics about our visitors both on this website and other media. To find out more about the cookies we use, see our Privacy Policy.
I Accept I Decline