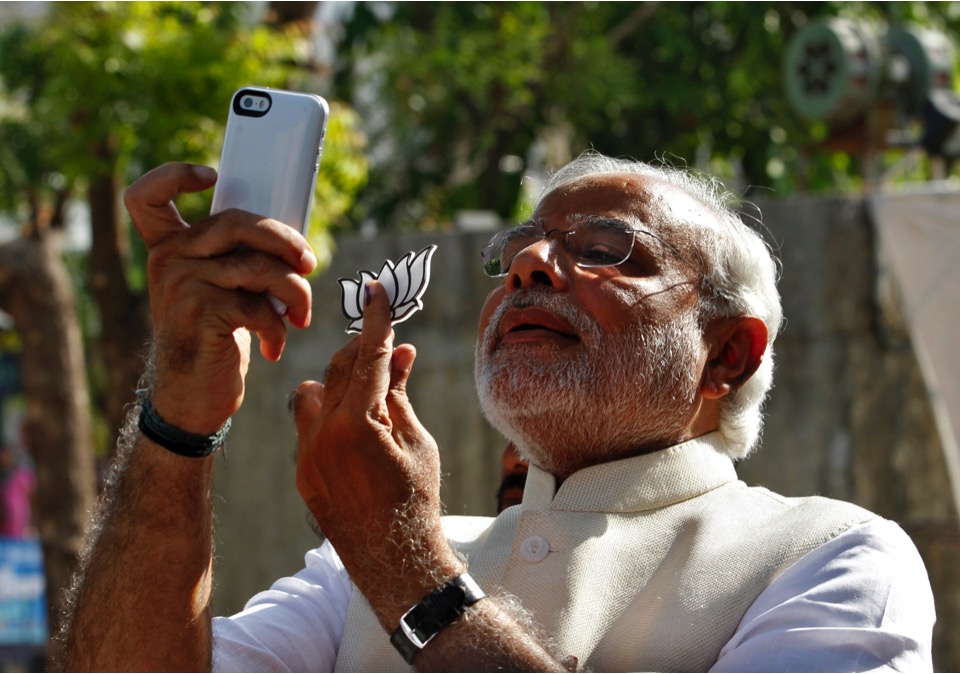 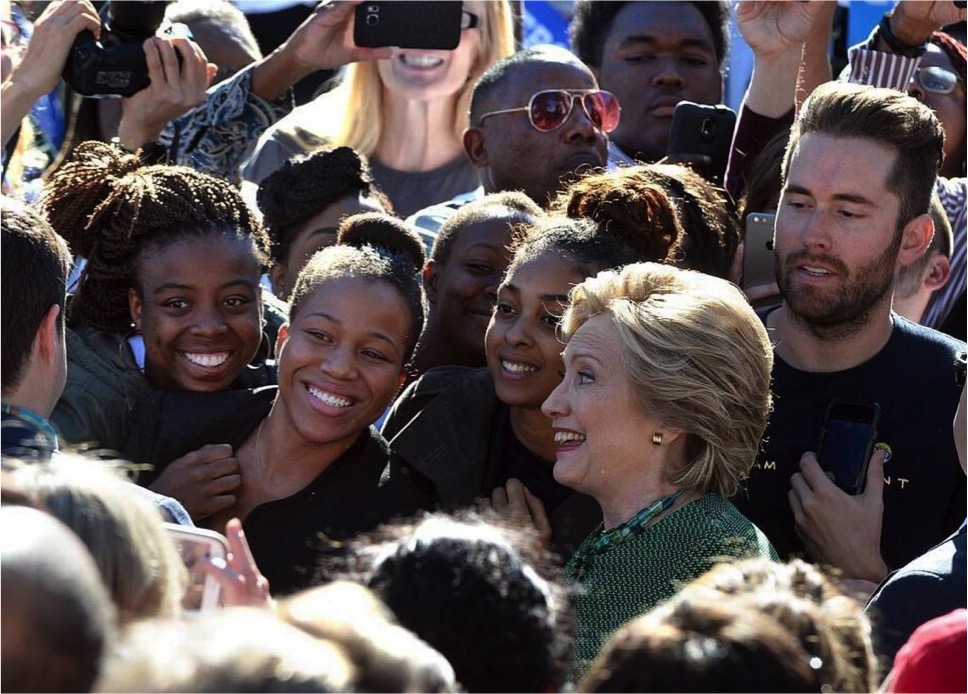 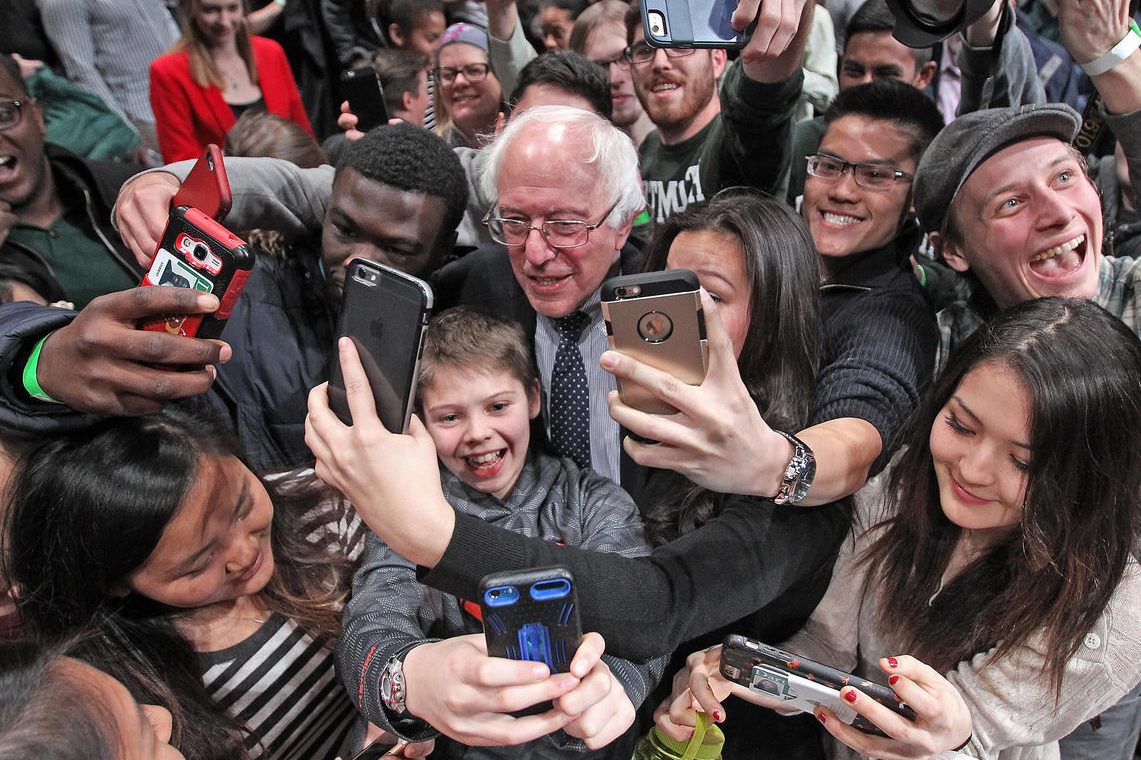 At a crowded rope line, a candidate leans in, inserting arms into the crowd like a child picking berries from a bush. Handshakes follow thank-yous and then a smartphone appears. The candidate grabs the phone—a deeply intimate act given all the secrets and germs we collect on our devices—and takes a selfie with a supporter. In that moment there’s a connection that transcends bumper stickers or even a knock at the door. Now there is a one-of-a-kind but infinitely reproducible image of a candidate and a supporter, begging to be shared. Selfies with presidential candidates are American electoral politics in a microcosm: at once intensely personal and inconceivably vast, a personalized memento manufactured at the speed of a news cycle.

Considering the popular perception of selfies, it is a wonder that politicians even take them. Taking a selfie and running for public office often receive the same criticisms: they are acts of vanity that are irredeemably contrived and inauthentic. Given the record-low approval ratings of most public institutions, it seems equally unlikely that the average citizen would seek out a photo with a political candidate. What is there to gain for either the supporter or the candidate to be seen with each other?

The answer lies in peoples’ ongoing struggles with their visibility to others. Privacy and publicity are often confronted in dangerously extreme terms. The word “publicity” conjures images of corporate public relations and celebrity gossip. Privacy is, for moments, shared with our closest companions or our own thoughts. Most of human life, however, is spent between these extremes, and taking photos with politicians highlights the complicated nature of visibility. For every potential audience, both real and imagined, there is a self to be shared. This is neither deception nor vanity. Privacy, publicity, audiences, and the self are deeply intertwined: defining one another through their absence, or presence, in any given situation or context. The self, sociologists Jaber F. Gubrium and James Holstein have argued, is not so much a static identity as a story. It is a story made out of our past experiences, future hopes, and immediate surroundings. We change it and abbreviate it depending on context and audience but it is in the telling that we find anything approaching a “true” self.

That self is not a given; it is made and learned like language. Or, as the prominent nineteenth-century sociologist George Herbert Mead put it, “The self is something which has a development; it is not initially there, at birth, but arises in the process of social experience and activity.” Just like languages, some of us are fluent in multiple means of communication while others struggle to make a connection with a single person. When we take a photo with a political candidate (or of our food) we are not only stating an allegiance, we are saying something about who we are. Theresa M. Senft and Nancy K. Baym, in their introduction to a special issue on selfies of the International Journal of Communication, note that: “First and foremost, a selfie is a photographic object that initiates the transmission of human feeling in the form of a relationship.” That relationship might be intimate—a photograph meant for a single recipient—or very public, as when politicians post photos on their own accounts to share with their supporters.

Selfies, then, are aptly named because just about every part of the photo contributes to the story of the self. Senft and Baym go on to say that “selfies function both as a practice of everyday life and as the object of politicizing discourses about how people ought to represent, document, and share their behaviors.” It is this process of constructing one’s identity that is crucial to understanding why selfies with political candidates happen at all. Rather than two photographic subjects, there is a single political object: a candidate-supporter dyad that is mutually beneficial to its constituent characters. It must be mutually beneficial or candidates would not spend precious time pausing to take them and supporters would not clamor to ask for them.

Donald Trump’s authoritarian populism and Hillary Clinton’s historical status as the first woman to become general-election candidate of a major political party are powerful rhetorical tools, but they both run counter to something equally important: the idea that the candidates are likeable and approachable people. Narendra Modi, the prime minister of India, had a similar problem in his 2014 election. His popularity was monumental and his campaign wanted potential voters to feel as though they could peer behind the curtain. Communications scholar Anirban K. Baishya has observed that the tactical deployment of selfies helped Modi convey “the sense of a more believable person rather than an inaccessible icon.” Selfies let politicians have it both ways: icon-celebrity status and accessible, expressive authenticity.

Image by Amit Dave for Reuters

And yet, media accounts of selfies as exercises in vanity pose a danger to some candidates’ likeability. Men, especially Trump, can bask and even revel in their vainglorious posturing, but everyone else has to be a modest, almost begrudging, selfie taker. The Clinton campaign has gone out of its way to not only clear time for the candidate to take photos with her supporters, but to use the selfie as a starting point for a flurry of headlines about her relationship with supporters and close confidants. In the month of February, 2016, Esquire, People, Time, BBC, and The Hill all ran stories about Clinton’s relationship to the selfie, including who she’s taken them with, how she has learned to master the form, and her concerns that the selfie has replaced conversations at the rope line. In her interview with Esquire, Clinton goes so far as to bemoan the “tyranny of the selfie” and its supposed ability to supplant conversation.

Image by Chuck Liddy for the News & Observer

The supporter who takes a selfie is at once a micro-surrogate for the candidate and the potential recipient of an influx of likes and other popularity metrics. Your selfie with Bernie Sanders can stand as a prominent but passive form of protest against the democratic primary election. Every time you comment on a political story there you are, standing with giddy excitement next to the Vermont senator. More generally though, a photo with nearly any presidential candidate can distinguish you as engaged in mainstream politics: you are someone who participates in the political process.

While the supporter may draw a bit of social capital, the candidate gains an air of authenticity. A selfie with a candidate reveals that, in spite of all the professional messaging and the relatively small chance that a candidate will deliver on their promise, elections are still about deeply held sentiments. They are about seeing one’s future nestled in the warm words of a soaring speech or in the hot anger that propels future security states.

Through what sociologist Nathan Jurgenson has called our “documentary vision” we see the world as a series of potential social-media posts. In this way, selfies with politicians also demonstrate the complicated interactions between publicity and privacy: intentionally public displays of allegiance have a way of illuminating deeper, more private aspects of our selves. When we go to a rally we are not only looking to engage in politics in that moment but we are also in search of a photo, video, or some other media artifact that will communicate to others that we were there.

Image by Matt Stone for the Boston Herald

Humans have always done something like this: looked for stories and anecdotes to tell our friends at the water cooler or bar, but social media asks that we make specific decisions—in the moment—about what to capture. A popular interpretation of this sort of behavior is that our documentary practices are self-centered and take you out of the moment and into a device, but even this short discussion about the self makes such a claim seem not only incorrect but nonsensical. If the self is a story we tell others, then even as we are thinking about ourselves we are thinking of others—not just their judgments but our relationships with them as well. Moments are made as much as they are experienced and our documentary vision provides a wide palette to play with. For a politician this is the most precious prize of all: to carve out some space on that palette and be bound up in an intimate story about our relationship with others.

From campaign lapel buttons to bumper stickers, political candidates have always sought out a way to incorporate their brand into our presentations of self. The selfie provides an opportunity to do so much more: to inject a political message into our own stories. Posing with power makes us surrogates and deliverers of authenticity. Unlike a lapel button, however, a single digital photo has the ability to travel great distances almost instantaneously. The political subject of the selfie requires our participation and this opens the door for satire, resistance, and a whole host of new political messages that dovetail with or run against the political choices on offer. It is in this affordance that the selfie demonstrates its greatest liberatory potentials and gravest dangers.

David A. Banks is an interdisciplinary researcher, an organizing committee member of the Theorizing the Web conference, and an editor of The Society Pages’s technology & society blog Cyborgology. David’s work focuses on the intersections of digital networks, urban form, and structures of power. He holds a PhD in Science and Technology Studies from Rensselaer Polytechnic Institute and a BA in Urban Studies from New College of Florida. His work has been featured in Real Life, The New Inquiry, Tikkun Magazine, The Baffler Blog, and McSweeney's Internet Tendency.

This piece was originally published on publicprivatesecret.org on October 28, 2016.

Related Items
Exhibition Public, Private, Secret Event Photographing Politics: Campaigns, Protests... Event Tools and Tactics: New Media and the Presid... Event Democratization of the Image Interview ICP Alumni Spotlight: Sarah Blesener
This website stores cookies on your computer. These cookies are used to collect information about how you interact with our website and allow us to remember you. We use this information in order to improve and customize your browsing experience and for analytics and metrics about our visitors both on this website and other media. To find out more about the cookies we use, see our Privacy Policy.
I Accept I Decline