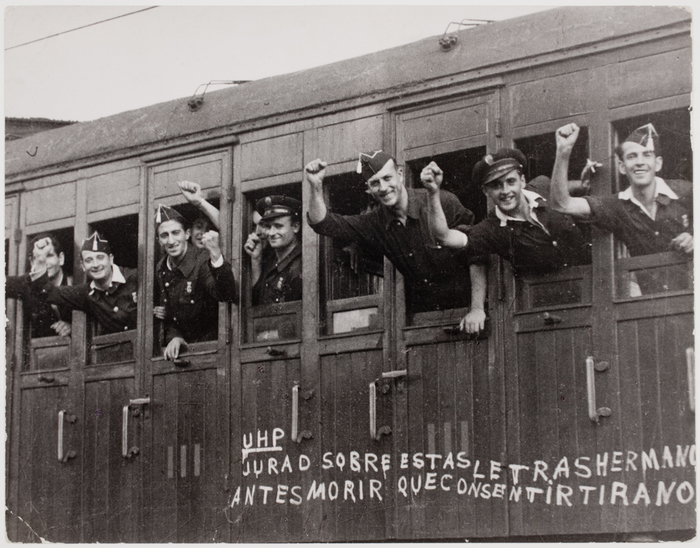 NEW YORK, NY (August 25, 2022)—The first major monographic exhibition to tell the story of Robert Capa’s influential 1938 wartime photobook, Death in the Making: Reexamining the Iconic Spanish Civil War Photobook will be on view at the International Center of Photography (ICP) from September 30, 2022 through January 9, 2023. The exhibition brings together nearly 75 original photographs and related ephemera to offer new insight into the book Death in the Making, a touchstone in the history of war photography that resonates today. In addition to work by Hungarian photojournalist Robert Capa, the exhibition presents new scholarship to properly credit the contributions of Polish-American photojournalist Chim (David Seymour), and German photojournalist Gerda Taro. The book is dedicated to Taro and was published in the wake of her death at the Spanish front in July 1937. The show, curated by Cynthia Young, former curator of the Robert Capa and Cornell Capa Archive at ICP, is accompanied by a 2020 edition of the book Death in the Making, published by Damiani/ICP.

Death in the Making: Reexamining the Iconic Spanish Civil War Photobook represents the first in an ongoing series of exhibitions that revisit and highlight ICP’s permanent collection and celebrate its history. ICP was founded in 1974 by photojournalist Cornell Capa, who championed “concerned photography.” Cornell was the brother of Robert Capa, who founded Magnum Photos in 1947.

Capa, Taro, and Chim’s work in 1930s Spain set a precedent for photojournalists covering war, with parallels in subject that can be seen in contemporary war coverage. The book, Capa’s first, was in part a propaganda effort to raise awareness and support for Republican Spain to help defeat the fascist General Francisco Franco. New York, where the book was published, was a hotbed of activity for the Republican side, challenged by the loyalty of powerful Catholic leaders to Franco. The events of the Spanish Civil War sparked an international support effort, from raising funds to sending supplies to international volunteers who fought in Spain.

“As we celebrate ICP’s history by revisiting collection highlights in a contemporary context, Death in the Making presents audiences with new insight into the historically resonant contributions of Robert Capa, Chim, and Gerda Taro,” said David E. Little, Executive Director of ICP, “and, as evidenced in recent photographs of the Russia-Ukraine War, points to photography’s ongoing relevance in political discourse, debate, and action.”

Background
Created in 1938 when Robert Capa was 24 years old, the Death in the Making book incorporates images by Capa, Taro, and Chim to express a passionate vision and commitment to what they viewed as one of the greatest fights for democracy. The book’s images and text chronicle the arc of momentary triumphs and wartime terror during the Republican fight to defeat General Francisco Franco’s fascist insurrection against Spain’s democratically elected government. The war did not end until 1939, but in the fall of 1937, as the book was being made, it was clear that Republican Spain was suffering, betrayed by the noninterventionist positions of many European countries and the United States. The visual requiem extends to the many that had already died fighting.

Initially, there was limited distribution of the book, yet over time it became iconic in the history of photographic books. The remastered 2020 edition is an exact reproduction of the original design and layout by Hungarian photographer André Kertész, with a preface by American journalist Jay Allen. It is produced with new scans of original prints and negatives, a new essay by Cynthia Young, and a complete illustrated checklist of the photographs that clearly identifies each photographer’s contributions.

Exhibition Highlights
Death in the Making: Reexamining the Iconic Spanish Civil War Photobook consists of nearly 75 photographs along with more than 25 ephemera items, including magazines and printed matter of the period, as well as related letters, and copies of the original book, all from the ICP archive. Although the original book did not identify work by each photographer, new archival research on the vintage prints has revealed that several Taro prints were mislabeled as Capa’s work, and Chim’s efforts were obfuscated entirely. Each photographer is now properly credited for their contributions to this seminal work for the first time.

The exhibition is organized thematically in accordance with the book – from the initial exuberance at the start of the war to the later reality of wounded and dead soldiers, the preservation and destruction of cultural artifacts, the contribution of peasants to the war effort, the defense of Madrid, civilian life disrupted, and the brutality of the air raids by German and Italian airplanes. Among the magazines on view are copies of Vu, a French pictorial magazine, and Regards, a French Communist title known for photojournalism, which published work by Capa, Taro, and Chim. Kertész’s 1934 book, Paris Vu, will also be on display.

Death in the Making: Reexamining the Iconic Spanish Civil War Photobook is the first exhibition of the prints since the 1938 show Life in the Making, held at the New School for Social Research in New York following the release of the book. “This exhibition and new edition of the book is part of the ongoing process of focused research on the Capa, Taro, and Chim archives at ICP,” said Cynthia Young. “Their work in Spain continues to remind us of the cyclical devastation of war and the importance of fighting for democratic ideals and against authoritarian leaders.”

On view concurrently at ICP is Close Enough: New Perspectives from 12 Women Photographers of Magnum, which presents pivotal long-term projects from 12 emerging and established contemporary women photographers of Magnum Photos. Both ICP fall exhibitions explore how photographers embed themselves in their subject matter to document people, places, daily life, and world events through compelling images that ask audiences to reflect on gender, war, and history.

“These two exhibitions bring into focus the many foundational links between Magnum Photos, its founders and ICP, including the significance of pioneering photojournalist Gerda Taro, who inspired generations of photographers, especially women making their way in the field,” added Little.

About the Artists
Robert Capa (1913-1954) is one of the most well-known photojournalists of the 20th century. Born Endre Ernӧ Friedmann in Budapest, Hungary, to a Jewish family of tailors, he studied in Berlin, then fled to Paris in 1933. Quickly gaining an international reputation for his photographs of the Spanish Civil War, he later escaped to New York in 1939. He covered World War II as an Allied photographer, cofounded Magnum Photos in 1947 (with Chim, among others), and made several books based on his photographs of the war, the USSR, and Israel. He died after stepping on a landmine in 1954 in Thai-Binh, Indochina.

Chim (1911-1956), born Dawid Szymin in Warsaw, Poland, arrived in Paris in 1932 and within two years was a regular contributor to Regards magazine with his photographs of the Popular Front. He covered the entirety of the Spanish Civil War and escaped France in 1939 for New York. He returned to Europe in 1947 and established himself as a foreign correspondent with the byline David Seymour. In 1956, he was killed while covering the Suez Crisis.

Gerda Taro (1910-1937) was one of the first women to be recognized as a photojournalist, and as such, the first to be killed while reporting on war. Born Gerta Pohorylle in Stuttgart, Germany, and raised in Leipzig in a middle-class Jewish family, she fled to Paris in 1933. She traveled back and forth from Paris to Spain for the first year of the Spanish Civil War; and while covering the Battle of Brunete in 1937, she was struck by a tank and died.

About the Curator
Cynthia Young has curated numerous exhibitions on photojournalism in the 1930-50s, including Capa in Color; We Went Back: Photographs from Europe 1933-1956 by Chim and The Mexican Suitcase: The Rediscovered Spanish Civil War Negatives of Robert Capa, Chim and Gerda Taro. These exhibitions traveled widely to multiple venues in France, Spain, Italy, Mexico, Brazil, Hungary and Sweden. She was until 2020 the curator of the Robert Capa and Cornell Capa Archive at ICP, where she worked since 2000.

Exhibition Access
ICP is open every day except Tuesday from 11 AM to 7 PM, and until 9 PM on Thursdays. Admission: $16 for adults; $12 for seniors (62 and over), students (with valid ID), military, and visitors with disabilities (caregivers are free); $3 for SNAP/EBT card holders; free for ICP members, ICP students, and all visitors 16 years and under. Admission is by suggested donation on Thursdays from 6 to 9 PM.

Admission to ICP is by timed ticketed entry only, to ensure limited capacity and other safety standards are met. Tickets can be reserved online at icp.org/tickets. Visitors are asked to arrive during the 30-minute window of their timed ticket to help ensure a safe flow in the lobby. For more information, read ICP’s updated Visitor Information and Accessibility guidelines and policies.

The International Center of Photography is the world’s leading institution dedicated to photography and visual culture. Cornell Capa founded ICP in 1974 to champion “concerned photography”—socially and politically minded images that can educate and change the world. Through our exhibitions, education programs, community outreach, and public programs, ICP offers an open forum for dialogue about the power of the image. Since its inception, ICP has presented more 700 exhibitions, provided thousands of classes, and hosted a wide variety of public programs. The International Center of Photography (ICP) launched its new integrated center on Manhattan’s Lower East Side in January 2020. Located at 79 Essex Street, ICP is the cultural anchor of Essex Crossing, one of the most highly anticipated and expansive mixed-use developments in New York City.

Image: Robert Capa, [Republican soldiers saluting through the windows of their departing train, Barcelona, Spain], August 1936. The Robert Capa and Cornell Capa Archive, Gift of Cornell and Edith Capa, 2010 (2010.86.16)
Press Release
This website stores cookies on your computer. These cookies are used to collect information about how you interact with our website and allow us to remember you. We use this information in order to improve and customize your browsing experience and for analytics and metrics about our visitors both on this website and other media. To find out more about the cookies we use, see our Privacy Policy.
I Accept I Decline