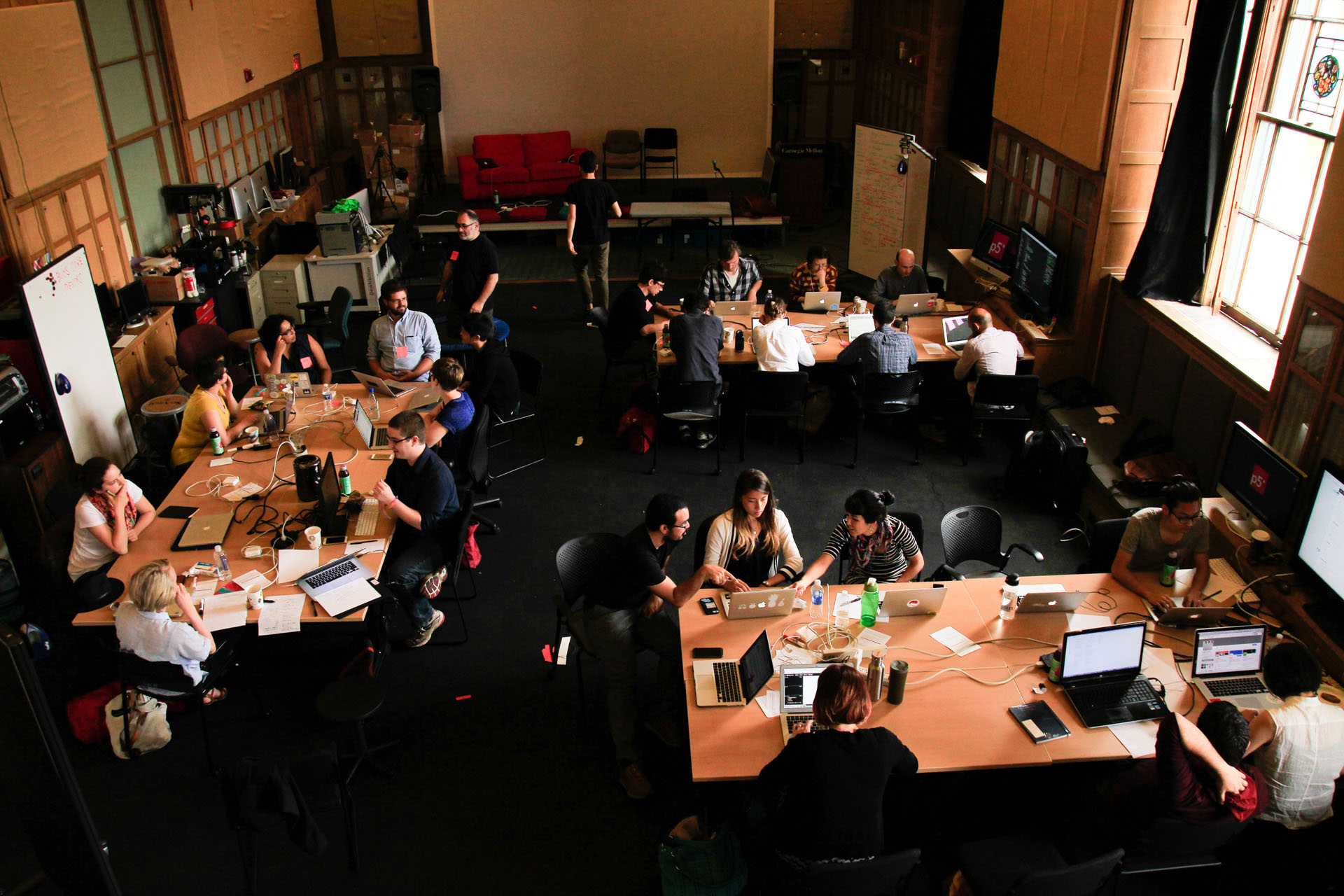 Charlotte Cotton: Johanna, it is a real pleasure to have collaborated with you on a series of events with the Processing Foundation Fellows. I’d like to start by asking you to describe the recently formed Processing Foundation, where you are Director of Initiatives, and its formation and aims.

Johanna Hedva: Thank you, Charlotte! The Processing Foundation was founded in 2012, more than ten years after the original Processing software was invented. The Foundation is the nonprofit organization that manages the development of Processing, and now p5.js and Processing.py. These three software projects are open source (free, non-proprietary, and community-made) and created by artists, for artists. The Foundation’s aim is to nurture the communities that make and use them. We have a Fellowship Program, which funds creative and technical research by artists, coders, and collectives; an Education Program, which develops curriculum and resources for educators in art and computer science departments; and an Initiatives Program, which I've been leading since 2014.

The Initiatives Program is an effort toward making our projects accessible to diverse groups, and addressing issues around access, like race, gender, sexuality, class, and ability. We do this by partnering with organizations—like the International Center of Photography!—to make community events that emphasize dialogue around social and political issues in the fields of art and technology.

CC: And the mission of the Processing Foundation is a primary reason why we wanted you to curate a series of events at the ICP Museum. Can you tell me about your motivations for setting up a Fellowship program at the Foundation?

JH: The Fellowship Program began informally in 2013 with Greg Borenstein, Lauren McCarthy, and Wilm Thoben, who were already active members of the Processing community. They were offered fellowships as a first iteration of the idea to fund new work that was part of their own practices and also aligned with projects the Foundation was interested in. This first round was informal in its timeline and requirements, and primarily led by the fellows’ own interests. For instance, Lauren McCarthy was interested in making a Processing library for JavaScript, which would require her to learn how to make it as she went along. Her fellowship was extended after a great finish on the first fellowship, and now is a thriving project—p5.js—that the Foundation continues to develop with her. Greg Borenstein and Wilm Thoben were hired to complete work on libraries that they were already building for their own practices, and which have been included in new releases of the Processing software.

These projects influenced how the Fellowship Program’s first open call, in 2015, was structured. For the 2016 Fellowships, we were looking for projects that ranged from exploratory research and software development, to community outreach initiatives that specifically addressed barriers around access. A fellow’s technical expertise was a lower priority than was their interest and enthusiasm in exploring a new topic and proposing a project that would expand what the Processing community can encompass. A fellow receives close mentorship and a stipend of $3,000, at $30/hour for a total of 100 hours, which can be completed anytime in a six-month period.

CC: The structure of your Fellowship Program is really interesting on a number of levels, not least the clarity of the labor and its remuneration. I don’t think that I have seen this clarified to such a degree within the realm of artists’ fellowships. I also wondered if you could also say more about the ethos of your Fellowship Program and specifically what you are suggesting for creative relationships with technology, what it says about technical expertise at this juncture of social history. I may be projecting here but it makes me think about the role of artists in technology and the breaking down of barriers to access.

JH: I love this question! Yes, the inclusion of how the fellows’ labor is paid for, and the specifics—or lack thereof—around when and where it can be performed, are directly related to how both open-source projects and artistic practices tend to function. Open-source projects are, by definition, entirely community made, maintained, and operated. They are based on volunteer systems, in that they require a lot of devotion and free and unpaid time. You might have a day job, and work on open-source on the weekends or at night; you might have some time between freelance work where you devote every waking hour to the project. But you do so because you are emotionally invested and you are part of a community who is too. This is, of course, also a lot like artistic practices: the precarity of them, the necessity that you be so devoted you are willing to forgo money for your labor, but also the inspiration, enthusiasm, and relationships that keep you committed. Our Fellowship program wants to highlight the good parts of this model—the passion and devotion, the community involvement—while trying to mitigate the bad—the unpaid labor.

You're right that our Program is based on an idea of how technology can be both a viable artistic medium as well as a model for sociality. The Adobe model—that software for creative work is expensive and proprietary, and how it's built is kept hidden from those who use it—represents everything we are trying not to do. This comes from a belief that software is a medium and a tool, and learning to program can be a creative, exploratory practice.

We are working with the question: what happens when artists, individually and as a collective, make their own tools? This is less about having technical expertise, per se, and more about wanting to participate in the process of building something, and learning the technical skills as a result. It also points to the fact that a community is a helpful and perhaps necessary component to the development of a new medium— as the history of photography as a medium also reveals.

CC: I suspect I have responded so much to the work that you are doing at the Processing Foundation in part because it’s such a shining example (and a parallel to photography) of perceiving software as a medium and then deeply considering how this new medium could be a tool for social change. Can you tell me about the kinds of projects that the Processing Fellows are developing with you?

JH: We are very excited about our 2016 Fellows, as this was the first time we held an open call for applications. For 2016, we awarded five fellowships—our most to date.

Allison Parrish is a poet who writes with code, or, you could say, a computer programmer who writes poetry. Her fellowship has been to develop a version of Processing that is written in the programming language Python.

Claire Kearney-Volpe’s fellowship work extends her research at the Ability Lab at NYU, which has advanced our software toward being accessible for blind and visually impaired people. It's an important question to consider what “visual programming” and “visual art” are, and how they can be newly conceived, from this perspective.

The Digital Citizens’ Lab, a design collective that focuses on civic technology, created tools for educators that can meet the needs of historically underserved children of color. They have been working on an interactive game, illustrated with comics, whose narrative can be re-written as the game is played.

Jess Klein and Atul Varma, who are designers interested in “building bridges between humans and machines,” have been working on accessibility in p5.js, in terms of human-centered usability.

Luisa Pereira and Tega Brain both teach at the intersections of computer science, engineering, and art. Their fellowship work has been to develop p5.js as a tool for teachers working in interdisciplinary fields, and to develop resources, discourse, and a sense of community in this burgeoning field.

CC: It’s a great honor for ICP to host three of the Processing Foundation Fellows’ projects as part of Public, Private, Secret’s public programming. Can you tell me about the wider picture of public engagement that you have planned and what its aims are?

JH: Likewise! It's been fantastic to work with you and ICP! Since its founding in 2001, Processing has enjoyed and relied on a robust community. One of the goals of starting the Foundation in 2012 has been to expand that community to groups who might not yet have felt invited into it. This feeling can happen for many reasons, from lack of resources, to impenetrable clique-ish vibes, to micro-aggressions, etc. In the fields of art and tech, the word "diversity" is often deployed these days as a business mandate, as something that will be better for the company first, its users second. We're striving toward a kind of diversity that is cultivated from a grassroots model: an effort toward diversity that is sensitive to why there's been a lack of it in the first place, and encourages the nuanced process of building something different. “Diversity” has little consequence if it is not responsive and supportive to the specificities of different groups. The aims for our public engagement programs are very much informed by this, and so strive to be human-scaled, collaborative, and shaped by discussion and interdependency within and between different communities.

This interview was originally published on publicprivatesecret.org on November 7, 2016.

Related Items
Exhibition Public, Private, Secret Interview Public, Private, Secret—Lucas Wrench with... Event Accessible Technology Event Coding Comic and STEM Teaching Event Learning to Teach
This website stores cookies on your computer. These cookies are used to collect information about how you interact with our website and allow us to remember you. We use this information in order to improve and customize your browsing experience and for analytics and metrics about our visitors both on this website and other media. To find out more about the cookies we use, see our Privacy Policy.
I Accept I Decline