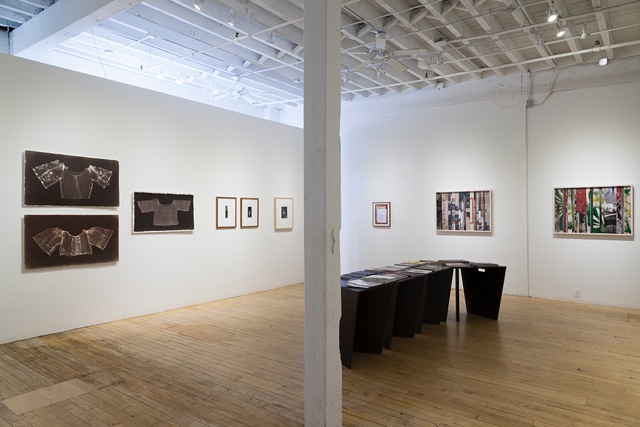 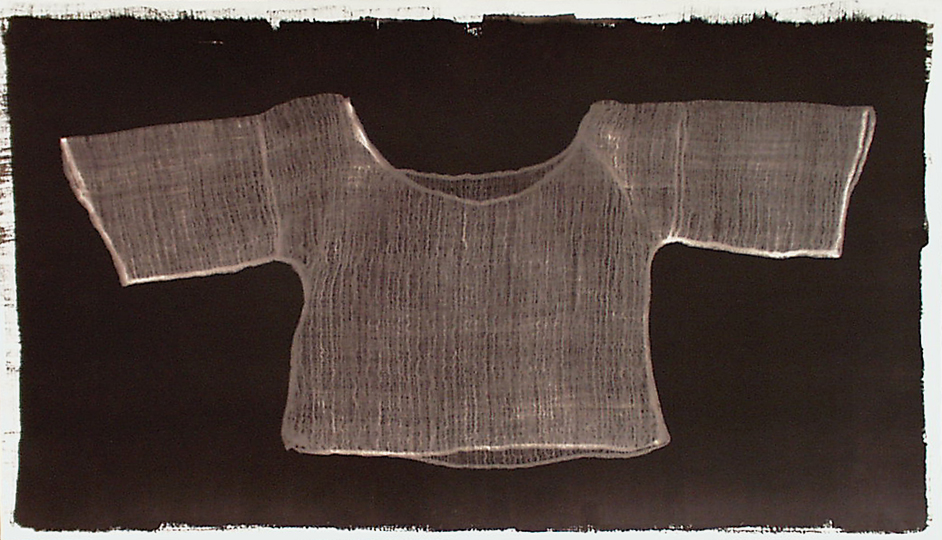 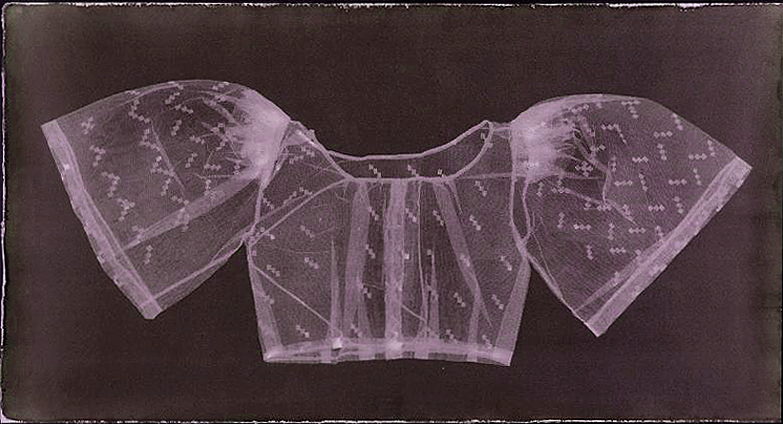 The photographer discusses the cyanotype/photogram process behind his ghostly "Saya Series".
Interview

Despite the slipperiness of memory, Louise Bourgeois insists that they are her documents and adds, "You have to differentiate between memories. Are you going to them or are they coming to you? If you are going to them, you are wasting time. Nostalgia is not productive." Documentation is often done to create an archive, a remembrance, but Bourgeois reverses this process choosing to rely on the mutable and the uncertain. The paradoxical place between memory and document is the location of the works in this exhibition.

Installation view of "I need my memories. They are my documents." at SepiaEye Gallery.

The group exhibition, I need my memories. They are my documents at SepiaEYE Gallery features photographs and videos by five artists who work with a repository of existing visual materials. The photograms of Neal Oshima engage with history albeit in a quasi-scientific vein. The Barot/Saya series uses traditional shirt, barot, worn by Filipino women with a skirt, saya. These garments, made from handwoven fibers like banana and pineapple plants, were popular in the period preceding the arrival of the Americans in the 19th century. Oshima culled them from several textile collections, selecting pieces that carried a sense of the original owner of the garments. By placing the object between the light source and the paper, Oshima retains the original scale of the baro. He then combines this objective view of the symbol of Filipino women, with the imperfections of the archaic Kallitype process, which uses hand coated light sensitive paper.

Nandita Raman: What drew you to the textiles in Philippines? How did you narrow down on the barot and saya amongst other exquisite dresses Philippines must have, I imagine? And why did you choose cyanotype photograms as the process?

Neal Oshima: My earliest work experience in photography was as a field and lab photographer at the Bishop Museum, during my undergraduate studies in Hawaii. There I became familiar with the work of Gregory Bateson, a fellow in my college, who with Margaret Mead had written, the seminal anthropologic study Balinese Character: A Photographic Analysis. During graduate school in San Francisco State University, while in an MFA program, I was able to take an amazing course on Visual Anthropology with Dr. John Collier that profoundly changed the way I looked at culture.

Since then I've been fortunate to photograph many of the best collections of antiquities and tribal art in the Philippines and the National Museums in many of the Southeast Asian countries. I've been lucky to document many of the living Philippine traditional Austronesia peoples, and I've always been interested in weaving traditions, having photographed half a dozen books on piña cloth, ikat, and other traditional textiles.

I chose the cyanotype/photogram process because of its ghostly, spectral qualities and because I wanted the prints to be the same size as the garments and the people who wore them. Also I've always loved the work of László Moholy-Nagy, and enjoy hand-coating emulsions.

In some of your other works like T'nalak weavers and Ancestral homes, you seem to documenting the craft and architecture of Philippines. Do you think documentation is an important part of your practice?

Definitely my background in anthropology and prehistory has influenced the way I see. But though much of my work has been involved with documentation, I've always felt that there was another layer that many artifacts and antiquities possess; that they are imbued with the personality of their maker and user. It was suggested to me that if we had the proper tools we could playback the conversation that a potter had had hundreds of years ago while throwing a clay bowl, like it was a phonograph record.

In my personal work I have tried to bring out the memories that objects may possess. I chose the piña garments from the Philippine colonial period because of their gossamer translucency and their cultural and historical significance but I selected the individual pieces because I recognized something of the personality of the person who wore them: signs of wear and tear, rips that had been mended or evidence that the wearer's body had shaped the piece.

How do you find yourself navigating Philippines as a Japanese artist? Do you have roots there?

I can hardly consider myself a Japanese artist, probably more of an Asian-American. My father's career as an economics professor took us from New York City, where I was born, to a childhood in Palo Alto, Seattle, Tokyo, Singapore, Manila, and Hawaii. A decade or so ago, I realized I had spent more of my life in Asia than anywhere else.

My art connects me to the Philippines. I think I have spent more time documenting traditional Philippine cultures than any other photographer in the country.

The choice of piña garments was interesting as piña cloth is made from the fibers of pineapple leaves. The pineapple came to the Philippines from Central America via the galleon trade, during the Spanish colonial period. Along with sugar cane and the banana, the pineapple was an important component of America’s colonial expansion in the Pacific when plantations were established in the Philippines and the Pacific Islands. My grandparents migrated from Japan in the early 1900s to work the pineapple plantations in Hawaii. I believe there's some kind of connection there.

In addition to craft what are your references? Do you like to read, listen to music? Is there a writer or musician who has influenced you?

I love Italo Calvino's Invisible Cities, a tale of Marco Polo telling Genghis Khan outrageous stories of the cities in his empire that the great Khan has never visited. Though he suspects that Marco Polo is embellishing these cities and he is merely recalling childhood memories of Venice, he can’t stop the nightly tales because he is so transfixed. This I think is the role of the artist, to take distant, moribund memories and give them life.

What are you working on currently?

One of my favorite photographic subjects has always been food. I've made a lot of images of Asian food, recipes, ingredients, cooks, and markets. Recently, I had the opportunity to spend several days photographing Helena Arzak and Andoni Adurritz, the Michelin-starred chefs of the restaurants Arzak and Mugaritz, while they were at work in the kitchen. These chefs are pioneers of molecular gastronomy, and they seem obsessed with the very small, nearly microscopic qualities of food. Whereas classical chefs wielded heavy cleavers, spatulas, and mixers, these modern cooks use tweezers, pipettes, test tubes, and centrifuges to realize their recipes.

In the French Pyrenees I was able to visit the fromagerie of the artisanal cheese maker Agour, who makes Ossau-Iraty, twice selected as the best cheese in the world. Sampling the newly curdled sheep's milk, I realized that it tasted exactly like any properly made curds, but what made it special was the bacteria that inhabited the walls of their caves where the wheels are aged.

So that’s what I am involved in: photographing the nearly invisible aspects of what we eat.

The group exhibition "I need my memories. They are my documents.”, curated by Nandita Raman and featuring works by Pradeep Dalal, Shambhavi Kaul, Osamu James Nakagawa, Neal Oshima, and Vivan Sundaram, is on view at sepiaEYE Gallery in New York City through October 31, 2015.

Nandita Raman
Related Items
School ICP-Bard MFA Interview Pradeep Dalal Interview Victor Sira of bookdummypress Interview Joseph Rodriguez Interview On Songbook: In Conversation with Alec Soth
This website stores cookies on your computer. These cookies are used to collect information about how you interact with our website and allow us to remember you. We use this information in order to improve and customize your browsing experience and for analytics and metrics about our visitors both on this website and other media. To find out more about the cookies we use, see our Privacy Policy.
I Accept I Decline