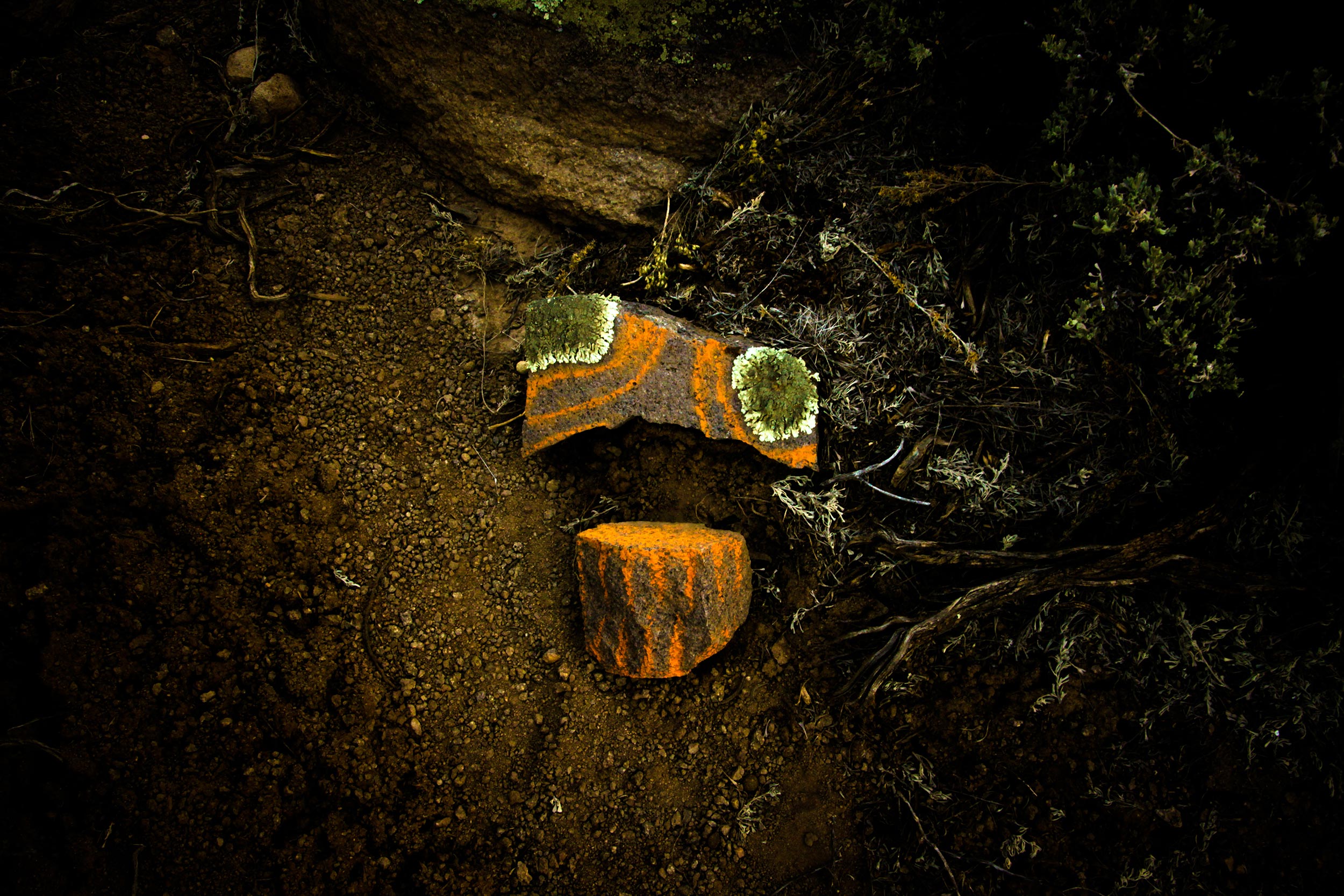 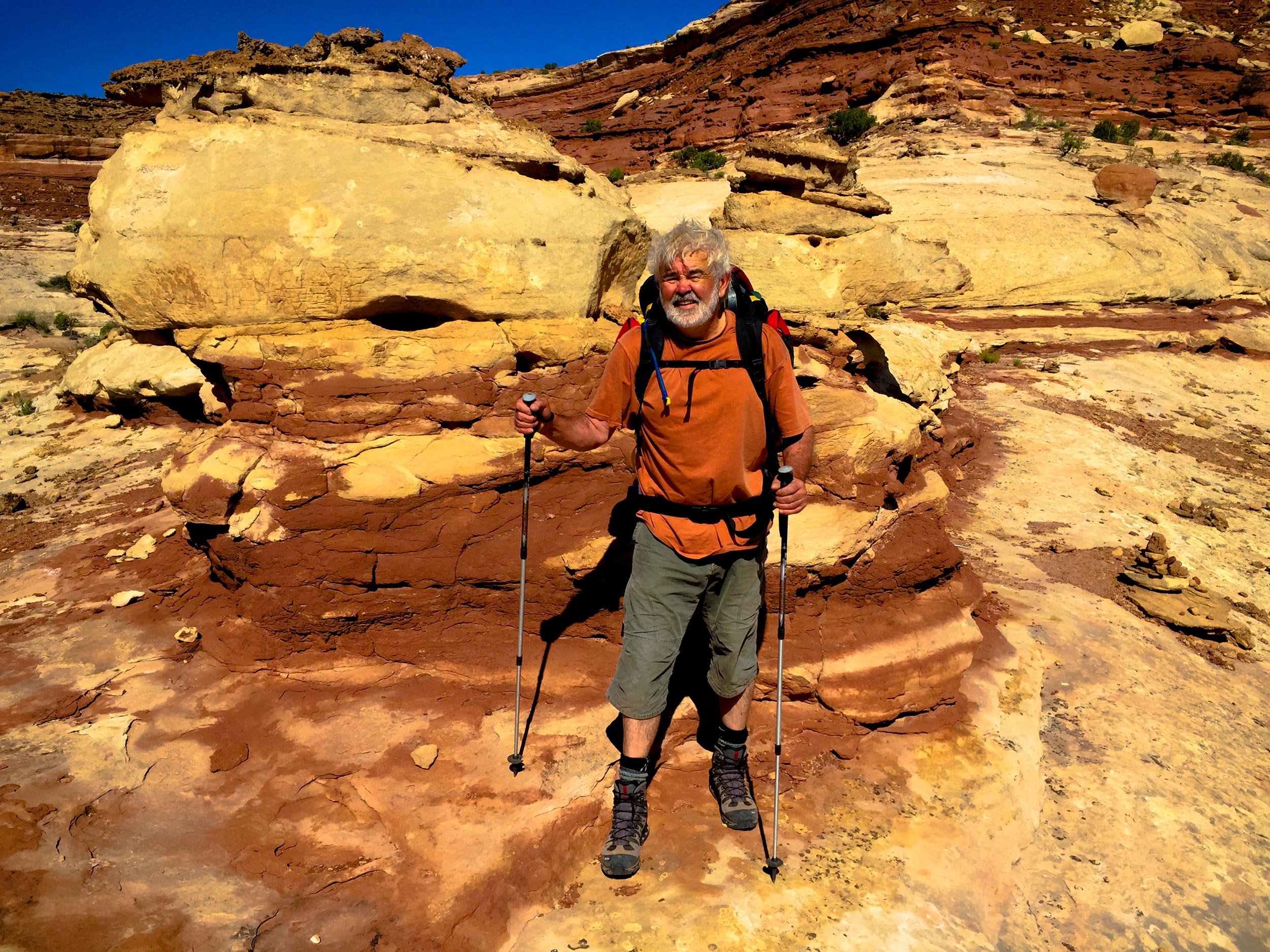 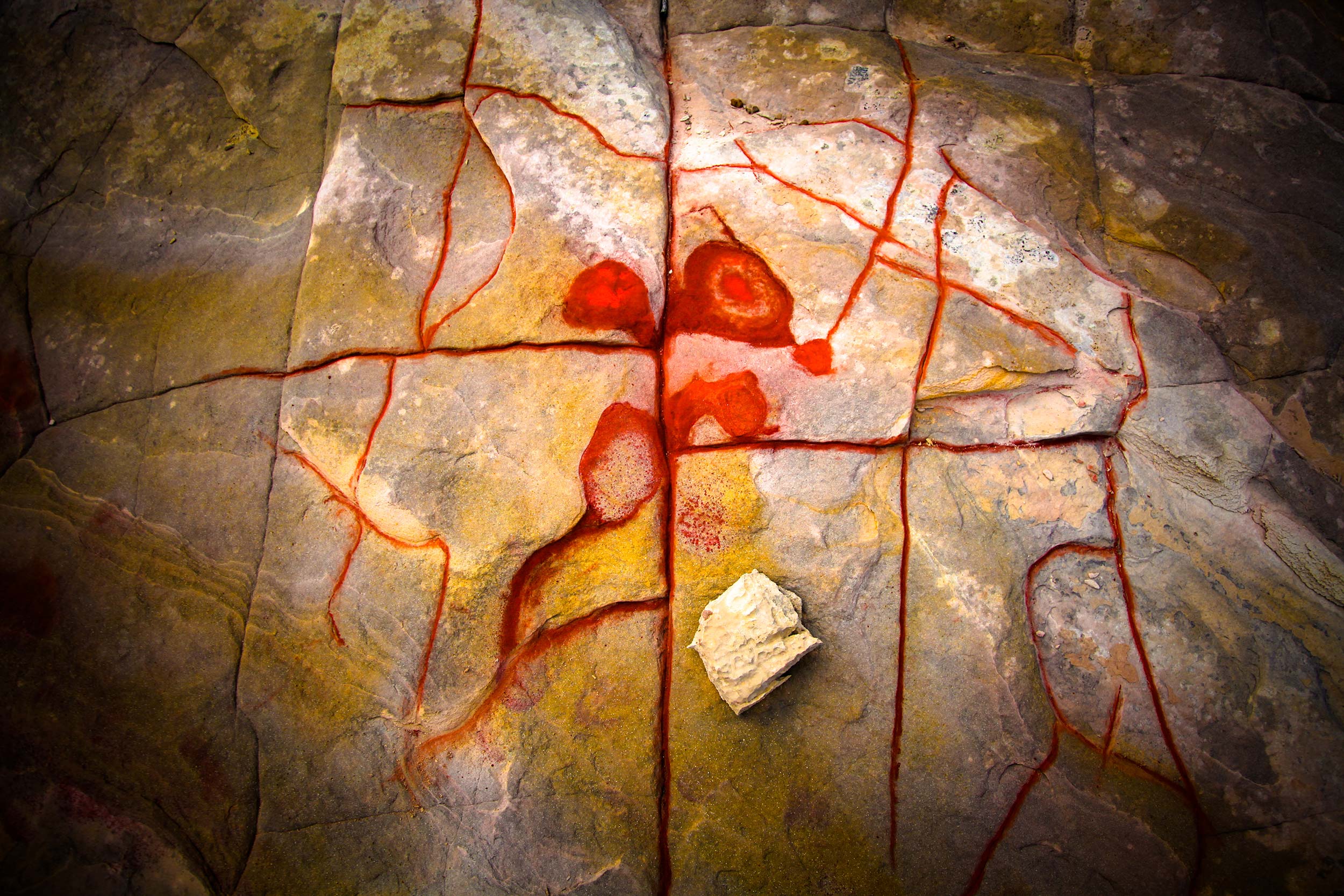 Images from Jonathan Harris’ project A Silent Place are on view at the ICP Museum from May 29 to June 4, 2018 as part of ICP’s series Projected.
Interview
Wesley Verhoeve
© Jonathan Harris

Wesley Verhoeve: You created the imagery that became A Silent Place in Utah while traveling with professor Larry Clarkson. Can you tell us how that meeting came about?

Jonathan Harris: I met Larry while I was teaching a workshop at Weber State College in Ogden, Utah. I felt immediately drawn to him, and we quickly found a natural friendship based on common curiosities. Larry mentioned he often takes solitary expeditions into the Utah wilderness, searching for pictographs and petroglyphs, and using various shamanic practices in their presence, to try to elicit the mind states their creators might have inhabited, way back when. I asked Larry if I could join him on one of his journeys, and he agreed.

WV: During your travels in Utah you got to see ancient pictographs and petroglyphs. You mention that you were “struck by the deep silence of the ancient images.” Can you tell us a bit more about how that observation influenced your creative process afterwards?

JH: The ancient pictographs and petroglyphs are inexplicable. There they are on the rocks in very remote places, but they come with no instruction manual, no verifiable interpretation of their meaning. Their presence is mysterious, and their symbolism is hard to guess at, as it comes from another time and culture, presumably with its own state of consciousness, quite different from our own. The images stare at you with a deep sense of silence. They are not saying anything. You can imagine this or that, but those imaginings are just in your mind, and not in the images. In this way, they are less like signs and more like mirrors.

WV: Did you have a certain result in mind when you started drawing on rocks? Both creatively and in terms of what you might use them for.

JH: I was interested in making drawings that responded to natural shapes, marks, and colors in the rocks, as a way of revealing their “inner potential.” I wanted to collaborate with the rocks, to work with what was already there—accentuating, enhancing, calling attention, but not so much altering. In this regard, some of the drawings are more successful than others. I consider the best ones to be those where it’s unclear which marks were made by me and which were made by nature. I wasn’t always able to do this. I made 111 images in all, but only 60 of them are included in the final project. The others didn’t seem to have that special quality that I was looking for.

WV: You mention that you had been sitting on the photographs of the drawings for almost three years. Can you walk us through your thinking on their eventual presentation as time went by? Was there a point at which you thought that maybe they would not find their way to your audience?

JH: Yes, for a long time I was stumped about what to do with these images. My original plan was to make a project called “A(s)sign Language,” where viewers could record their own interpretations of the images, using a voice recording application, or a database of text. I thought it would be interesting to create a kind of “collective oracle,” combining the images I made with the interpretations of thousands of strangers. I hemmed and hawed for three years about that idea. It felt conceptually solid, but something about it didn’t feel right. Maybe it was a little too clever, too tricky. It didn’t seem to honor the silence of the places where the images were made. So I just sat on the images, waiting, not deciding anything.

Finally, one night this winter I was lying in bed and all of a sudden, the simple idea appeared of letting the images speak for themselves. Something shifted in me, and it seemed ok to present them in a very straightforward way, without any other conceptual layers. I got out of bed and spent a few hours working into the early morning. Three days later, the website was complete.

WV: In your description of the project you speak on our collective relationship with the Internet, and how the way we speak about it has moved from techno-utopian optimism to skeptical talk of fake news, addiction, and a resulting confusing cacophony of information. As an artist who has worked with and presented through the Internet, how has this change affected your creation process and the way in which you choose to connect to your audience?

JH: Fifteen years ago, I was among the Internet’s most earnest evangelists. Like many others, I saw tremendous hope for this new frontier that was opening up, welcoming a large percentage of humanity.

In those days, I was often in the position of trying to convince people that the Internet was actually a very “human” place, as all of that “data” was put there by people. Early projects like We Feel Fine (a search engine for human emotions) exemplified the exuberance I felt—“look how beautiful our species is,” these projects seemed to proclaim, “and look how the Internet finally allows us to see it.”

I was obsessed with the idea that the Internet was helping humanity evolve into a kind of planetary “meta-organism,” in which we all play a part, like cells in a body. I was interested in making portraits of that emerging meta-organism—what does it feel, think, hope, dream, and believe?

In a more practical sense, those early days were a wonderful time to be creating for the Internet, as there was a fairly standard viewing experience (i.e. a web browser on a desktop computer) for which you could design.

In time, with the rise of smartphones and the decline of Java applets and Flash, what used to be a single medium (the canonical “website”), became fragmented into many kinds of formats and devices, making it more difficult to design a single experience for everyone to encounter.

The frontier spirit that defined those early days was overtaken by a dramatic consolidation around a small handful of ubiquitous platforms (Facebook, Tumblr, Twitter, Instagram, etc.) which gobbled up much of the Internet’s experimental diversity, funneling people through increasingly controlled and homogenous corporate experiences, motivated by the harvesting and monetizing of human attention. Which, in turn, gave way to fake news, filter bubbles, privacy breaches, and the generally addictive cacophony that constitutes the Internet today.

For me, all of this has ended up leading me back into life—the primary medium that all of us experience, beyond the frames of computer screens, cell phones, movies, and books.

Especially with the rise of virtual reality, it seems clear that these bodies we inhabit are the ultimate virtual reality machines, and that this world in which we live is the ultimate world—more vast and complex, more beautiful and subtle, more elegant and profound than any virtual world I believe we will ever create.

In alchemy there is the notion that medicine can become poison and poison can become medicine, and that this is largely a question of dose.

When I look at something like “fake news,” I wonder, “What is the medicine here?”  And I think, well, maybe it is showing us the malleability of reality —that there is no objective truth. The experience of truth by consensus arises from collective belief. But reality is not something you can point at. It is something we co-create together, something we are inside of, that’s all around us. In this sense, it is like those ancient pictographs and petroglyphs—the more you stare at them, trying to find their meaning, the more they stare back at you, becoming a mirror. The truth they reveal is a personal truth, pointing you back into life.

A Silent Place is on view at the ICP Museum from May 29 to June 4, 2018 as part of ICP’s Projected series. During the day, the work is presented on monitors inside the ICP Museum and during evening hours, images are literally “projected” onto the windows of the ICP Museum; they can be viewed from the sidewalk outside the Museum and are most visible after sunset.