After the Fact: A Symposium

The symposium explores how we process personal and political information, how we view, and contextualize art, and how the worlds of both fact and fiction inform oureveryday realities and our senses of self. Natural disasters, encounters with works of art, acts of political resistance, the genesis of authentic love, all are points of no return. What happens when we feel, live, and experience the intensities that emerge, as if out of nowhere, as miraculous forces? How do we relate to contingencies, which change the way we perceive our selves and engage in our world?

Jean Marie Casbarian
Jean Marie Casbarian was born to an Armenian father and a German mother on a military weapons testing ground in Aberdeen, Maryland. Her nomadic lifestyle has led her through various lives in the U.S. including Chicago, California, Colorado, Massachusetts and New York. She received her MFA from Milton Avery School of Art at Bard College in New York where she focused on interdisciplinary installation practices and incorporates photography, film and video, sound, sculpture, and performance into her artworks. Along with exhibiting her works throughout the United States, Europe, Central America, and Asia, she has received a number of awards and artist residencies including a Lower Manhattan Cultural Council Process Space Grant, a Research/Studio Art Associate with Five-Colleges, Inc., Louis Comfort Tiffany Foundation nomination, The LaNapoule Foundation Grant in LaNapoule, France, the Chicago Artist's Assistance Project Grant, and an Associateship with The Rocky Mountain Women's Institute. As an educator, Casbarian is core faculty with the ICP-Bard MFA program and the General Studies Program at the International Center of Photography. She also teaches and advises graduate students at Transart Institute, a low-residency MFA program based in Berlin and New York City. She has taught in the film and photography departments at Hampshire College, School of the Art Institute of Chicago, and the University of Colorado. She currently lives and works in New York City.

T. Nikki Cesare Schotzko
Nikki Cesare Schotzko is Associate Professor at the University of Toronto's Centre for Drama, Theatre, and Performance Studies. She co-edited TDR's special issue "Caught Off-Garde: New Theatre Ensembles in NYC (mostly)" with Mariellen R. Sandford in 2010, and, with Isabel Stowell-Kaplan and Didier Morelli in 2015, a special issue of CTR entitled "Performing Products: When Acting Up Is Selling Out." She has presented talks and papers internationally, and, as an occasional dramaturge, collaborated on productions in New York, Toronto, Chicago, and Morelia, Mexico. In fall 2012, Professor Cesare Schotzko organized the The Future of Cage: Credo in celebration of the centenary of composer John Cage, which brought together an international and interdisciplinary array of scholars and artists including Allen S. Weiss and Pauline Oliveros, and culminated in a new performance of Cage's 1976 Lecture on the Weather. Her first book, Learning How to Fall: Art and Culture after September 11, engages the skewed relationship between 21st-century media technologies, perception, and pop culture, and her current research explores what she considers to be a trending nihilism, or #nihilism, within literal and metaphoric climate change.

Milagros de la Torre
Milagros de la Torre has been working with the photographic medium since 1991. She studied Communications Sciences at the University of Lima and received a B.A. (Hons) in Photographic Arts from the London College of Printing. Her first solo exhibition, curated by Robert Delpire, was presented at the Palais de Tokyo, Paris. She received the Rockefeller Foundation Artist Grant and was awarded the Romeo Martinez Photography Prize and the Young Iberoamerican Creators Prize. In 2003, her artist book Trouble de la Vue was published by Toluca Editions, Paris.  De la Torre received the Guggenheim Fellowship in Creative Arts, Photography, 2011 and the Dora Maar Fellowship from The Brown Foundation, 2014. Her work has been exhibited broadly and is part of permanent museum collections in America and Europe. In 2012, the Americas Society, N.Y. presented ‘Observed’, a solo show curated by Edward J. Sullivan and the Museo de Arte de Lima (MALI) honored her with a mid-career retrospective exhibition. Born in Lima, Peru. De la Torre lives and works in New York.

Nona Faustine
Photographer Nona Faustine was born and raised in Brooklyn, New York. She is a graduate of The School of Visual Arts and International Center of Photography at Bard College MFA program in 2013. Her series White Shoes are nude self-portraits taken in and around the places associated with the 250 year history of slavery in New York City. Recently her work has received worldwide press coverage online and print in publications such as the Huffington Post, Hyperallergic, Elle.com, NBCNews, The Village Voice, Beautiful Decay, ArtNet, Brooklyn Magazine, Mic.com, Greybook Magazine, Dodge & Burn Blog, Lenscratch Fine Art Photography Daily, PDN, and a host of national and international publications. Writer/Curator Charlotte Cotton selected Faustine's work as a 2014 Honorable Mention for Baxter St. Camera Club of New York Competition. Since graduating her work has been steadily exhibited, most notably this fall in The Studio Museum of Harlem's Constellation exhibition. For Colored Girls, at the Schomburg Center for Black Research in Harlem in 2014, Respond at Smack Mellon, Take Ten at ICP, Feminism at Chicago's Woman Made Gallery, The Future is Forever at ICP MANA Contemporary Art Center, all in 2015. She will have her first of two solo shows at Smack Mellon in January 2016 and Invisible Dog Art Center in October 2016.

Alex Fialho
Alex Fialho, Programs Manager at Visual AIDS, has facilitated projects and conversations around both the history and immediacy of the HIV/AIDS epidemic, utilizing art to maintain HIV/AIDS visibility, consider its legacy, and galvanize contemporary response. He has presented his research on the art of Glenn Ligon and Keith Haring at the College Art Association and NYU Fales Library. He also curates exhibitions for Lower Manhattan Cultural Council as Research and Curatorial Associate, and is a frequent contributor to Artforum.com and Artforum International Magazine.

Gordon Hall
Gordon Hall is an artist based in New York. Hall has exhibited and performed at SculptureCenter, The Kitchen, Movement Research, EMPAC, The Brooklyn Museum, The Museum of Contemporary Art Chicago, Whitney Museum of American Art, Night Club in Chicago, Kent Fine Art, Foxy Production, The Hessel Museum at Bard College, White Columns, and at Chapter NY, among others. Hall has also organized programs at MoMA PS1, Recess, The Shandaken Project, Alderman Exhibitions, and at the Whitney Museum of American Art, producing a series of lectures and seminars in conjunction with the 2014 Whitney Biennial. Hall's writing and interviews have been featured in a variety of publications including V Magazine, Randy, Bomb, Title Magazine, What About Power? Inquiries Into Contemporary Sculpture (published by Sculpture Center) and in Theorizing Visual Studies (Routledge, 2012). Hall was awarded a Triangle Arts Foundation Residency in 2015, the LMCC Workspace Residency for 2013–14, attended the Skowhegan School of Painting and Sculpture in 2013, and the Fire Island Artist Residency in 2012. Hall holds an MFA and an MA in Visual and Critical Studies from the School of the Art Institute of Chicago.

Katherine Hubbard
Katherine Hubbard is an interdisciplinary artist living in New York who works at the intersection of photography, performance, and writing. A new series of landscape photographs, bygone from here (2015), is currently included in Greater New York at MoMA PS1. Her most recent solo exhibition, four shoulders and thirty five percent everything else, was presented at Capricious 88 (now Company Gallery), New York in 2014. Forthcoming in 2016, Hubbard will be an artist in residence at the Chinati Foundation in Marfa, Texas. Hubbard's work has also been exhibited at Recess, New York; The Elizabeth Foundation for the Arts, New York; the Brooklyn Museum, New York; the Judd Foundation, New York; Vox Populi, Pennsylvania; Higher Pictures, New York; Renseriet, Stockholm, Sweden; Murray Guy, New York; Marlborough Gallery, New York; and Museum of Arts and Design, New York. Hubbard holds an MFA from the Milton Avery Graduate School of the Arts at Bard College, and holds part-time teaching positions at School of the Art Institute of Chicago, Parsons School of Design, and the International Center of Photography at Bard.

Martha Joseph
Martha Joseph is a Curatorial Assistant in the Department of Media and Performance Art at The Museum of Modern Art, where she has worked on such exhibitions, commissions, and performances such as Transmissions: Art in Eastern Europe and Latin America, 1960–1980; Steffani Jemison: Promise Machine; and Projects 101: Rabih Mroué. Before joining MoMA, she worked at The Whitney Museum where she assisted on the 2014 Biennial and helped produce such performances as Mortal Kombat featuring Ariana Reines and Jim Fletcher. Previously, she worked in the curatorial department of The Massachusetts Museum of Contemporary Art and curated the group exhibition Love to Love You. She received her Masters degree in the History of Art from Williams College and Bachelors degrees in Art History and Vocal Performance from Oberlin College and Conservatory.

Steffani Jemison
Steffani Jemison was born in Berkeley, California, and is currently based in Brooklyn, New York. She holds an MFA from the School of the Art Institute of Chicago (2009) and a BA in Comparative Literature from Columbia University (2003). Jemison's work has been exhibited nationally and internationally; solo exhibitions include LAXART, the RISD Museum, the Bindery Projects, and Real Art Ways; collaborative exhibitions include the New Museum and the Royal Danish Academy of Fine Art; and group exhibitions include the Brooklyn Museum; the Drawing Center; the Studio Museum in Harlem; Laurel Gitlen; Team Gallery; and other venues. Her publishing project, Future Plan and Program, commissions literary work by artists of color and has published books by Martine Syms, Jibade-Khalil Huffman, and Harold Mendez, among others. Jemison has participated in artist residencies at Smack Mellon; the International Studio and Curatorial Program; Project Row Houses; the Core Program at the Museum of Fine Arts Houston; the Skowhegan School of Painting and Sculpture; and the Studio Museum in Harlem, among others. Jemison was a 2013 Tiffany Foundation Biennial Awardee and a 2014 Art Matters Grantee. In 2015, she presented her new multi-part commission Promise Machine at the Museum of Modern Art. Jemison is currently an artist-in-residence in the Sharpe-Walentas Space Program. She teaches at Parsons The New School for Design, the Cooper Union, and the School of the Art Institute of Chicago.

Martha Wilson
Martha Wilson is a pioneering feminist artist and gallery director, who over the past four decades created innovative photographic and video works that explore her female subjectivity. She has been described by The New York Times critic Holland Cotter as one of "the half-dozen most important people for art in downtown Manhattan in the 1970s." In 1976 she founded Franklin Furnace, an artist-run space that champions the exploration, promotion and preservation of artist books, temporary installation, performance art, as well as online works. She is represented by P.P.O.W Gallery in New York. Wilson received an Honorary Doctor of Fine Arts degree from the Nova Scotia College of Art and Design University in 2013. She has received fellowships for performance art from the National Endowment for the Arts and the New York Foundation for the Arts; Bessie and Obie awards for commitment to artists' freedom of expression; a Yoko Ono Lennon Courage Award for the Arts; a Richard Massey Foundation-White Box Arts and Humanities Award; a Lifetime Achievement Award from Women's Caucus for Art; and the Audrey Irmas Award for Curatorial Excellence from the Center for Curatorial Studies, Bard College.

After the symposium, join the ICP-Bard MFA students at their studios at 24-20 Jackson Avenue in Long Island City to view their current work. 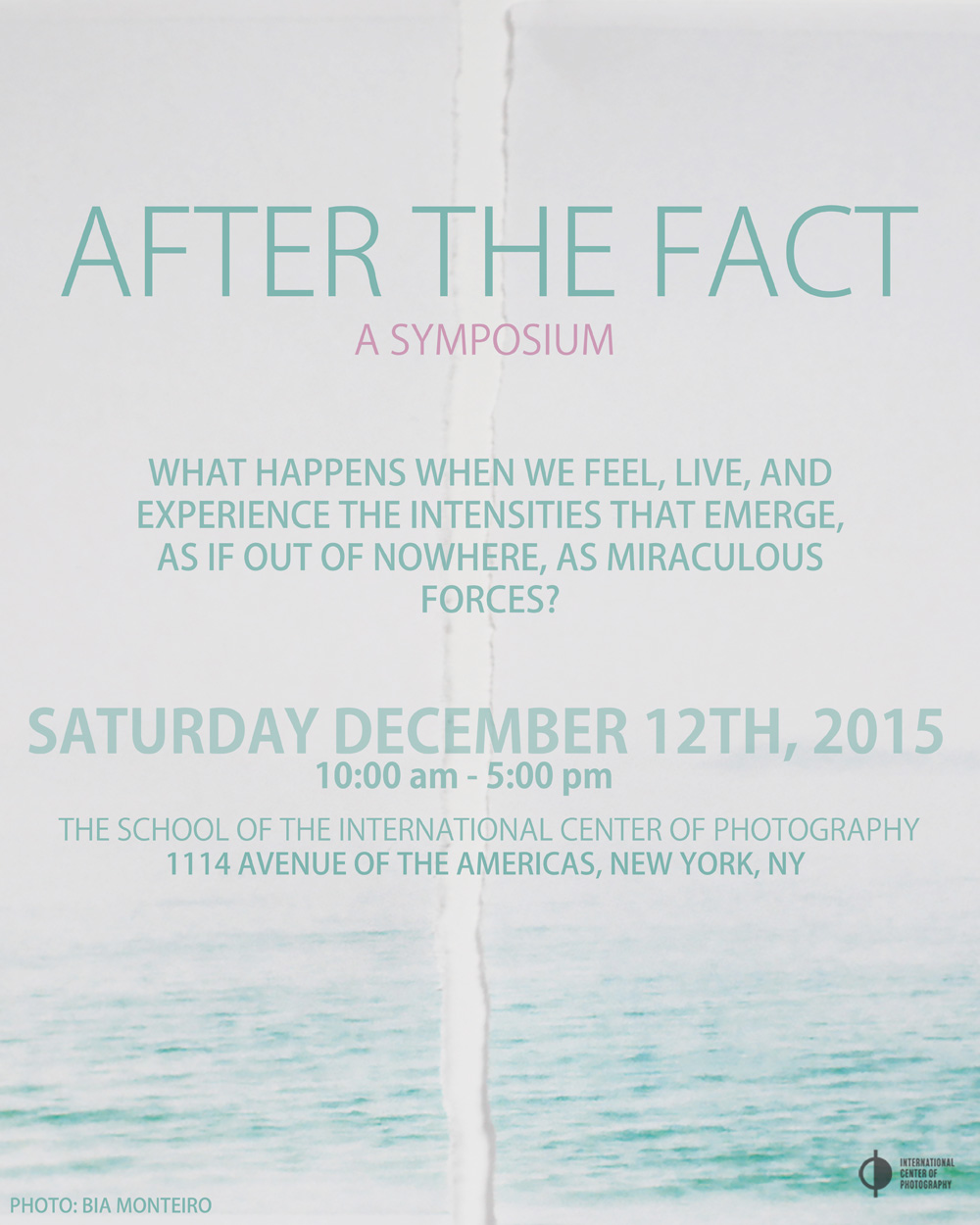 Related Items
Event ICP-Bard MFA Open Studios 2015 Exhibition ICP-Bard MFA: 2014 Group Thesis Exhibition Interview Nayland Blake Wants You To Think Media Archive Moyra Davey Media Archive ICP-Bard MFA 2011 Symposium
This website stores cookies on your computer. These cookies are used to collect information about how you interact with our website and allow us to remember you. We use this information in order to improve and customize your browsing experience and for analytics and metrics about our visitors both on this website and other media. To find out more about the cookies we use, see our Privacy Policy.
I Accept I Decline