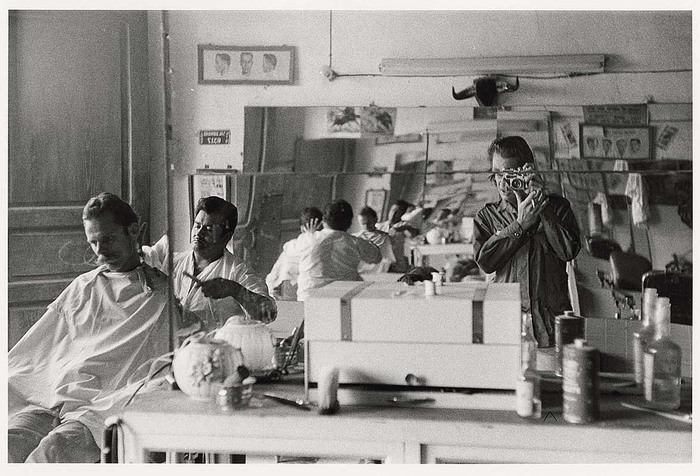 Larry Clark, born in Tulsa, worked in his family's commercial photographic portrait business before studying photography with Walter Sheffer at the Layton School of Art in Milwaukee, Wisconsin from 1961 to 1963. He served in the military during the Vietnam War and has been a freelance photographer based in New York since 1966. During the 1960s, Clark documented the culture of drug use and illicit activity of his friends in Tulsa, and his photographs from those years were published as Tulsa (1971). Considered shocking for its graphic portrayal of the intimate details of its subjects' risky lives, the book launched Clark's career. After Tulsa, he produced Teenage Lust (1983), a series of photographs depicting adolescent sexuality, Larry Clark (1992), and The Perfect Childhood (1993). His work has been included in group and solo exhibitions since the early 1970s, and he was the recipient of a National Endowment for the Arts Photographers' Fellowship in 1973 and a Creative Arts Public Service photographers' grant in 1980. Clark has also produced films; Kids (1994), based on his experiences with New York City teenagers and their culture of drugs, alcohol, and sex, and Another Day in Paradise (1999).
Larry Clark's photographs in Tulsa are unflinching portrayals of difficult and often unsightly circumstances viewed through a participant's eyes. Their first hand intensity, recollects the work of Danny Lyon and Bruce Davidson, but Clark's raw voyeurism and insistent exposure of detail results in a somberness that differentiates his work from that of others in the early 1970s. His recent photography addresses similar subjects, but with the distance of an observer, and a more prominent formal sensibility.
Lisa Hostetler
Handy et al. Reflections in a Glass Eye: Works from the International Center of Photography Collection, New York: Bulfinch Press in association with the International Center of Photography, 1999, pp. 211-212.
Archived Items
Sort by
No results found.
Try another search or browse ICP.
View More
This website stores cookies on your computer. These cookies are used to collect information about how you interact with our website and allow us to remember you. We use this information in order to improve and customize your browsing experience and for analytics and metrics about our visitors both on this website and other media. To find out more about the cookies we use, see our Privacy Policy.
I Accept I Decline