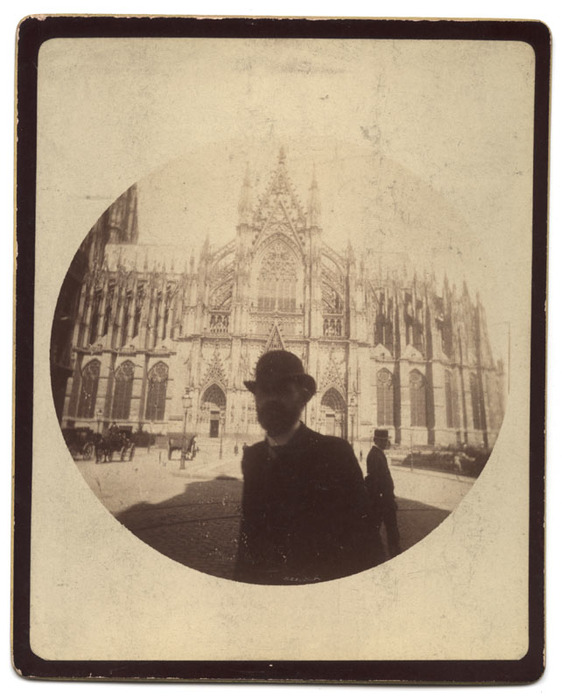 While we have little information on James Walker, even in his anonymity he represents the spirit of upward mobility during America’s “gilded age.” His camera was the #2 Kodak making a circular negative 3 1/2 inches in diameter. Introduced in 1889, a year after the first Kodak, this improved camera not only offered an image 1 inch larger but also could be loaded with sufficient film for up to 150 exposures. Like the first Kodak the camera was sent to the factory for processing and reloaded with a fresh roll of film.
Many of the Walker Kodak prints were processed in England. He traveled throughout Europe in the spirit of the Grand Tour. His photographs from England, through Germany and to Italy are an early definition of the “snapshot.” His playful, casual photographs might often take advantage of an odd resting place to support the camera. In addition to obtaining refreshingly informal images of very formal architecture and street scenes there are one or two portraits that might just be an early example of a “selfie” (unfortunately, there is no way to confirm that).
The James Walker collection of Kodak #2 images includes over 430 prints and negatives. The collection was acquired in the year 2000 with funds provided by the ICP Acquisitions Committee.