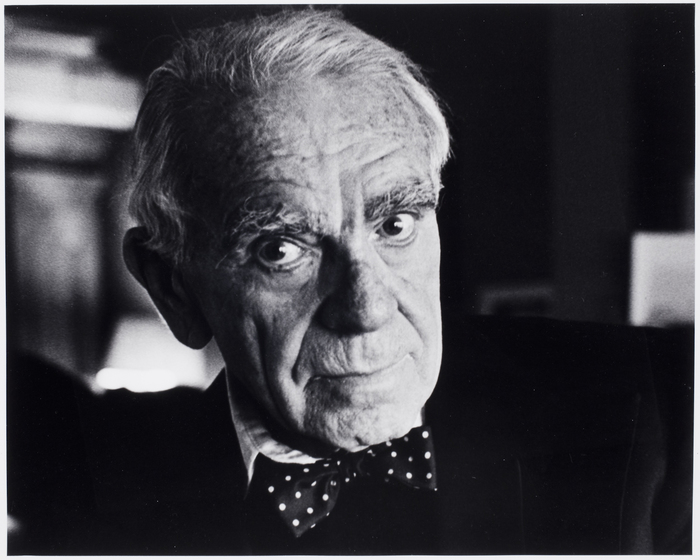 Born Horst Paul Albert Bohrmann in Weissenfels-an-der-Salle, Horst P. Horst studied architecture in Hamburg and apprenticed in Le Corbusier's studio in Paris in 1930. While there, he gave up architecture for photography, which he had learned from George Hoyningen-Huene, a fashion photographer working for Vogue. In 1932 he went to work for Vogue in New York, but differences of opinion with the publisher caused him to return to Europe. In 1935, however, Condé Nast invited Horst back, and when Hoyningen-Huene left Vogue for Harper's Bazaar in 1935, Horst took over his job as chief photographer for French Vogue. At the outbreak of World War II, he immigrated to the United States, and he worked as a photographer for American Vogue until the early 1980s, with an interruption for Army service from 1942-1945. By the 1950s, Horst's trademark elegance was considered outdated in editorial fashion photography, and he did more advertising work. Diana Vreeland, editor in chief at Vogue, encouraged him to photograph international high society; he spent most of his time between 1961 and 1975 traveling and photographing for Vogue, Vanity Fair, and House & Garden. He published several books of his photographs, including Photographs of a Decade (1945), Patterns from Nature (1946) and Salute to the Thirties, with George Hoyningen-Huene (1971).
Although heavily influenced by Hoyningen-Huene in his early work, Horst quickly developed an original style through innovative lighting that enhanced his subjects' best features. His expertise contributed to the success of his architectural and life-style photographs, which established a new standard for the field in the 1960s. The resurgence of luxury in fashion photograph in the late 1970s and early 1980s renewed interest in Horst's pictures from the 1930s. Several exhibitions of his work have been mounted, including two retrospectives at ICP, one of which coincided with his receiving the ICP Master of Photography Infinity Award in 1996.
Lisa Hostetler
Handy et al. Reflections in a Glass Eye: Works from the International Center of Photography Collection, New York: Bulfinch Press in association with the International Center of Photography, 1999, p. 218.