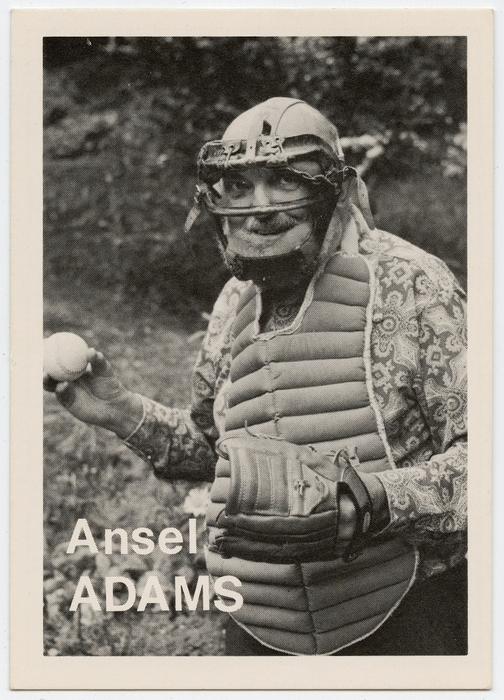 The influence of Ansel Adams on photography is immeasurable, and his long career as photographer, teacher, conservationist, and writer is legendary. His visionary belief in the redemptive beauty of wilderness was expressed in grand images that have popularized art photography among the American public. Adams was born in San Francisco, and trained as a musician; his interest in photography was catalyzed when he met Paul Strand in 1930. In 1932, with Imogen Cunningham, Edward Weston, and others, Adams founded the group f/64, which promoted use of large-format view cameras, small lens apertures, and contact printing. Adams developed this purist approach into the zone system, a controlled method of determining exposure and development. His deep respect for the grandeur of landscape motivated a lifelong involvement in conservation, which he advocated through photographic books and active membership in the Sierra Club.
In 1933, Adams met Alfred Stieglitz, who gave him a solo exhibition at his gallery An American Place in 1936; after this meeting, Adams opened his own gallery in San Francisco. He moved to Yosemite Valley in 1937 and lived there until 1962, teaching annual photography workshops from 1955 through 1984; in 1962, he moved to Carmel, California, where he spent the rest of his life. Adams assisted Beaumont Newhall and David McAlpin in forming the Department of Photography (the first in the country) at the Museum of Modern Art in 1940, and he founded the Department of Photography at the California School of Fine Arts in 1946. In 1967 he established the Friends of Photography in San Francisco. Adams received Guggenheim grants in 1946, 1948, and 1958. He published dozens of picture and technical books.
Lisa Soccio
Handy et al. Reflections in a Glass Eye: Works from the International Center of Photography Collection. New York: Bulfinch Press in association with the International Center of Photography, 1999, p. 206.
Archived Items
Sort by
No results found.
Try another search or browse ICP.
View More
This website stores cookies on your computer. These cookies are used to collect information about how you interact with our website and allow us to remember you. We use this information in order to improve and customize your browsing experience and for analytics and metrics about our visitors both on this website and other media. To find out more about the cookies we use, see our Privacy Policy.
I Accept I Decline