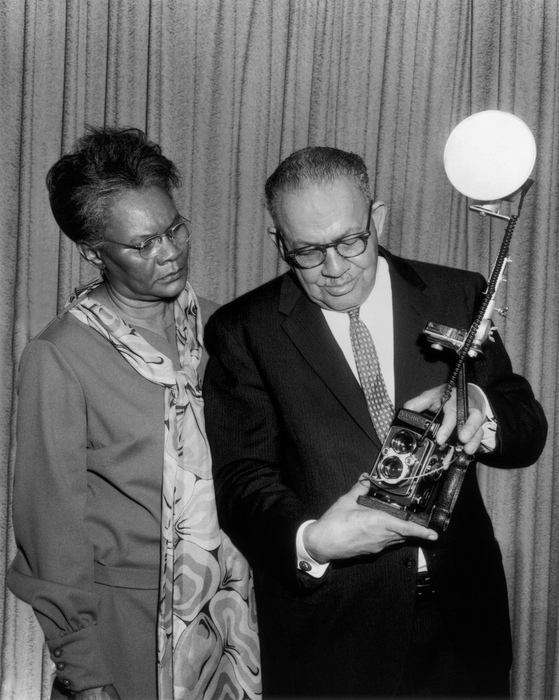 JORDAN (ALONZO) PHOTOGRAPH COLLECTION, CA. 1947–CA.1978
9 feet, photographic, printed.
1,500 gelatin silver prints
5,050 film negatives
Alonzo W. Jordan, photographer and barber, was born February 26, 1903 to Estella and Neeland Jordan in Sabine Pass, Texas. He moved to Jasper at age 2 and was raised by his grandparents and attended Jasper Negro School. In 1929 he entered the barbering profession and established a shop in Jasper.
Jordan studied photography under L. A. Simmons in Wiergate, Texas, and purchased his first professional camera in 1943. He simultaneously operated a photo studio and barbershop for forty-one years. Alonzo Jordan died in January 1984.
During the studio’s operation, Alonzo Jordan photographed almost every graduating class and school event at local Jasper schools and for many elementary and high schools in about a seventy-five mile radius. An active Prince Hall Mason, Jordan also documented black Freemasonry in East Texas for many years.
Jordan was married to Helen Armstrong Limbrick (b. 1912). Mrs. Jordan accompanied him on most shooting assignments outside Jasper and was responsible for the studio’s record-keeping and client information.
The Alonzo Jordan Photograph Collection is part of the Texas African American Photography (TAAP) Archive, given to the ICP in 2014 by Documentary Arts. The TAAP Archive of about 60,000 prints and negatives provides a broad overview of the work of community and vernacular photographers in urban and rural areas and spans the period from the late 1840s to the mid-1990s. Documentary Arts is a non-profit organization founded in 1985 by Alan Govenar to present new perspectives on historical issues and diverse cultures.