Journalists Under Fire | International Center of Photography
Join our mailing list
Stay updated on our latest news.
exhibition
But Still, It Turns: Recent Photography from the World
News
Engage with ICP from Anywhere
News
We Need Your Support
exhibition
#ICPConcerned: Global Images for Global Crisis
event
ICP Talks: Cheriss May on Documenting Democracy
event
ICP Talks: Mari Katayama on “Myself and the Others: Self-Portraits and this World”
Shop Become a Member Support ICP Subscribe Login
ICP's museum is closed for the installation of William Klein: YES; Photographs, Paintings, Films, 1948-2013.
View Details
View Details 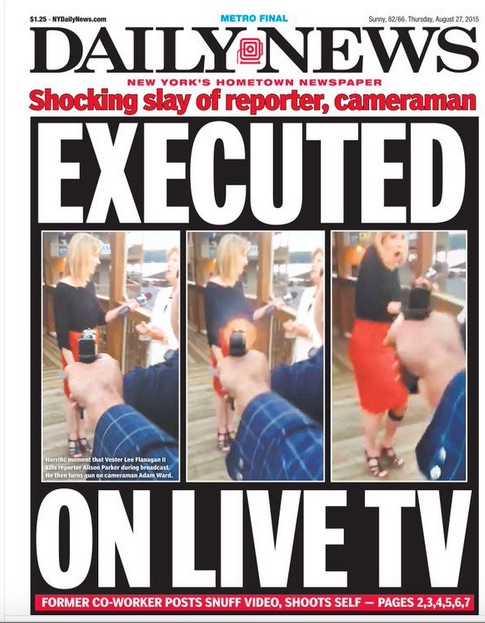 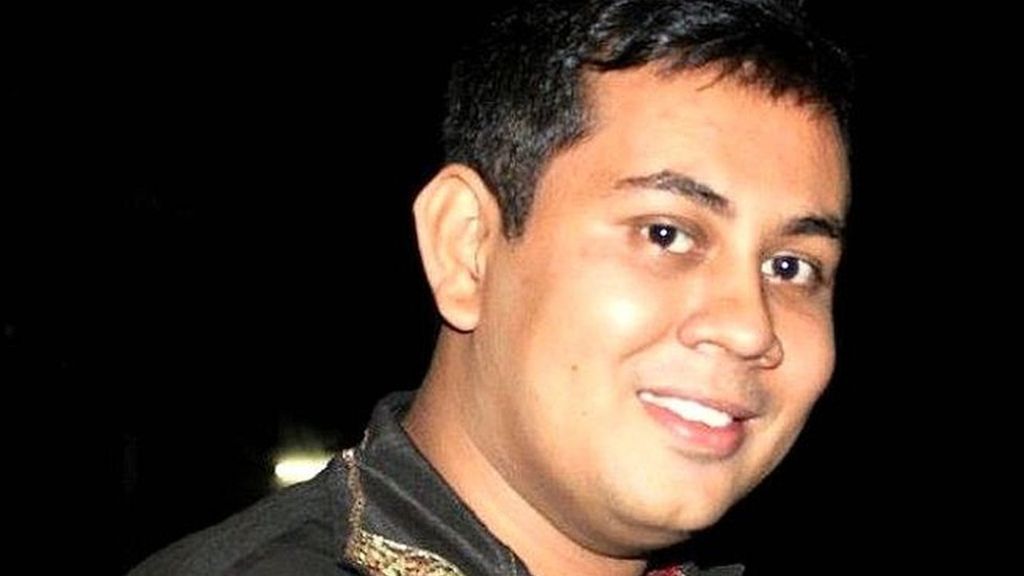 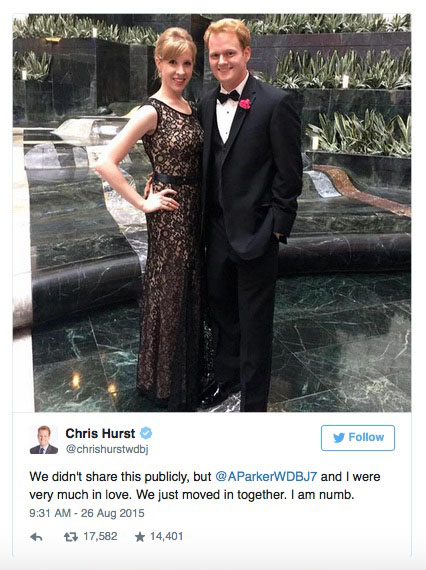 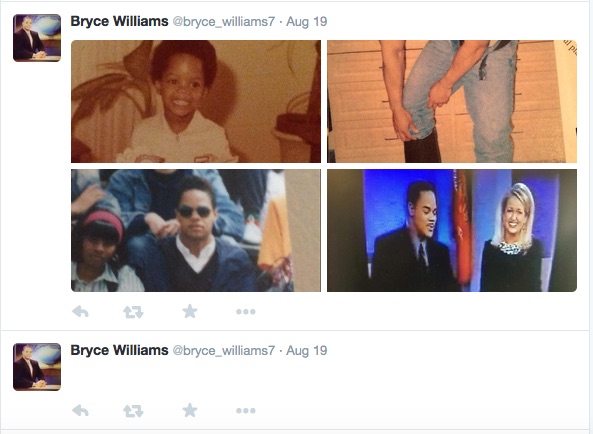 The shooting deaths on August 26 of two Virginia journalists, reporter Alison Parker and cameraman Adam Ward, suddenly called attention to the intersection of violence against journalists, workplace violence, and the multiple roles played by social media. Although the news cycle quickly moved on, the issues the crime raised remain pertinent, especially because of the controversy generated over the use of pictures, both moving and still. Two New York tabloids—the New York Post and the Daily News—stoked outrage by printing front-page stills captured from the killer's own cellphone footage, taken as he was shooting at the fleeing reporter. He posted the video footage to Twitter, where it incited protests when it began unreeling automatically without the user’s intervention because of an auto-play feature, and to Facebook, which also self-starts videos on mobile devices. Although both Twitter and Facebook quickly took down the accounts of the shooter, Vester Lee Flanagan II (aka Bryce Williams), the videos were already out there and views of them were multiplying.

Looking at those images and reading about the controversy made me wonder about how the killing of journalists are covered in other circumstances and in other parts of the world. I thought particularly of a story that had run in The New York Times a few weeks earlier about a blogger in Bangladesh. His name was Niladri Chaterjee, according to the Times, he wrote under the name Niloy Neel, and he had been hacked to death in his home. He had written critically about Islamic extremism and favorably about secular ideas such as women’s rights and the need for prosecution of war crimes committed by Islamists during Bangladesh’s 1971 war of independence. He often wrote for Mukto-Mona ("Free Thinkers"), a blog founded by the Bangladeshi-American Avijit Roy, who was also killed by attackers wielding machetes in February of this year. Both men had been on a list of 84 "atheist bloggers" targeted for death by extremist Islamic groups in 2013.

The brutal killing of Chaterjee made worldwide news, with Bangladeshi outlets providing extensive coverage that included often-graphic images. One lengthy television news report slowly panned the blood-puddled floor of the room where he was killed. Some American news outlets also covered his death, among them New York's Daily News. Online the paper posted a portrait of the blogger, a picture of his wife in the wake of the murder, and two still images of his body being removed from his apartment in a white, bloodstained body bag. In one photograph the evidence of the carnage is clearly visible on the floor. American media wouldn't usually feature such visceral evidence if the victim were an American.

In contrast to Alison Parker and Adam Ward, who had apparently been killed in workplace-related violence by a man who had been fired by local TV station that employed them, the Bangladeshi bloggers were targeted for explicitly expressed opinions. But the words and pictures about all the deaths surged through the same endless and seemingly undiscriminating stream. After the live, on-air shooting of Parker and Ward was captured by Ward’s own camera and broadcast on Roanoke's old-media "News 7 Mornin'" show, social media then provided the common channels through which individual lives and intersecting histories of the killer and his victims were told. Images of Parker and Ward in happy times proliferated across platforms in between the repeated unreeling of the live broadcast and the killer’s cellphone video.  A few hours after the murders, Parker's boyfriend, Chris Hurst, tweeted a portrait of the two of them in formal wear along with the news that they had just moved in together, that she loved her family, that he was numb. Flanagan had on August 19 and 20 posted to Twitter small galleries of pictures of himself across the years—as a happy child, a confidant, attractive young man, and an aging, unhappy man—eager to make research into his life easier for the news media that had rejected him when it reported his crimes.

After the murder of Chaterjee, a group that has been linked to Al Qaeda claimed his killing and warned of more to come in threatening posts, again, on Twitter and Facebook. Chaterjee had removed all his photographs from his Facebook page after he started getting multiple online threats, hoping perhaps to obscure his identity. It was too late to reestablish any semblance of privacy. When he reported the ominous warnings to the police, they suggested he leave the country. "My name is on the list," he wrote plaintively to his audience about one threatening article. "Save me."

Unlike Chaterjee, Parker and Ward had no advance warning of what was about to happen. But the killers all made specific preparations. Chaterjee's murderers wanted to silence a voice and cut off a flow of ideas, using social media to reiterate their savage message; they saw no need to release its own pictures of the crime. Flanagan's violence implicated the news media that had wronged him when he made a video that would be impossible for news outlets to resist and yet would invite bitter censure of its broadcast and reproduction.  By including footage of his hand tentatively lifting a gun, lowering it, and then pointing and firing, Flanagan forced viewers into a position of chilling intimacy and made their voyeurism intolerably obvious. That is one important reason for the protests over the video: viewers were forced to recognize themselves in the act of actively looking at unacceptable images.

Social media has given outlets to dissidents and young innocents just as it has to lone monsters and networked maniacs. In exchange for giving up one's privacy, anyone can broadcast anything about himself or herself in any chosen way. But it is impossible to reclaim privacy once it has been ceded. And despite the passage of laws about "the right to be forgotten," the endless flow of corporate reportage and social media insures that the battles over content and propriety in news coverage and individual revelation will continue. As each new outrage flashes before our eyes, we, as viewers, become more accustomed to the visual innovations of cruelty, intolerance, and slaughter.

Related Items
Perspective Public Faces: Photography as Social Media i... Perspective Conspiracy Theory 2.0 Perspective The Smartphone Camera and the Material Poli... Perspective Is Instagram Photography? Does it Matter? Interview Nathan Jurgenson and PJ Rey
This website stores cookies on your computer. These cookies are used to collect information about how you interact with our website and allow us to remember you. We use this information in order to improve and customize your browsing experience and for analytics and metrics about our visitors both on this website and other media. To find out more about the cookies we use, see our Privacy Policy.
I Accept I Decline