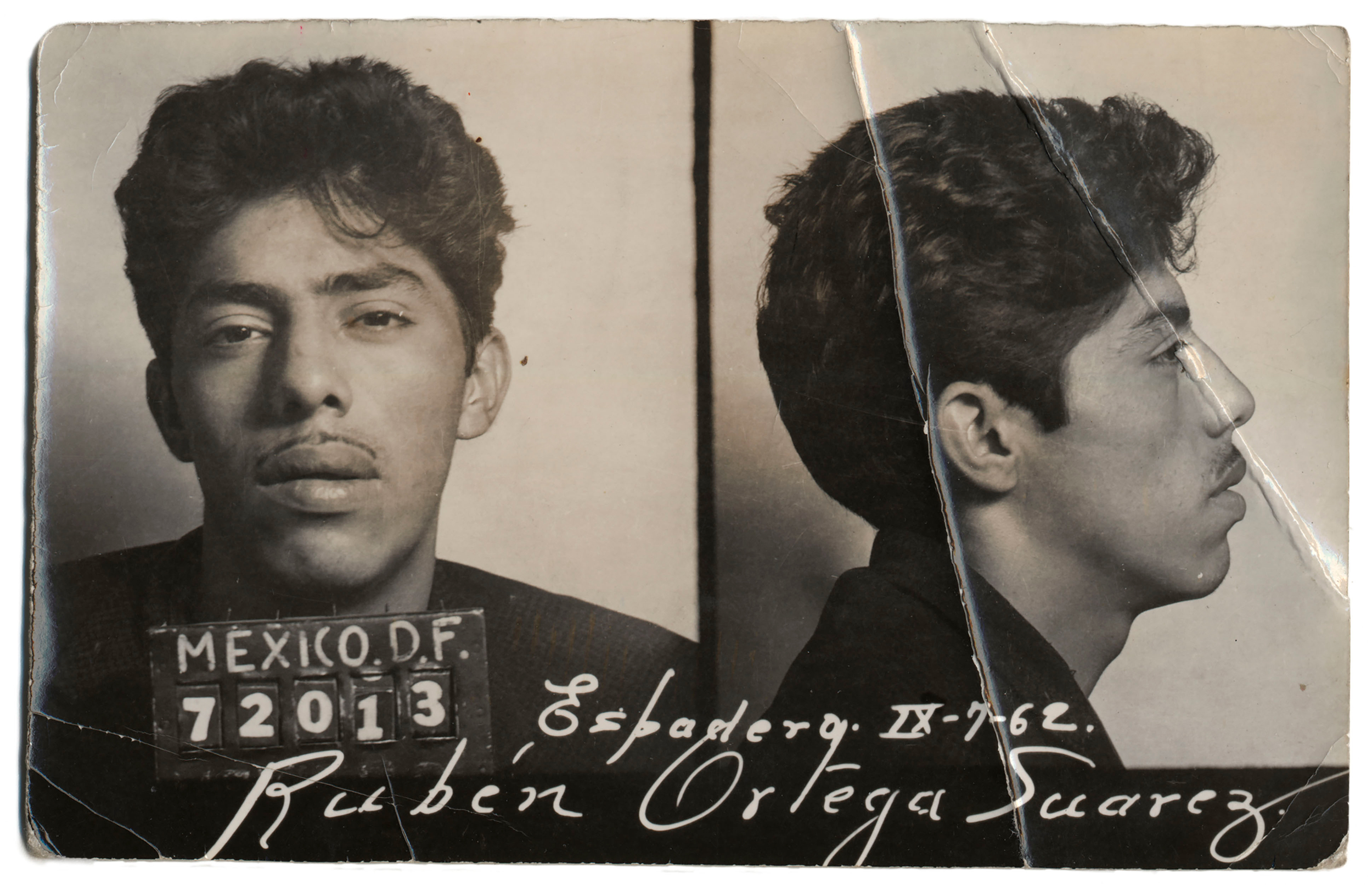 Pauline Vermare: Your fascinating collection of Mexican mug shots, published last year by GOST Books, is exhibited for the first time at the ICP Museum in Public, Private, Secret. Together, these beautiful photographs present us with a unique, thrilling, and moving social history of mid-twentieth-century Mexico. Can you tell us how you came across these prints, and how you ended up with such a unique collection?

Stefan Ruiz: I found the first few of these photographs at a stall in one of Mexico City’s flea markets in the summer of 2010. The vendors were selling the photos for a friend to whom I was introduced later that day. It turned out he had a lot more photos. We agreed to meet in one of the city’s parks. He brought two plastic bags of photos. I looked through them, negotiated, and bought the lot. We met up two more times over the next year and each time he had more photos that I ended up buying.

Although I never found out the specific source, the pictures clearly came from Mexico City’s police archives.

PV: What led you to publish this collection?

SR: As I was looking through the photos in the park, I thought that these could make a great book, but I wasn’t sure it would ever happen. As the year went by and I collected more of them, I became surer of the project: there were plenty of strong photos and there was enough variety to make a good book. I showed the photos to my friend Stuart Smith who was starting GOST Books and he suggested that we do the book together.

I have worked on many projects in Mexico and Latin America. I have also taught art in prison. I am obsessed with portraiture. This project brought all of those things together. Also, crime in Mexico at that time was at a high. The parallels between these old photos also have a modern relevance.

PV: A beautiful surprise, working with you on this show, was your incredible treasure trove of other mug shots—hundreds of them, from originals by Alphonse Bertillon to contemporary ones. When did you start collecting mug shots, and why? Are you more attracted by the aesthetics of the photographs, or by their social meaning and implications?

SR: I probably started collecting mug shots twenty years ago. I have always liked the fact that these are not voluntary portraits and that they are taken at what is probably quite a bad moment for the subject. The expressions feel very real. The portraiture is straightforward. It is a very private moment but they are a form of public record. Some of the subjects are murderers but some are only guilty of being on a street corner. Everyone is photographed the same.

PV: Also included in the ICP show is a striking diptych of a “pregnant” drug mule—one color portrait and one x-ray photograph. Can you tell us about it, and how you ended up photographing suspected drug mules at the Bogotá airport in 2013?

SR: I have been working with a writer on a project in Colombia for years now. The project is basically about crime and creativity—the extent to which creativity can be used for often a very negative end. This sometimes manifests itself in the drug trade, through such things as homemade weapons, guns, or landmines to the objects used to smuggle drugs—from sculptures to submarines.

On this day, we had access to photograph with the police at the Bogotá airport. Just as we were getting started we were called to the police headquarters. They had something to show us. We had no idea what it could be. When we got there they brought out a woman who was wearing a fake belly. And then they explained. She was a Canadian social worker who was trying to smuggle 2.25 kilos of cocaine stuffed into a false stomach.

PV: The x-ray portrait is particularly striking in the context of this show that deals with surveillance, privacy, and intimacy. What was your original intention when you started the project?

SR: I have a whole series of drug-mule x-rays. I am interested in the fact that the body can be used as a creative vessel to transport drugs. Mules swallow around a kilo of cocaine pellets. If a pellet breaks open while inside, it will kill the mule. The subjects are selected based on suspicion or tip-offs. The x-rays are another type of forced portraiture.

PV: What are you working on now?

SR: I am currently finishing a book of portraits on a subculture in Monterrey, Mexico, a group of young people who listen to a slowed-down version of cumbia, and who dress and style themselves in a very unique way. They have become known as “cholombianos.” The book should be published sometime next year.

This interview was originally published on publicprivatesecret.org on November 10, 2016.

Related Items
Interview Public, Private, Secret—John Houck with P... Exhibition Public, Private, Secret Event Book Signing: Anthony Hernandez by Anthony ... Event Walking in Place I: New Orleans by Mike Slack Interview Public, Private, Secret—Shelly Silver wit...
This website stores cookies on your computer. These cookies are used to collect information about how you interact with our website and allow us to remember you. We use this information in order to improve and customize your browsing experience and for analytics and metrics about our visitors both on this website and other media. To find out more about the cookies we use, see our Privacy Policy.
I Accept I Decline