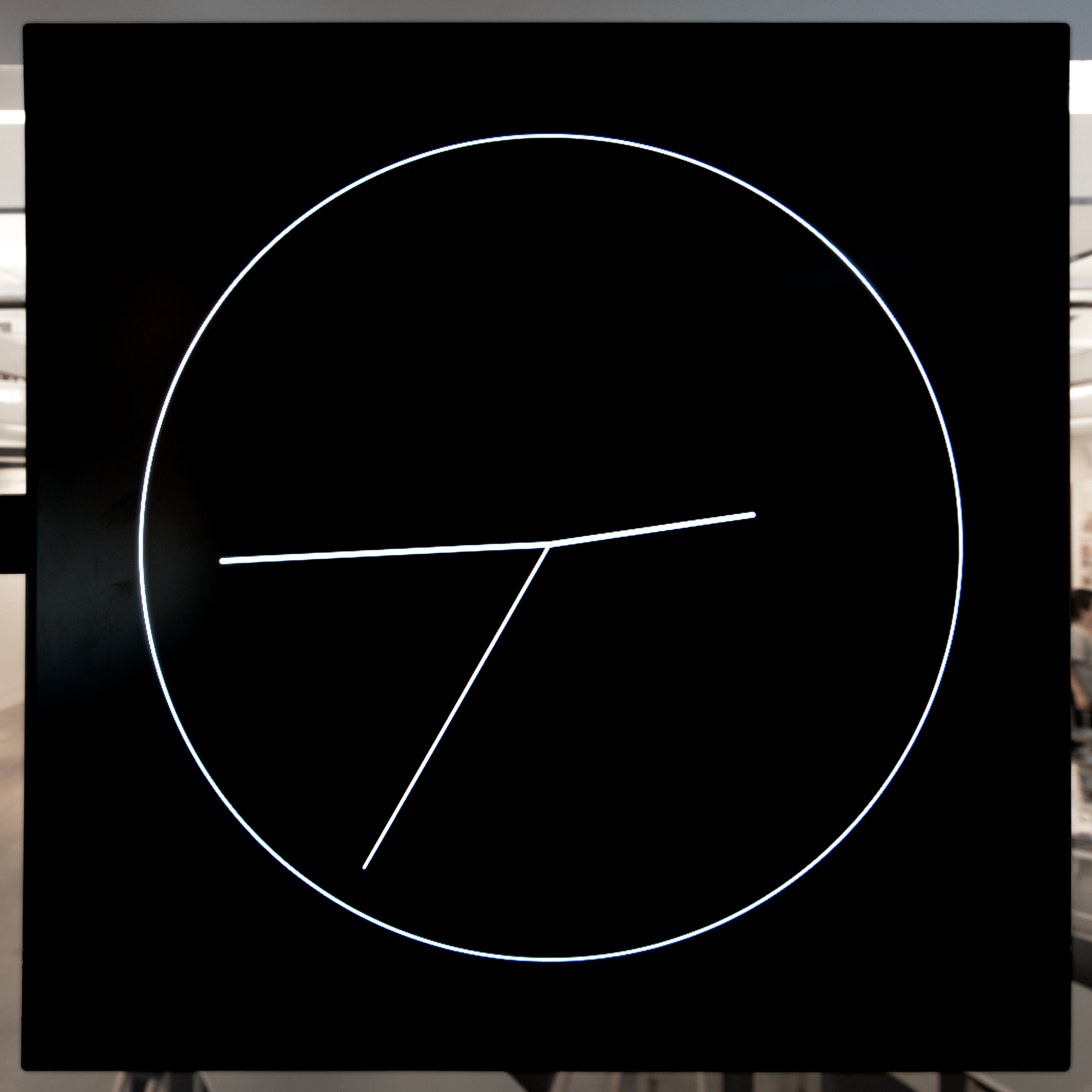 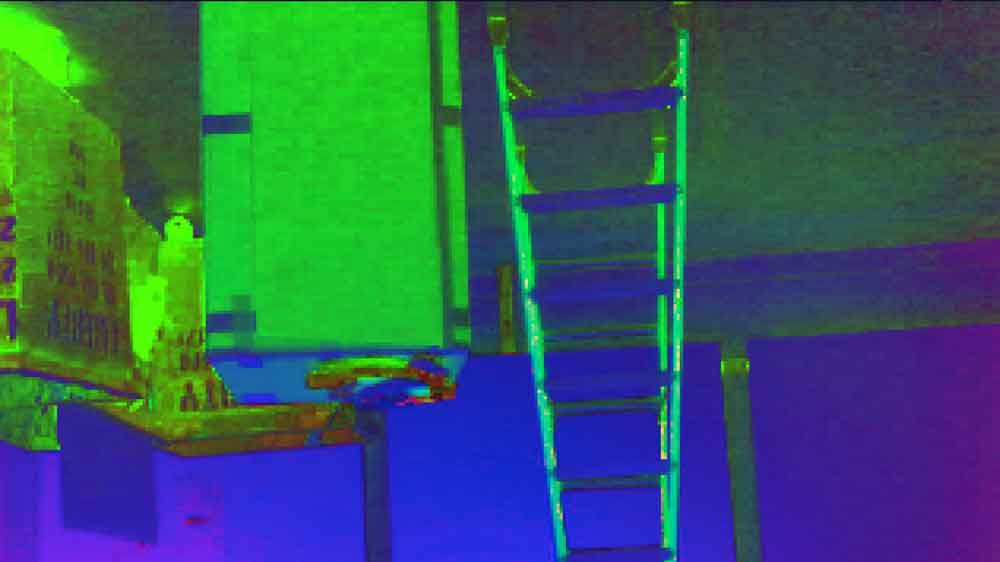 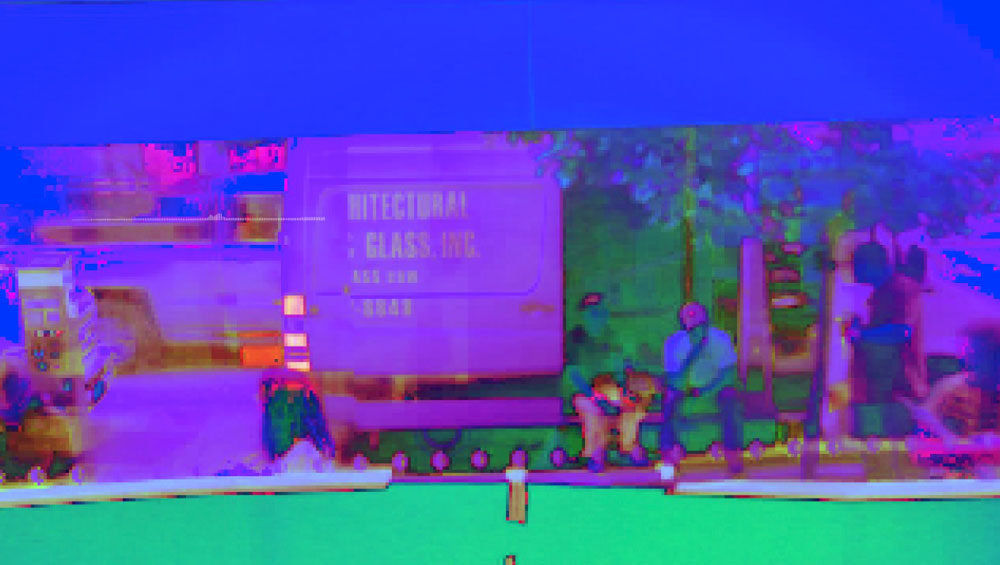 The Clock, commissioned for Public, Private, Secret, consists of two parts: a digital monitor at the front of the building, facing the street, and a pair of projections in the rear of the museum’s public space. The wall-mounted projections stream live-video data drawn from eight cameras in the front and throughout exhibition spaces, positioned by artist Sean Donovan. Custom software strips the position information from this image stream and reorganizes the remaining data into an abstracted grid of organized pixels. By altering the original pixel positions, any immediate reading of the space is frustrated; instead, these new images register as dynamicdata that is more legible by a machine than a person. Rather than pictures of the space, these are recordings of what is changing in it, over time. The projections are accompanied by a small digital monitor installed facing the street. Here, custom software creates a digital rendering of an analog clock face as a marker of the consistent back-and-forth play between the continuous and discrete—digital and analog—that describes the way we live with images today.

Charlotte Cotton: I do want to start by saying how profoundly grateful I am that you came on board with this project. As you know, you are my person of choice when I have a project where design is at its conceptual core.

David Reinfurt: Thank you also, for such a perfect invitation for me. I took the invitation at face value—to design a clock for the front space. I think when we first started to talk through the ideas, it was a much more straightforward design job, in a way: how you could take the pieces and ideas that already existed and turn them into a clock. And then, as we went deeper into the ideas, the design became more fundamental to the concept and meaning of the clock.

CC: We should say that the leading but premature idea—and one we did not end up realizing—was about bringing together real-time feeds from open webcams across the world. Either gridded or sequenced as projections, I’d imagined the notion of time held within the webcam content, and the design as a container for this. Our main criteria was concerned with how to affect the awareness in visitors of the issues raised by Public, Private, Secret when in the front space, before entering the exhibition. We were thinking through how our own bodies can be used as state and corporate data via the public and private cameras that we interact with on a daily basis. We talked about the clock as creating a “beautiful awareness” in visitors to the front space—a clock that acted as a keeper of time but with a sensitizing function that fed off the issue of privacy, and subtly prepared you for going through the threshold into the exhibition. The second criteria was that I wanted the front space to function as a public space—like a village square with its café, library, poster wall and the clock. Every communal and public space should have a clock! It encourages observation and discussion; it becomes a landmark within a space to congregate.

DR: You certainly had the idea of this public space from the first meeting we had about the project. When I started, the first piece of work was to disentangle the possible content we could use from the core aims for the clock, and to focus on the reassuring synchronicity of all looking at the same thing rather than an experience of dispersed subjectivity.

CC: Ultimately, it was your decision to move down the direction of having the clock use two side-by-side projectors that take the CCTV feeds that we set up in the ICP Museum [working with artist Sean Donovan on their placement] to generate the visual content of the clock. Which is really quite amusing since you were quite set against this idea initially! Tell me more about this.

DR: [Laughing] I know! I thought it was a horrible idea because I was confused by all the tension between the possibility that the CCTV element would displace you rather than locate you, which is the aim of the Clock. A clock is something that you meet under and are ambiently aware of, whereas the close-circuit feeds could end up contradicting this aim by making you leave the physical location and think about “somewhere else.” Then I thought about it more, and unpacked the real issues and, to me, it came down to architectural issues and thinking about how you invite people to visually stay in this space. I worked backwards—formally and visually—from what I wanted to see. It became about these ambient, slowly changing, abstract projections that act to reinforce the space rather than representations that push you off into elsewhere. And then I was left with the question of how to create this in a way that is meaningful rather than simply decorative. That’s when I came back around to the idea of using CCTV cameras to generate the material. And this brought in an idea that’s been sitting in the front of my mind for a while, about the lack of distinction between a photograph and a digital file of any kind. Either way, it is a collection of data in the coarsest sense, and its information is less to do with what is innate to the data file and more to do with its representational qualities and the way that it is displayed. It can be displayed a lot of different ways but the data file remains essentially the same. And the claim to truth that each version of an image can make is essentially the same.

CC: Absolutely, and no version has a real claim to being the original or the originating source. It also makes me think about source no longer being the meaning within in an image...The Clock is not existential, it doesn’t ask you to think about where the originating image is situated or how it is changed; there is total equivalency between the moments when you can make out the movement of people through the space captured on the CCTV feeds and those when you have algorithmically stripped the x and y coordinates, creating an abstract image. The experience is about the mutability of image data. The emotions that I experience when looking at the Clock are very much about how our bodies, as they move around public spaces, are caught up in this mutability of the image and the prospect of who or what is reading that data. When captured on surveillance cameras, we are ourselves merely data that can be deployed and displayed in multiple ways.

DR: Of course, there are many ways that we could have represented the image-file data but the way I got to sorting the data was held within the idea of one-to-one mapping. That nothing was lost in translation between one version of an image file and another. Nothing is gotten rid of—it’s the same information, just put in different positions within the image. I have been reading a book called The Art of Computer Programming, by Donald Knuth, first published in 1962. It was something I had been meaning to read for a long time. The first chapter is about fundamental algorithms and sorting patterns, i.e., how do you take something and put it into an order. There are different ways to approach this but the basic idea of putting something into a new order with nothing lost in translation seemed like a good place for the Clock to start.

CC: I think that this sensibility—your design sensibility—is also clearly marked in the Twitter-based bot @pblcprvtscrt that you have created, where followers receive one of the abstracted images generated by the Clock algorithm on the hour, every hour.

DR: We had just done the O-R-G Twitter bot O-R-G *now* [@O_R_G_now] that tweets out a clock face once an hour, which felt like a nice idea to populate your Twitter timeline.

CC: Again, it’s a very mutable design idea that does, as you say, populate existing flows of media and impact on the ways that we experience images.

DR: It highlights the fact that you don’t typically read the hours in a Twitter timeline, that it’s simply the organizing principle of the sequence of tweets. The Clock bot works in a similar manner, sending out a single image alternately from the right and left projectors in the ICP Museum, which gives you this “gift” of color-sorted pixels once an hour. They are distinct and punctuate your Twitter timeline with these abstract images of CCTV documentation from the ICP Museum.

CC: Since the beginning of this process, I’ve had very strong opinions about the physical manifestation of digital imaging in the design of the ICP Museum. Specifically, I didn’t want us to fetishize digital technology—no banks of screens like a news corporation lobby, for example. As a result, the double projection of the Clock felt pretty much the only form that your project could take, because it does not suggest that the platform displaying the imagery is somehow defining the digital character or meaning.

DR: Formally, the projection quality does soften the impact of the images—but then, they are projected very big. It is architecturally scaled. So one part of using coarse pixels and the old fashioned, “computery” color palette is to move away from technological fetishism, which is a potential consequence of working at this scale. So it looks a little bit out of date, and a little bit clunky.

CC: At the same time, a projection isn’t nostalgic; it maintains its value as a still-used technology so it feels like a contemporary default. I also like the way that the projections span a plane in the architectural space of the building. This is especially pronounced when seen from the street, looking into the space. With the digital screen showing an analog clock face at one of the front windows [the other component of the Clock] and the projections then setting back and leading you through space, they create an image environment for the front space of the ICP Museum that subtly asks you to pay attention to what is at stake in Public, Private, Secret.

This interview was originally published on publicprivatesecret.org on June 20, 2016.

Exhibition Future Exhibitions Event Ultraconcentrated: Image, Media, Software
This website stores cookies on your computer. These cookies are used to collect information about how you interact with our website and allow us to remember you. We use this information in order to improve and customize your browsing experience and for analytics and metrics about our visitors both on this website and other media. To find out more about the cookies we use, see our Privacy Policy.
I Accept I Decline