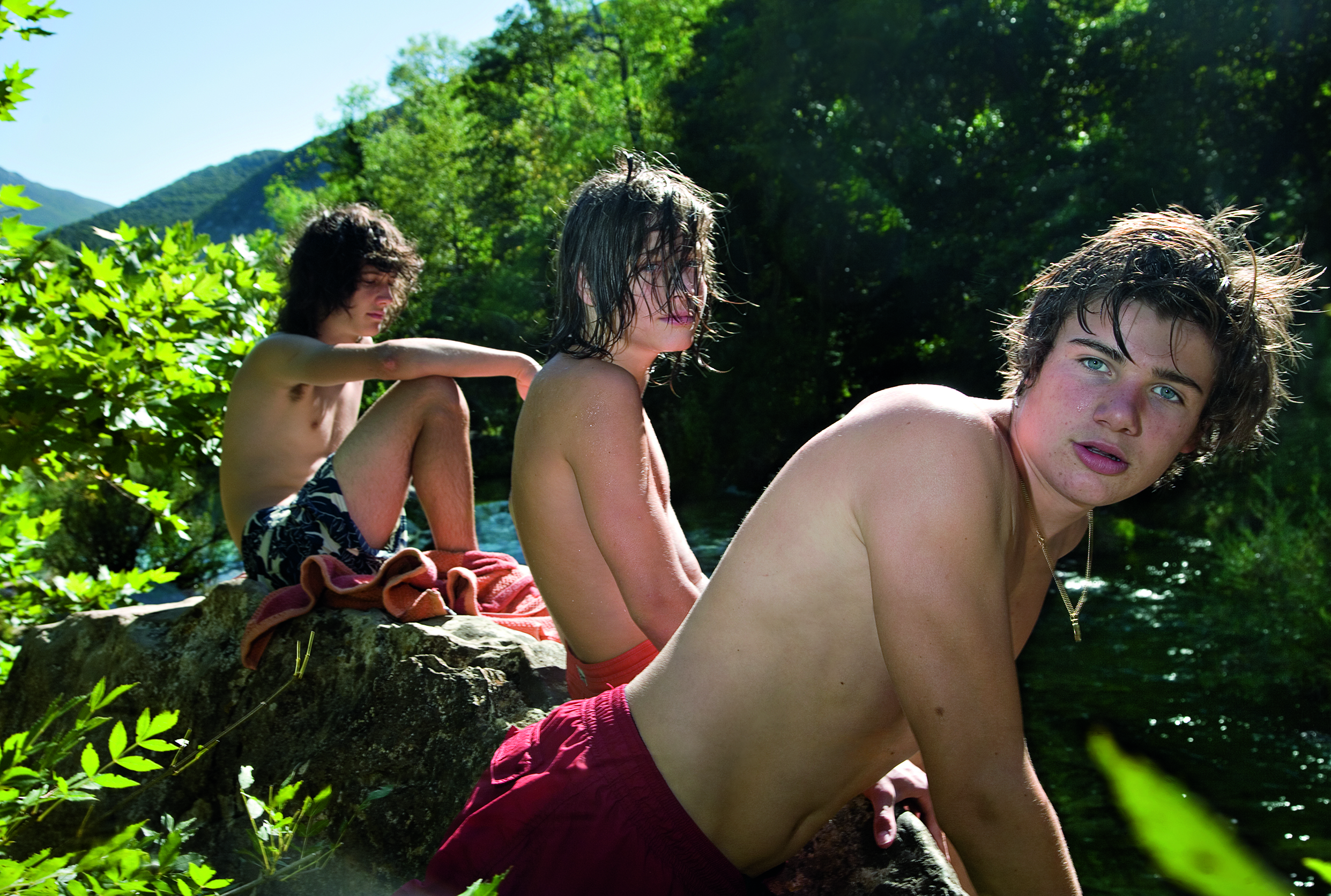 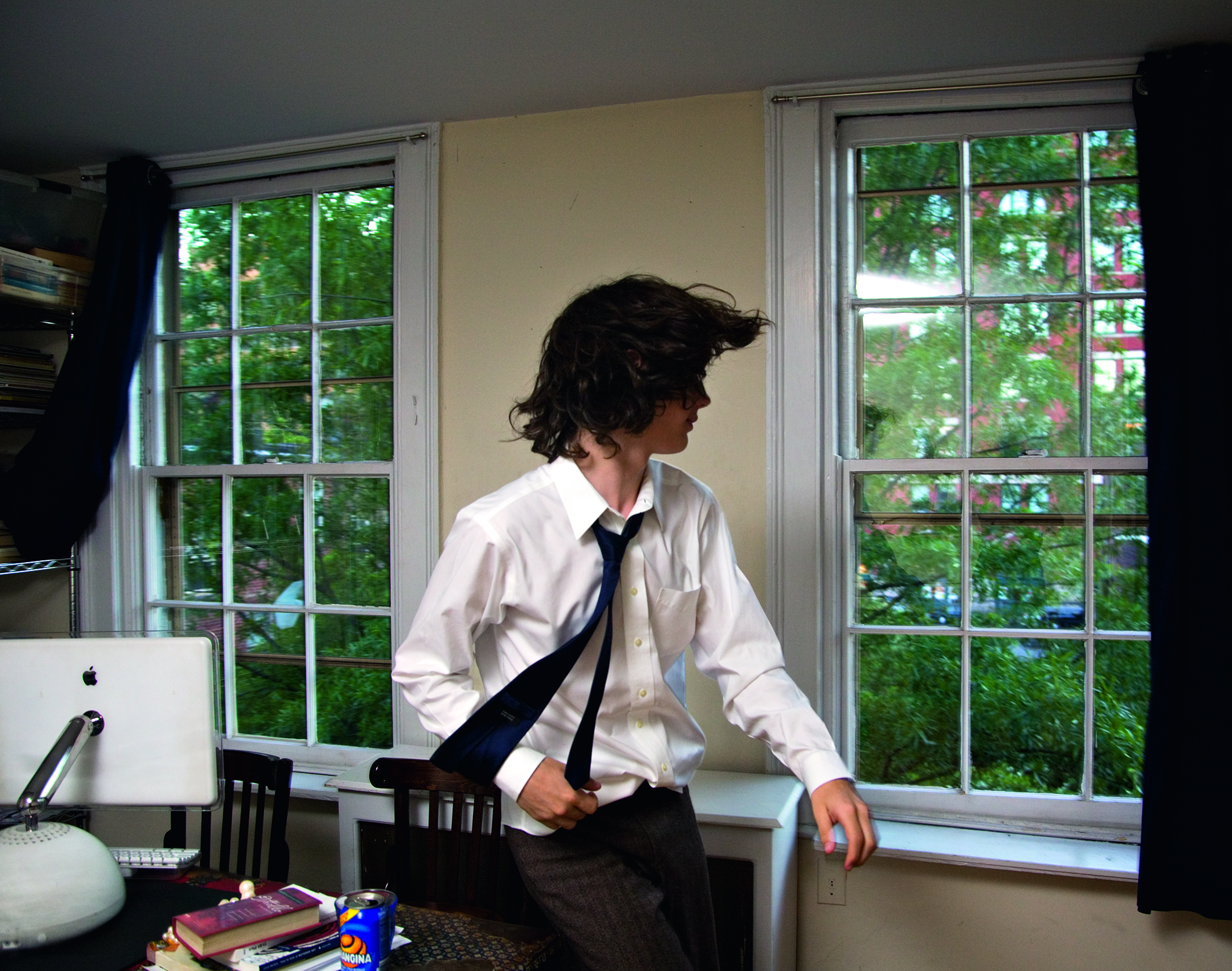 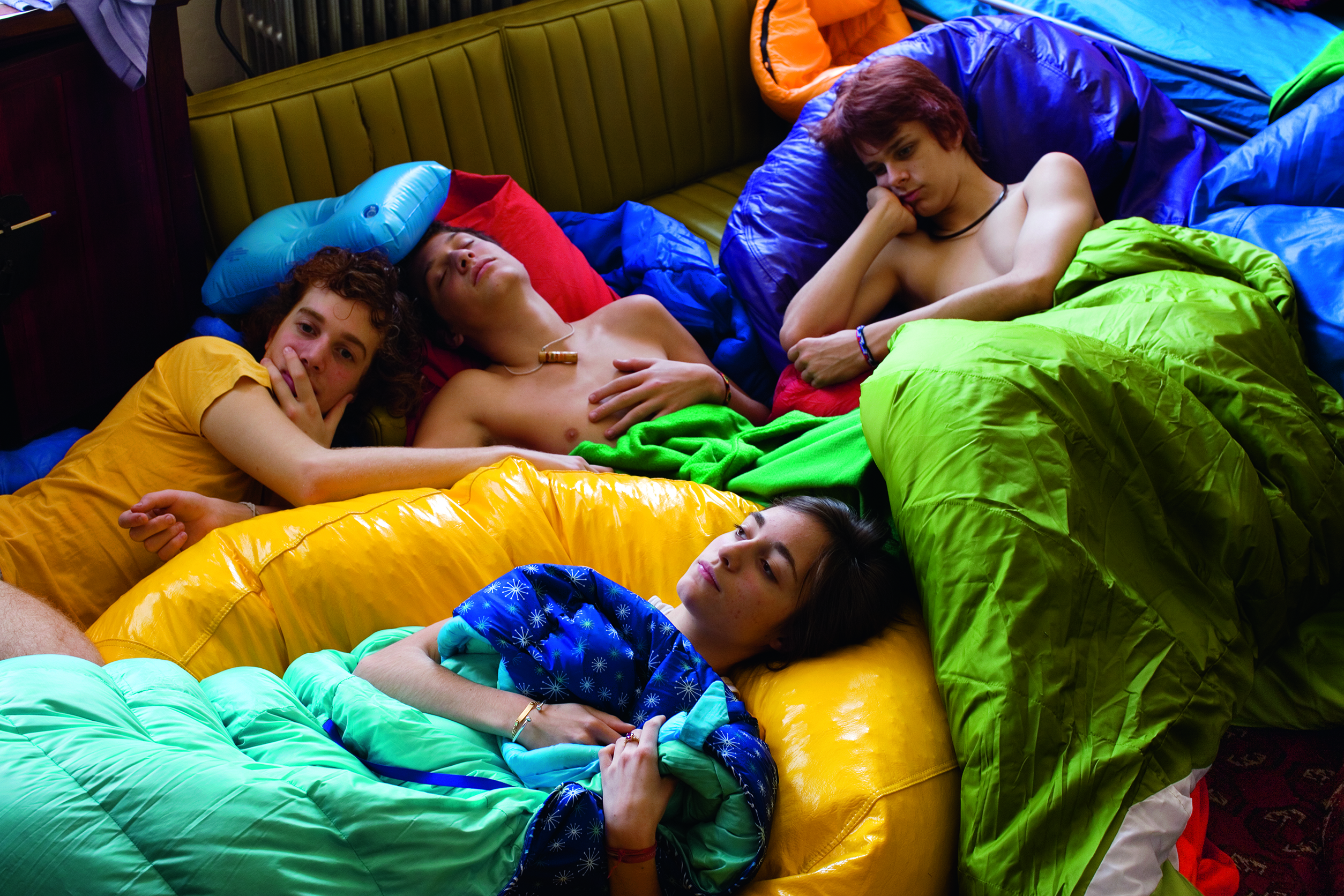 Sasha Bush:  When and how did the project behind Nicolas & Adrien. A World with Two Sonsbegin?

Martine Fougeron: I started the project in 2005, my two sons Nicolas and Adrien were respectively 14 and 13. I was attending ICP’s One-Year Certificate Program in Creative Practices, known as General Studies at the time. I was taking a thrilling large format camera class with Benjamin Donaldson. I borrowed a 4 x 5 from ICP; it is a bulky and heavy camera so I set out to make my first experiences at home. Nicolas, my eldest son, was in full revolt and his power over me was to refuse being photographed. Fair enough. As soon as he saw my 4 x 5, he would run. My concept was to have a domestic scene of a dinner at home. The founding image is called “Adrien and Nicolas Dining.” It was at night, and I had prepared a really nice American cheeseburger with lettuce and tomato. I had set up a hot light and put the heavy camera on a tripod, composed the scene, pre-focused and pre-measured the camera on my son’s hypothetical head position because I know how and where he always sits. I pinned a cashmere sweater to the velour seat to mark his position. I called his name, “Nicolas,” as he was eating and snapped the picture instantly, as I knew I had only one real chance.

SB: Before you began this project, what was your own relationship to “family pictures?” Did you photograph your sons or family?

MF: My father and grandfather were avid photographers. I took black-and-white darkroom classes at Wellesley College back in the 1970s. Before studying photography formally in 2001, I would take a lot of family pictures, and a lot of travel pictures which I would organize in albums.  I have many images of my two sons from their birth. But these photos were not interiorized or informed or themed. Also, these photos had a definite snap-shot aesthetics.

SB: Are your sons and their friends your subjects or do you collaborate with them?

MF: They are my collaborators in that they allow me into their world. They also helped with the edit. And they would comment on the images, and themes. They knew when it was genuine or not. Overall, they both appreciated the project as they realized it was a diary of their lives—an homage to them. Seeing the total story in a gallery for my solo show, with the eighteen photographs hung, was a revelation to them. It told a story and they realized their mother was a professional artist. They also became much more cooperative because their friends liked the pictures and told them how much the project expressed the life of their teen tribe.

SB: Can you talk about this tension, in pre-envisioning, staging, and discovery? How do you balance preparation with an ability to discover and to adapt to different situations?

MF: I made of lists of situations, emotions, and events I wanted to photograph at a given period. Once that list was made, I would let my intuition tell me if it was the right moment, the right timing. But I never knew when the right timing was before it occurred, and then I would be ready.

To give you an example, on my list was to take an image of parties and sleepovers on Saturday night in my sons’ bedrooms, which were on top of my studio. I could feel the vibe upstairs. And in function of the vibe, I would go into their bedrooms full of kids, and photograph for 20 minutes, as I was talking to them. Usually if after 20 minutes or so, I would disappear. If I was happy with the images, I would try to not repeat that situation.

SB: What advice would you give to someone working on a book who is looking for ways to put their work out in the world?

MF: Stay alert and tall. Your story is the only story that is your own. A book is for a photographer the only medium that tells the story in the way you see the full story. It is the ultimate chariot of your work and vision. Cherish it. The more unique it is, the more it will be cherished. Its commercial success is not a sign of its success. A book is an eternal object and subject in its own right. It could last much beyond our own mortality. It is a gift of an artist’s vision, to be forgotten or embraced by future generations, who knows? It is not for the artist to judge. It is just for the artist to give, as an offering of love to the gods and the god within each of us that spark of our unique artistry and trajectory.

david seidner [Robert Mapplethorpe]
This website stores cookies on your computer. These cookies are used to collect information about how you interact with our website and allow us to remember you. We use this information in order to improve and customize your browsing experience and for analytics and metrics about our visitors both on this website and other media. To find out more about the cookies we use, see our Privacy Policy.
I Accept I Decline