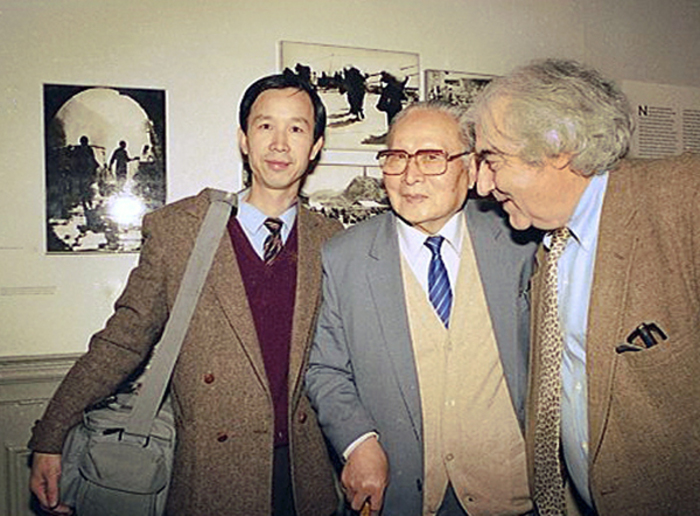 China’s storied twentieth century provides ample fodder for any master raconteur. Tales of heroics, hard work, adventure, rebellion, and victory abound, as do accounts of atrocities, devastation, and repression. Chinese photographer Wu Yinxian (1900-1994), a visual storyteller and long a close acquaintance and comrade of Chairman Mao Zedong, chose to portray the victorious route, proclaimed by the Communist Party, through his striking depiction of workers, peasant rebellions, party leaders, and nationalistic ceremonies. Extremely prolific, not only did Wu produce countless images of the revolutionary struggle, but he also extensively documented daily life throughout China.
During the 1920s, while the Nationalist Party and the Chinese Communist Party struggled for power, Wu began his photographic career, one that would eventually span over seventy years. Initially taking pictures of the working class in Shanghai and their difficult lives, he went on to work as a cinematographer on a number of extremely popular, often leftist, films in the 1930s and 40s like Scenes of City Life (1935) and Brave Sons and Daughters in Storm (1937). His photographic images from this early period, often highly contrasted with dramatic lines, present a romanticized view of the common Chinese worker—honest, positive, hardworking, and engaged.
In the early 1940s, as the CCP gained power, Wu took a series of seminal portraits of Mao and other party leaders in Yan’an, thereby establishing his reputation and initiating a long relationship as one of the official party photographers. Wu continued to photograph throughout the beginning of the Communist rule, the Great Leap Forward (1958-61), the Cultural Revolution (1966-76), and afterwards, depicting both everyday life and political functions. Moving into color photography in the late 1970s and early 80s, Wu eventually came to work on a few large commissions for the government, notably the interiors of Party Headquarters. Throughout the majority of the ywentieth century, Wu played a seminal role in the establishment of the dramatic nationalist aesthetic so key to the representation of the Communist Party, all the while, pursuing his own artistic view.
Libby Pratt
Archived Items
Sort by
No results found.
Try another search or browse ICP.
View More
This website stores cookies on your computer. These cookies are used to collect information about how you interact with our website and allow us to remember you. We use this information in order to improve and customize your browsing experience and for analytics and metrics about our visitors both on this website and other media. To find out more about the cookies we use, see our Privacy Policy.
I Accept I Decline