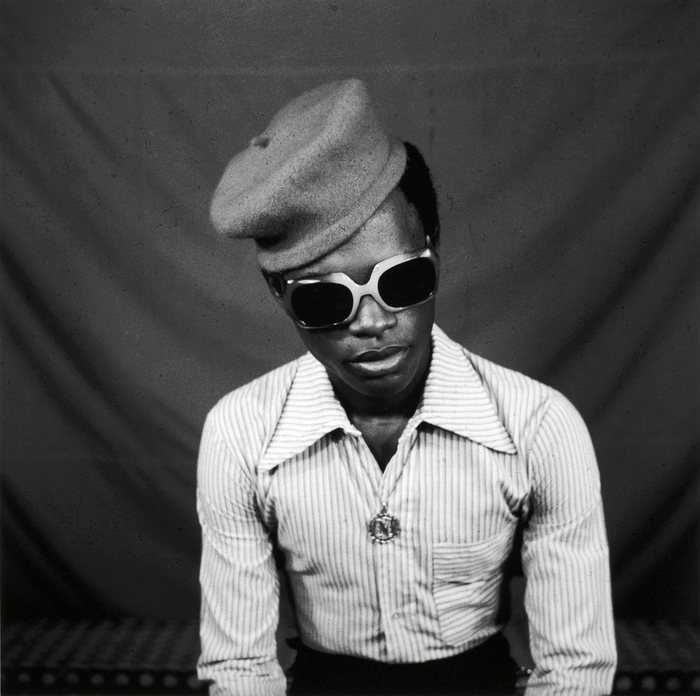 Although born in Cameroon, Samuel Fosso spent most of his childhood in Nigeria among his people, the Igbo. According to the photographer, he was paralyzed until the age of three, when he was thrown off the roof of a building by a healer. This was arranged by his grandfather, who was also a healer and village chief. Fosso's 2003 series titled le reve de mon grandpere pays homage to his grandfather, where Fosso is brightly painted as a healer and dressed as a chief. By the time he was five, the Biafran civil war broke out in Nigeria, making the area unsafe for many Igbos. In 1972, Fosso moved to Bangui, capital of Central African Republic, to work in his uncle's shoe factory. He took an interest in photography and left the factory to apprentice for a photographer. After learning the medium, Fosso set up his own photography studio in Bangui at the age of thirteen. Like many commercial photographers, his goal was to photograph people at their best providing them with elaborate dress and backdrops.
Fosso began to experiment with self-portraiture after studio hours initially to make pictures to send to his grandmother in Nigeria. The teenager became fascinated with watching himself grow and change guises, wearing rebellious Western clothes like bellbottoms and tight shirts, mimicking the outfits and poses he saw on album covers. In these early self-portraits, the photographer plays with a pleasant form of narcissism, common in adolescence.
Fosso remained unknown outside of Bangui until 1994, when the French photographer Bernard Deschamps discovered his work while organizing an exhibition of African photography. This show brought Fosso's work to an international audience. By 1997, he was working in color on a commission for a chain of French department stores with a series titled TATI. Here he appears in elaborate costumes and sets as different personas--a pimp, a pirate, a golfer, and an African chief, to name a few-playing with different notions of beauty and of gender roles. Fosso continually returns to black-and-white and now explores more serious subjects, such as in his series Memoire d'un ami (2000), a rumination on fear and vulnerability in the wake of a friend's murder by police outside of Fosso's studio in Bangui. His latest series, African Spirits, is a collection of fourteen autoportraits of Fosso's reinterpretation of icons from black cultural monuments, the American Civil Rights movement, and African independent states. Fosso is recognized as one of Africa's most important contemporary artists. He continues to live and work in Bangui.