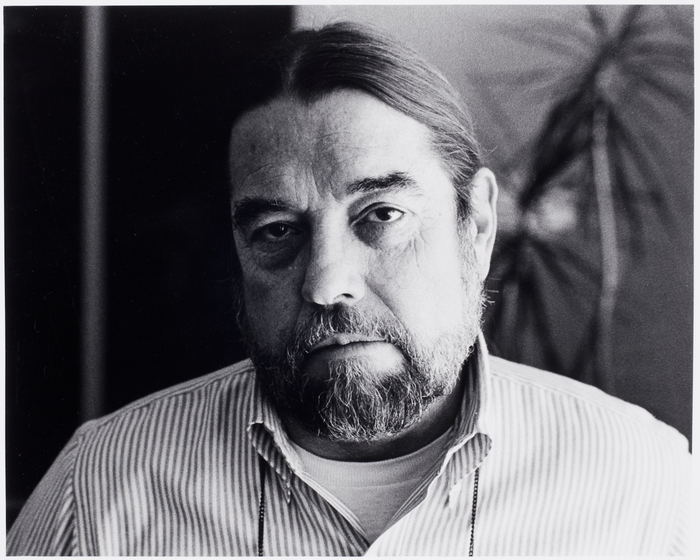 Robert Heinecken was born in Denver and raised in Iowa and California. He enrolled at the University of California at Los Angeles in 1951, then interrupted his studies to serve as a naval cadet and jet fighter pilot in the Marines. Heinecken completed a BA in 1959, and an MFA in design, drawing, and printmaking the following year, and was then hired by UCLA to teach a photography course. He began experimenting with the medium and also made the acquaintance of Van Deren Coke, Jerry Uelsmann, Ray Metzker, and Harry Callahan. Throughout his career, Heinecken has used photography as a medium for manipulation to explore his interest in content and form. His first important series, Are You Rea, published as a set of twenty-five prints, derives its title from the partial text that became visible when several pages of magazine advertising and text were layered over a light box and rephotographed. A thematic investigation of sexuality, the media, and the nature of desire has been a frequent undercurrent of Heinecken's diverse body of work, which includes collage, montage, abstraction, manipulation of large-scale advertising and commercial imagery, and portraiture. Heinecken has taught at Harvard, the San Francisco Art Institute, the School of the Art Institute of Chicago, and elsewhere. His work appeared in the landmark 1978 Museum of Modern Art exhibition Mirrors and Windows: American Photography Since 1960, and a major retrospective was presented by the Museum of Contemporary Art in Chicago in 2000.
Heinecken's use of photographs and other images as raw material for manipulation represents a departure from the tradition of straight photography. While emphasizing the banality of the media, his work also suggests our collective responsibility in having perpetuated objectification and exploitation. An exploration of form without rigid formality, his puzzle collages of the mid-1960s allow viewers to move small mounted abstract photographs in prismatic variations, barely affecting their overall Cubist aesthetic.
Meredith Fisher
Handy et al. Reflections in a Glass Eye: Works from the International Center of Photography Collection, New York: Bulfinch Press in association with the International Center of Photography, 1999, p. 218.
Archived Items
Sort by
No results found.
Try another search or browse ICP.
View More
This website stores cookies on your computer. These cookies are used to collect information about how you interact with our website and allow us to remember you. We use this information in order to improve and customize your browsing experience and for analytics and metrics about our visitors both on this website and other media. To find out more about the cookies we use, see our Privacy Policy.
I Accept I Decline