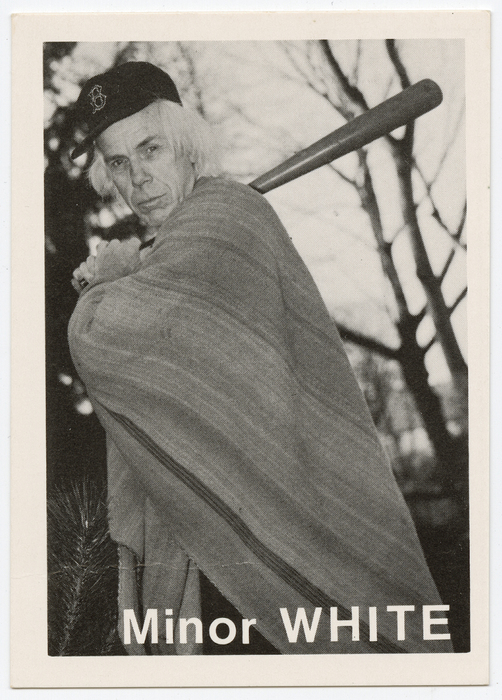 Minor White was born in Minneapolis, and received a B.S. degree in botany from the University of Minnesota in 1933. He moved to Portland, Oregon in 1937, where he worked as a photographer for the Works Progress Administration and taught photography until he was drafted in 1942. Upon his military discharge, in 1945, he went to New York, where he studied art history and aesthetics with Meyer Schapiro. He met Beaumont and Nancy Newhall, the photography curators at the Museum of Modern Art, as well as Edward Weston, Paul Strand, and Alfred Stieglitz, whose concept of "equivalence" had a profound effect on White's thinking. In 1946 he accepted a teaching position in the California School of Fine Arts photography program, which was run by Ansel Adams. Adams and White became friends, and founded Aperture magazine with Dorothea Lange, the Newhalls, Barbara Morgan, and others in 1952. From 1953 to 1957, White worked with the Newhalls at the George Eastman House in Rochester. He taught photography at the Rochester Institute of Technology and the Massachusetts Institute of Technology, cofounded the Society for Photographic Education, and edited Aperture until 1970. White won a Guggenheim Fellowship in 1970, and exhibitions of his work have been held at the San Francisco Museum of Modern Art, the George Eastman House, the Philadelphia Museum of Art, and the Princeton Art Museum. Among his publications are Sequence 6 (1951), Mirrors, Messages, Manifestations (1969) and Octave of Prayer (1972).
Through his mystical approach to photography, Minor White has become one of the most influential photographers of the postwar era. His landscape photographs often create abstract images that disorient the viewer and penetrate beneath the surface of the subject. White developed sequences for these pictures that underscored the meditative possibilities of reading photographs as a means of spiritual self-knowledge, a practice that continues to inspire many contemporary photographers.
Lisa Hostetler
Handy et al. Reflections in a Glass Eye: Works from the International Center of Photography Collection, New York: Bulfinch Press in association with the International Center of Photography, 1999, p. 231.
Archived Items
Sort by
No results found.
Try another search or browse ICP.
View More
This website stores cookies on your computer. These cookies are used to collect information about how you interact with our website and allow us to remember you. We use this information in order to improve and customize your browsing experience and for analytics and metrics about our visitors both on this website and other media. To find out more about the cookies we use, see our Privacy Policy.
I Accept I Decline