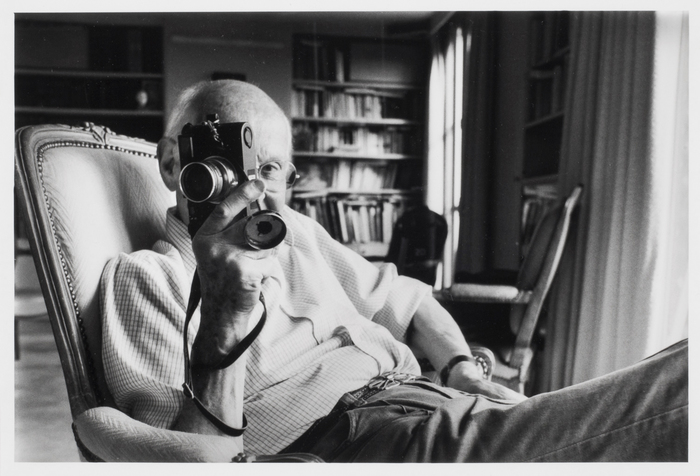 Henri Cartier-Bresson has intuitively chronicled decisive moments of human life around the world with poetic documentary style. His photographs impart spontaneous instances with meaning, mystery, and humor in terms of precise visual organization, and his work, although tremendously difficult to imitate, has influenced many other photographers. His photographs may be summed up through a phrase of his own: "the decisive moment," the magical instant when the world falls into apparent order and meaning, and may be apprehended by a gifted photographer.
Cartier-Bresson was born in Chanteloup, and studied literature at Cambridge University in 1928-29. He began photographing in 1931 and purchased a Leica in 1933. He joined an ethnographic expedition to Mexico the next year, and in 1935 studied cinematography with Paul Strand. He assisted Jean Renoir in 1936 and 1939, and made his own documentary, Return to Life, in 1937. He was drafted into the film and photo unit of the French army in 1940 and was taken prisoner by the Germans that same year. After three years of imprisonment he escaped and began working for the French underground. In 1943 he made series of portraits of artists, including Matisse, Bonnard, and Braque. Through 1944 and 1945, Cartier-Bresson photographed the occupation of France and its liberation. In 1947 he co-founded the Magnum agency with Robert Capa, Chim (David Seymour), and George Rodger and he spent the next twenty years traveling around the world. He received the Overseas Press Club Award four times; the American Society of Magazine Photographers award in 1953; and the Prix de la Société Française de Photographie in 1959, among other honors. In 1966 he left Magnum, which remained his agent, and devoted himself to drawing. Cartier-Bresson's extensive publications include From One China to Another (1954), The Europeans and People of Moscow (1955), The Face of Asia (1972), and The Decisive Moment (1973).
Lisa Soccio
Handy et al. Reflections in a Glass Eye: Works from the International Center of Photography Collection, New York: Bulfinch Press in association with the International Center of Photography, 1999, p. 211.