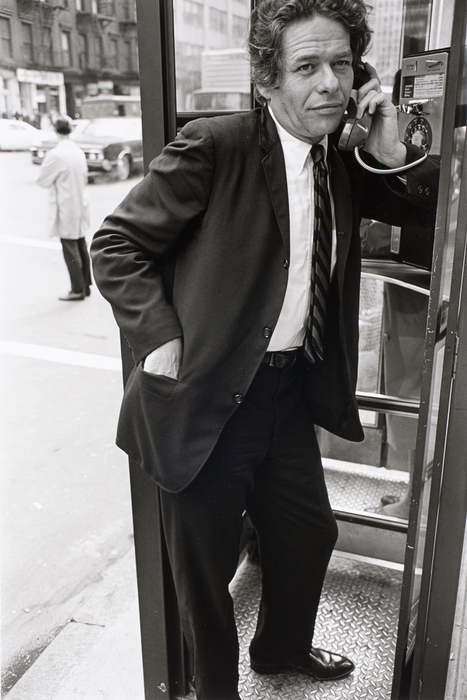 Garry Winogrand was born in New York City and became interested in photography while serving in the military as a weather forecaster. He studied painting at City College (1947-48) and at Columbia University (1948-51), where he learned how to develop and print. In 1951 he studied photography with Alexey Brodovitch at the New School for Social Research. Afterward he worked commercially for photography agencies, freelanced for magazines, and also did personal work. Winogrand's photographs were exhibited widely during his lifetime, in Edward Steichen's The Family of Man at the Museum of Modern Art, Towards a Social Landscape at the George Eastman House, and New Documents at the Museum of Modern Art. He was often grouped with photographers such as Danny Lyon or Lee Friedlander as a documentarian of the "social landscape." Winogrand received three Guggenheim Fellowships, to produce "photographic studies of American life," to study "the effect of the media on events," and to photograph California. He taught photography at the School of Visual Arts and Cooper Union in New York, and the Art Institute of Chicago, among other institutions; and published seven books of photographs, including The Animals (1969), Women Are Beautiful (1975), and Public Relations (1977).
Garry Winogrand's photographs are sophisticated, chance observations of daily life that demonstrate his mastery of the 35-millimeter camera. He was fond of visual puns and tilted exposures; he photographed, he said, "to see what the world looks like in photographs." Although his approach was lighthearted, his formal acuity and absurdist appreciation for the visual world were serious innovations that reverberate in the work of many contemporary photographers.
Lisa Hostetler
Handy et al. Reflections in a Glass Eye: Works from the International Center of Photography Collection, New York: Bulfinch Press in association with the International Center of Photography, 1999, p. 232.
The Garry Winogrand Estate is represented by the Fraenkel Gallery, San Francisco. For press and permission inquieries contact the gallery at [email protected].