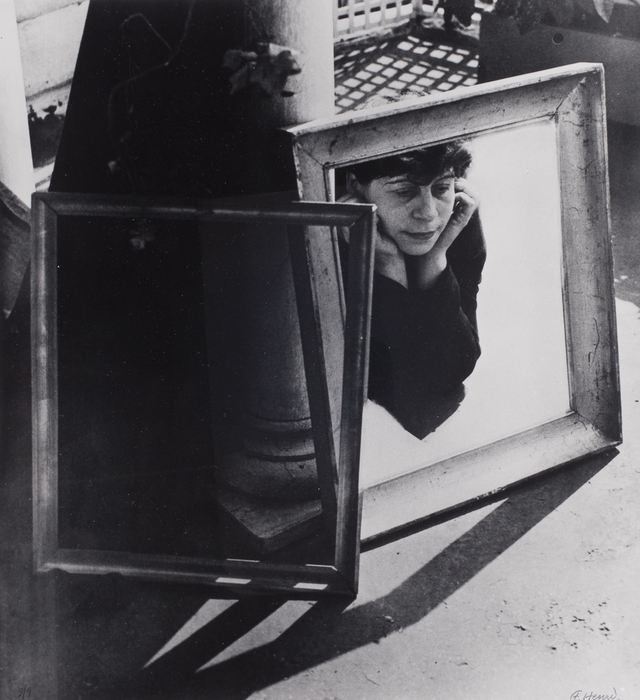 Born in New York in 1893, Florence Henri left the United States permanently at age two, following the death of her mother, and spent her childhood constantly traveling between maternal relatives in Silesia (then part of Germany), a convent school in Paris, and family homes in London and the Isle of Wight. Trained as a pianist, she studied music with Ferruccio Busoni in Rome and became acquainted with important figures in the Italian Futurist movement. She relocated to Berlin during World War I (working briefly as an accompanist for silent films), and abandoned her musical career to pursue painting. Denied entry into France in 1924 and declared “stateless,” Henri attained Swiss citizenship through a hasty marriage to a Swiss domestic servant. She moved to Paris by 1925, and began studying painting with André Lhote and Fernand Léger, working in the visual idiom of late cubism.
In 1927 (at age 34), Henri enrolled as a non-matriculating student at the Bauhaus in Dessau, where she studied photography for the first time with László Moholy-Nagy, developing a close friendship with Lucia Moholy, who strongly encouraged Henri’s experimentation with the camera. Henri’s manipulation of mirrors, prisms, and reflective objects to frame, isolate, double, and otherwise interact with her subjects--one of the most distinctive and adventurous features of her photographic work--often confounds viewers’ ability to distinguish between reality and reflection. Henri also experimented with photomontage, multiple exposures, photograms, and negative printing in her work, consistently constructing images that undermine the camera’s capacity for realism to create multifaceted, artificial, imagined spaces. The spatial and psychological ambiguity produced by Henri’s complex and disorienting compositions accounts not only for their status as virtuosic examples of the formal and technical experimentation of New Vision photography at the Bauhaus, but also for the currency of her work within discussions of Surrealism. Between 1928 and the late 1930s, Henri produced the work for which she is best known, including her mirror compositions, participating in the Film und Foto exhibition in Stuttgart in 1929. She opened a successful studio in Paris and took on advertising projects to supplement her income, continuing to feature mirrors and utilize photographic techniques promoted at the Bauhaus in her professional work. Henri renounced photography in the early 1960s, and lived in France until her death in 1982.
Anna Linehan