Evgenii Khaldei | International Center of Photography
Join our mailing list
Stay updated on our latest news.
exhibition
Close Enough: New Perspectives from 12 Women Photographers of Magnum
exhibition
Death in the Making: Reexamining the Iconic Spanish Civil War Photobook
Shop Become a Member Support ICP Subscribe Login
ICP will be closed on Thursday, November 24 for Thanksgiving. ICP's museum will be open on Friday and the rest of the weekend with our usual hours. ICP's school will re-open on Monday.
Artist 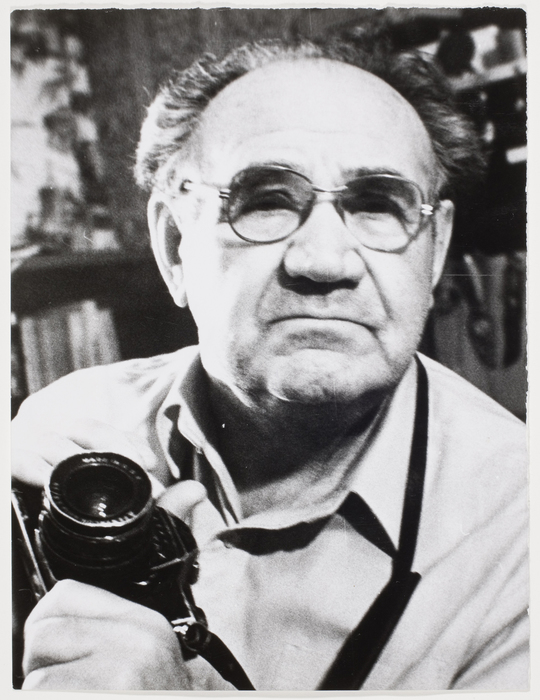 Mostly known in the Western world for his photograph of soldiers planting a flag of the U.S.S.R. on top of the Reichstag in Berlin in 1945, photographer Evgenii Khaldei documented nearly every single day of the battle between Germany and Russia during World War II. Prior to his death in 1997, Khaldei said to have 1,481 negatives covering the war, at the time all kept in his packed Moscow apartment.
Born 1917, the year of the Russian Revolution, Evgenii Khaldei was confronted by violent ethnic disputes in his country at a young age; when he was only one, his mother was shot during a pogrom against the Jewish population in the Ukrainian village where they lived. While she was holding her son, the bullet passed through her body and stuck in Khaldei’s chest. His mother died.
Perhaps as a way to hold on to the memory of his family, the young Khaldei built a camera out of his grandmother’s glasses and a cardboard box. With this he made his first photographs and started to document both the horrifying events as well as the triumphs of the wartime period: “I would have to say that many times my heart was broken. But I also witnessed greatness,” he told Michael Specter in an interview in 1995.
While working for the photo agency Tass, Khaldei supposedly met Robert Capa in Berlin after the war. Capa was shocked to see the antiquated equipment his Russian colleague was using and promised to send a better camera upon his return to Paris. Capa kept his word and, according to the story, within a week Khaldei received a Speed Graphic camera from France.
Although the photograph taken on top of the Reichstag is now seen as an iconic image, it cannot be considered a document of a decisive historic event. Rather, it is a situation that was carefully staged by Khaldei. Once the Russians had reached Berlin in the spring of 1945, the photographer rushed back to Moscow to retrieve a flag of the U.S.S.R., which he planned to raise on top of the Reichstag building in celebration of the Russian victory–similar to what photographer Joe Rosenthal had done a few months before in Iwo Jima, Japan. In the war-torn city of Moscow however, no flag could be found. As an alternative, Khaldei supposedly used red tablecloths from the Tass agency office and asked his uncle, a tailor, to sew a Soviet flag. Back in Berlin Khaldei brought the self-made flag and two soldiers up to the top of the building and photographed the victorious scene. The resulting image was also heavily modified: in one photograph smoke was added and in a second version the two wristwatches of one of the soldiers were removed. The day after Khaldei photographed the Reichstag scene it was published in the Soviet newspaper Pravda.
According to Ernst Volland, one of the curators who organized the large traveling exhibition Yevgeny Khaldei–The Decisive Moment in 2008, the photographer did not seem to have any moral objections against the manipulation of the images. When he was asked about the doubtful reality of the Reichstag scene, he said: “It’s a good photo. I made it. ‘Auf wiedersehen.’”
Despite the many prizes and awards Khaldei received over the years for his oeuvre, he did not make a living from his photography. Instead, he continued to print for other photographers and received only a small state-pension when he retired. Evgenii Khaldei was eighty when he died in Moscow in 1997.
Claartje van Dijk
Archived Items
Sort by
No results found.
Try another search or browse ICP.
View More
This website stores cookies on your computer. These cookies are used to collect information about how you interact with our website and allow us to remember you. We use this information in order to improve and customize your browsing experience and for analytics and metrics about our visitors both on this website and other media. To find out more about the cookies we use, see our Privacy Policy.
I Accept I Decline