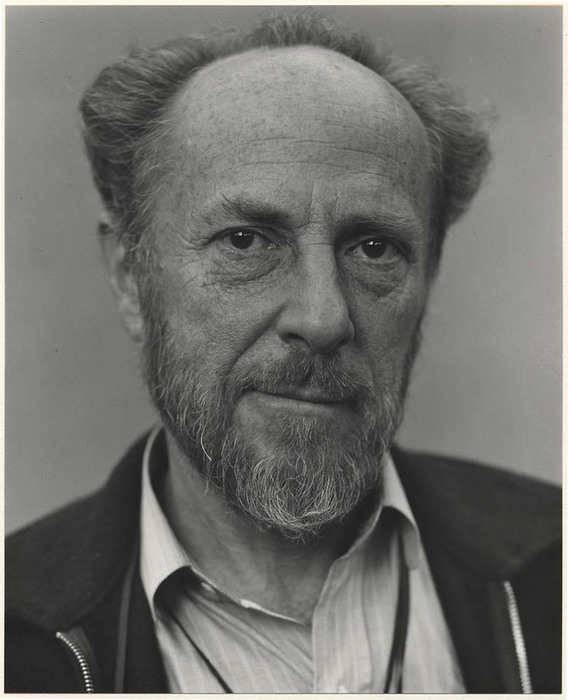 Born in Highland Park, Illinois, Edward Weston received his first camera from his father in 1902; he attended the Illinois College of Photography from 1908 to 1911. From 1911 to 1922 he operated a portrait studio in Tropico, California. The Pictorialist style in which he was working earned him commercial and critical success, but by 1919 he had turned to abstract photographs based on body parts and employing unusual angles. On a trip to Ohio in 1922, he photographed the clean lines and abstract shapes of the Armco Steelworks, and when he met Alfred Stieglitz, Paul Strand, and Charles Sheeler in New York later that year, he gained their support when he showed them this Armco work. Weston subsequently abandoned his Pictorialist style and concentrated on precise studies of such forms as fruits, vegetables, shells, and rocks. In 1928, after a year managing a Mexico City studio with Tina Modotti, he returned to California and photographed the landscape at Point Lobos, incorporating his studies of natural forms. In 1932, he cofounded, along with six other photographers, the f/64 group, which required its members to use the large-format view camera, a small lens aperture, and contact printing in order to achieve precise to detail and careful tonal variations. The landscape photographs that Weston created around this time followed the tenets of f/64 and are some of his most celebrated works. Weston received the first Guggenheim Fellowship awarded to a photographer, among many honors and awards. The Museum of Modern Art held major retrospectives of his work in 1946 and 1975. His Daybooks, daily records of his life as a photographer, were published in the 1960s.
Edward Weston was instrumental in establishing an identity for the West Coast school of photography in the early years of modernism in America. His eloquent combination of expansive landscapes and other natural subject matter with precise, unembarassedly technique created a prototype for the f/64 group's purist style. His legacy continues to this day in the work of contemporary photographers such as Emmet Gowin and Robert Adams.
Lisa Hostetler
Handy et al. Reflections in a Glass Eye: Works from the International Center of Photography Collection, New York: Bulfinch Press in association with the International Center of Photography, 1999, p. 231.
Archived Items
Sort by
No results found.
Try another search or browse ICP.
View More
This website stores cookies on your computer. These cookies are used to collect information about how you interact with our website and allow us to remember you. We use this information in order to improve and customize your browsing experience and for analytics and metrics about our visitors both on this website and other media. To find out more about the cookies we use, see our Privacy Policy.
I Accept I Decline