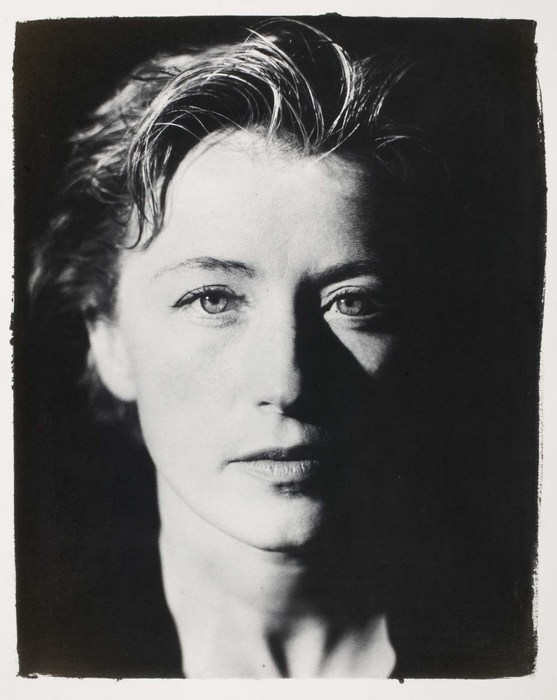 Cindy Sherman's work is probably the most broadly successful of any of the artists who emerged in the late 1970s and were described by critics as "postmodern." She has consistently and prolifically produced photographs that incorporate theoretical concerns with subtlety and sophistication into visually compelling and psychologically powerful images. Unlike many of her fellow contemporary artists, she has avoided the use of text, and has resisted making theoretical pronouncements about her work.
Sherman's first one-person exhibit was held in 1979 at Hallwalls in Buffalo, New York, where she had attended the State University College, receiving a BA in 1976. From 1975 to 1980, Sherman produced a large body of Untitled Film Stills: small black and white prints depicting Sherman in costume within simulated scenarios evocative of film noir, B-movies, and French New Wave films. She continued to explore feminine stereotypes through a characteristic directorial approach in which she employs herself as model. From 1982 to 1984 her treatment of conventional gender roles and commercial images began to include exaggerated and unsettling makeup, costumes, and garish lighting. By 1985, her prints grew in scale, and her imagery became unambiguously repulsive depicting warped fairy tale scenarios, surreal scenes of disaster and dismemberment, and grotesque mixtures of bodily waste and putrefaction. Her own physical presence in these images was largely fragmented or withdrawn. Sherman intermittently pulls back from her descent into total abjection; producing from 1988 to 1990 a series of ironic art historical portraits parodying Old Master paintings. Her use of physical imperfections and distortions evolved into a series of prosthetic sex pictures begun in 1992. With this period, Sherman almost entirely eliminated her own body from her photographs. Sherman has exhibited extensively, having numerous individual shows internationally and a major retrospective at MOCA. She has also been the subject of several monographs, including a substantial critical interpretation of her work from 1975-93 by Rosalind Krauss.
Lisa Soccio
Handy et al. Reflections in a Glass Eye: Works from the International Center of Photography Collection, New York: Bulfinch Press in association with the International Center of Photography, 1999, p. 228.
Archived Items
Sort by
No results found.
Try another search or browse ICP.
View More
This website stores cookies on your computer. These cookies are used to collect information about how you interact with our website and allow us to remember you. We use this information in order to improve and customize your browsing experience and for analytics and metrics about our visitors both on this website and other media. To find out more about the cookies we use, see our Privacy Policy.
I Accept I Decline