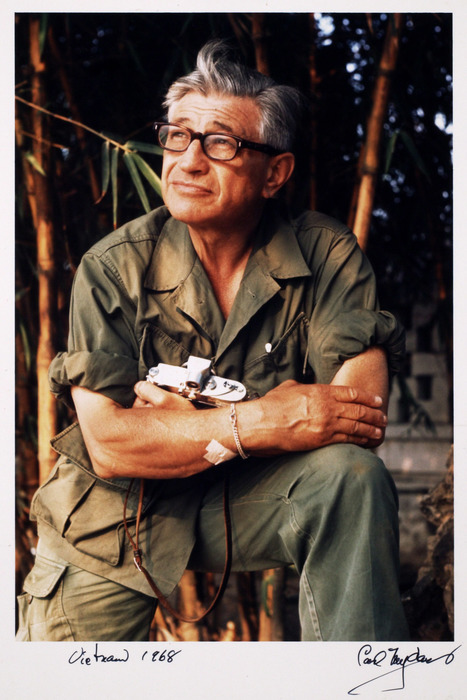 Carl Mydans prepared himself from an early age for his lifelong involvement with journalism, whether it was to be with words or with photographs. Born and raised in Boston, he earned a B.S. degree from the Boston University school of Journalism in 1930. Mydans's career as a journalist began with freelance work for the Boston Globe and the Boston Post. He continued as a staff writer for the American Banker, a New York Wall Street daily.
In 1931 Mydans acquired a 35mm camera and entered the world of photojournalism, becoming one of a new breed of reporter: those who know how to handle the typewriter and the camera alike. Observant by nature, Mydans was now able to translate into the visual what was sometimes difficult to describe with words alone.
He obtained his first important photographic assignment in 1935 after he had joined what was to become the Farm Secruity Administration (FSA). He began work as a photographer under the leadership of Roy Stryker, who assigned Mydans to document the cotton industry in the South. Besides recording the facts of that industry, Mydans photographed compassionately the lives of those who suffered, the dispossessed and the exploited, setting a pattern to be followed by many other photograhers who worked for the FSA.
Mydans's stay with the FSA was brief. In 1936 he was hired as one of the four photographers to help launch Life magazine; he remained an active staff photographer until the magazine closed in 1972. Those 36 years, during which he covered major news events in the United States, Europe, and Asia, were the most important years in his career.
During World War II, Mydans photographed England preparing for attack, Italy under Mussolini, the Finnish campaign against Russia, Belgian refugees streaming into France, and France at war in 1940 and again in 1944 during the advance of the 5th U.S. Army. Between 1940 and 1944, Mydans and his wife Shelley, a former Life researcher, were in Asia, first covering Chungking in its stand against the Japanese bombings, then in Burma, Malaya, and the Philippines. In the Philippines they were both captured by the Japanese and imprisoned for 21 months. They were released to US authorities in exchange for Japanese prisoners.
In 1944, after a short time in Europe, Mydans was assigned to General MacArthur's command in the Pacific, during the reconquest of the Philippines. At the war's end, Mydans was chief of the Time-Life news bureau in Tokyo for four years; he went on to cover the war in Korea, then was stationed for several years in England, and for a year and a half in Moscow.
After Life ceased to exist, Mydans continued his work as a photojournalist, handling assignments from Time, Fortune, Smithsonian Magazine, and many other publications. He published several books, one co-authored by his wife, and in 1951 he was the recipient of the US Camera Gold Achievement Award.
International Center of Photography: Encyclopedia of Photography. New York: Crown Publishers, Inc., 1984, p. 351