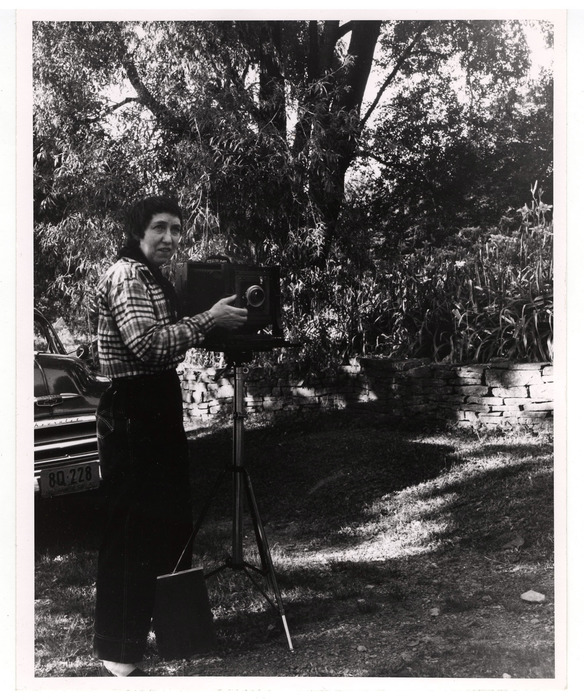 Born in Springfield, Ohio, Berenice Abbott spent the early part of her artistic career studying sculpture in New York, Berlin, and Paris, where she worked as Man Ray's studio assistant. This experience led her to photography, and in 1926 she established herself as an independent photographer whose portraits of well-known artists and writers rivaled those of Man Ray in excellence and renown. Through Man Ray, she met Eugène Atget, whose photographs of the transformation of Paris from the ancien regime through the mid-1920s impressed her with their methodical technique and intuitive inflections of artistry. Upon Atget's death, Abbott purchased his photographic oeuvre, and for more than forty years tirelessly promoted his work. It is largely through her efforts that this great photographer is still known today.
In 1929, Abbott returned to the United States, where she embarked on her best-known body of work--a documentation of New York City for which she developed her famous bird's-eye and worm's-eye points-of-view. She worked on the project independently through the early years of the Depression, and in 1935, secured funding from the Federal Art Project (a part of the Works Progress Administration). Her pictures were published as Changing New York (1939), which was both critically and commercially successful; it remains a classic text for historians of photography.
One of Abbott's later final projects was an illustration of scientific phenomenon, produced in the 1950s in collaboration with the Physical Sciences Study Committee based at the Massachusetts Institute of Technology. Although not as well known as her New York work, these pictures are exquisite examples of her acumen for technical experimentation and her natural instinct for combining factual photographic detail with stunning artistic accomplishment. With their clear visual demonstration of abstract scientific principles, the photographs were chosen to illustrate physics textbooks of the 1950s and 1960s.
Lisa Hostetler
Handy et al. Reflections in a Glass Eye: Works from the International Center of Photography Collection, New York: Bulfinch Press in association with the International Center of Photography, 1999, p. 206.
References:
Haaften, Julia Van. Berenice Abbott, Photographer: A Modern Vision: A Selection of Photographs and Essays. New York: New York Public Library, 1989.
Yochelson, Bonnie. Berenice Abbott: Changing New York. Exhibition catalogue. New York: Museum of the City of New York, 1997.