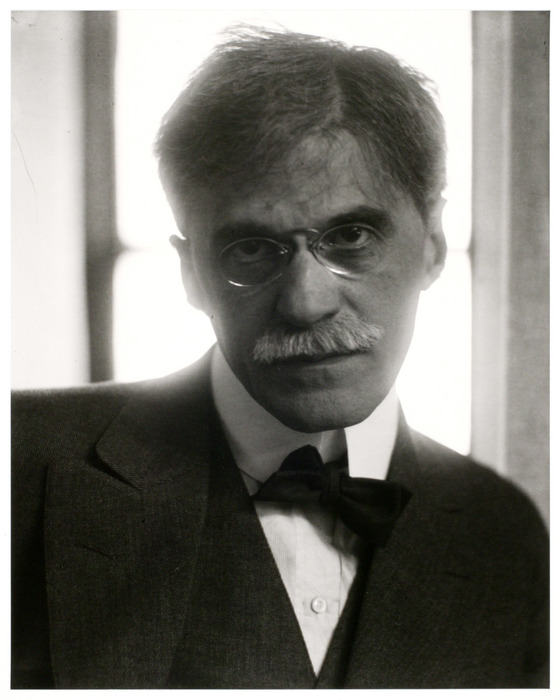 Alfred Stieglitz played a seminal role in the development of art photography and the dissemination of modern art in the United States. Not only did his photography revolutionize the medium, but his intellectual and cultural leadership was largely responsible for the success of important American artists such as Georgia O'Keeffe, Marsden Hartley and Paul Strand. Stieglitz's promotion of fine-art photography was vital to the international acceptance of the medium's aesthetic value.
Stieglitz was born in Hoboken, New Jersey, in 1864 and moved with his family to Germany in 1881, where he studied engineering at the Polytechnikum in Berlin from 1882 to 1885. By 1883 he had developed a profound interest in photo-chemistry, which led him to purchase his first camera. From 1886 to 1890, Stieglitz traveled throughout Europe making photographs, organizing exhibitions, and winning photographic competitions. He returned to the United States in 1890 and became involved in the New York amateur photographic community. He pioneered techniques for making photographs during a snowfall, in the rain, and at night. Dissatisfied with the lack of serious artistry in most of the photography he saw, Stieglitz organized an exhibition, Photo-Secession, at the National Arts Club. That same year he began publishing Camera Work, which became a forum for presenting the images and ideas of the Photo-Secessionists. In 1905 he opened The Little Galleries of the Photo-Secession, the first in a series of four galleries he would direct in New York--"291," The Intimate Gallery, and An American Place. The opening of "291" signaled a new phase of Modernism in Stieglitz's photography. Inspired in part by the contemporary European art he showed there, including works by Picasso and other members of the avant-garde in prewar Paris, his own photography passed from Pictorialism through formalism to his symbolic "Equivalents" and finally to a series of late city pictures.
Lisa Hostetler
Handy et al. Reflections in a Glass Eye: Works from the International Center of Photography Collection, New York: Bulfinch Press in association with the International Center of Photography, 1999, pp. 228-29.
Archived Items
Sort by
No results found.
Try another search or browse ICP.
View More
This website stores cookies on your computer. These cookies are used to collect information about how you interact with our website and allow us to remember you. We use this information in order to improve and customize your browsing experience and for analytics and metrics about our visitors both on this website and other media. To find out more about the cookies we use, see our Privacy Policy.
I Accept I Decline