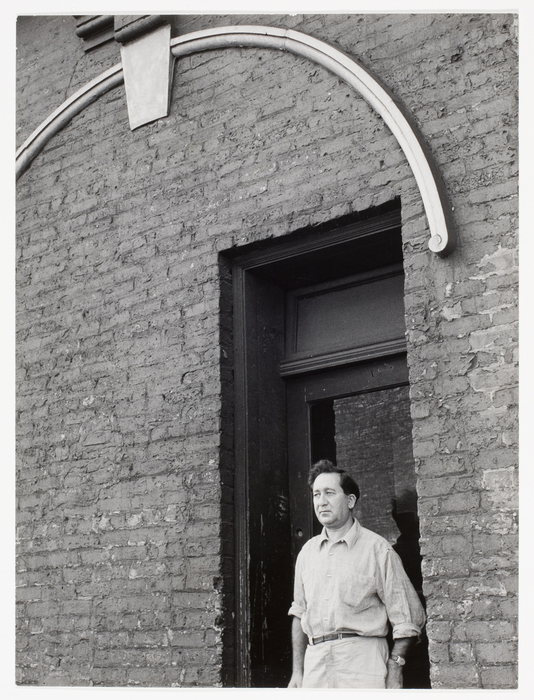 Born in New York City, Aaron Siskind graduated from the City College of New York in 1926 and taught high school English until he became interested in photography in 1930. In 1933 he joined the Film and Photo League in New York, a group of documentary photographers devoted to improving social conditions in contemporary society through their pictures. While involved with the League, Siskind made some of his most successful and well-known documentary photographs, including those for The Harlem Document (1937-40), but he had a falling out with the organization in 1941. At the time, his work was assuming a new, more abstract focus, as evident in Tabernacle City, a series of photographs depicting the vernacular architecture of Bucks County, Pennsylvania. When his exhibition of this series at the Photo League caused many members to protest his photography outright, he left the organization and found support among Mark Rothko, Franz Kline, and other painters, who recognized his elimination of pictorial space and his concentration on the arrangement of objects within the picture plane as qualities aligning his work with their own. Siskind's photographs have been widely exhibited and he won many awards for his photography, including a Guggenheim Fellowship, and the Distinguished Photography Award from the Friends of Photography. Siskind was a photography instructor at Chicago's Institute of Design and served as head of the department there from 1961 to 1971.
Siskind's abstract photographs from the late 1940s and early 1950s were a major force in the development of avant-garde art in America. In rejecting the third dimension, this work belied the notion that photography was tied exclusively to representation. As such, Siskind's work served as an invaluable link between the American documentary movement of the 1930s and the more introspective photography that emerged in the 1950s and 60s.
Lisa Hostetler
Handy et al. Reflections in a Glass Eye: Works from the International Center of Photography Collection, New York: Bulfinch Press in association with the International Center of Photography, 1999, p. 228.
Archived Items
Sort by
No results found.
Try another search or browse ICP.
View More
This website stores cookies on your computer. These cookies are used to collect information about how you interact with our website and allow us to remember you. We use this information in order to improve and customize your browsing experience and for analytics and metrics about our visitors both on this website and other media. To find out more about the cookies we use, see our Privacy Policy.
I Accept I Decline