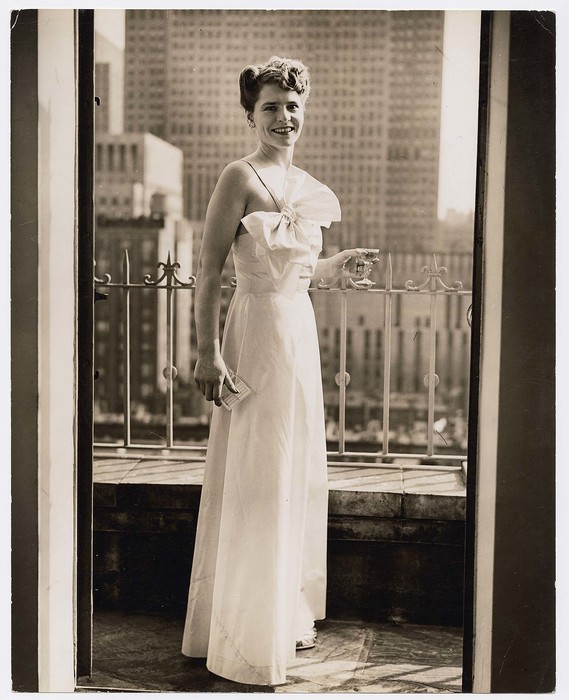 Margaret Bourke-White was born in New York City and attended the Clarence H. White School of Photography in 1921-22. After graduating from college in 1927, she pursued a career in photography and opened a photography studio in Cleveland. The industrial photography she did there brought her work to the attention of Henry Luce, the publisher of Fortune, who hired her in 1929, and the next year sent her to the Soviet Union, where she was the first foreign photographer to make pictures of Soviet industry. She photographed the Dust Bowl for Fortune in 1934; this project led to the publication of You Have Seen Their Faces (1937), which documented the human aspects of the Depression and featured text by Erskine Caldwell. In the fall of 1936, Henry Luce again offered Bourke-White a job, this time as a staff photographer for his newly conceived Life magazine. Bourke-White was one of the first four photographers hired, and her photograph Fort Peck Dam was reproduced on the first cover. Over the next several years and throughout World War II, Bourke-White produced a number of photo essays on the turmoil in Europe. She was the only Western photographer to witness the German invasion of Moscow in 1941, she was the first woman to accompany Air Corps crews on bombing missions in 1942, and she traveled with Patton's army through Germany in 1945 as it liberated several concentration camps. During the next twelve years, she photographed major international events and stories, including Gandhi's fight for Indian independence, the unrest in South Africa, and the Korean War. Bourke-White contracted Parkinson's disease in 1953 and made her last photo essay for Life, "Megalopolis," in 1957.
Margaret Bourke-White's photojournalism demonstrated her singular ability to communicate the intensity of major world events while respecting formal relationships and aesthetic considerations. She was one of the most respected photojournalists in the country during the 1930s and 40s, and her documentary work was among the most popular of its day.
Lisa Hostetler
Handy et al. Reflections in a Glass Eye: Works from the International Center of Photography Collection, New York: Bulfinch Press in association with the International Center of Photography, 1999, p. 209.
Archived Items
Sort by
No results found.
Try another search or browse ICP.
View More
This website stores cookies on your computer. These cookies are used to collect information about how you interact with our website and allow us to remember you. We use this information in order to improve and customize your browsing experience and for analytics and metrics about our visitors both on this website and other media. To find out more about the cookies we use, see our Privacy Policy.
I Accept I Decline