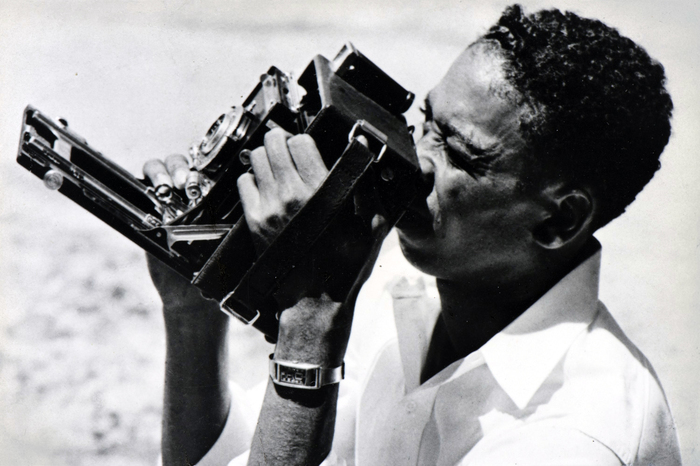 
Benny A. Joseph, Houston, Texas professional photographer, was born December 10, 1924 in Lake Charles, Louisiana. Joseph’s family moved to Houston and he was raised by his mother. He attended Yates Junior High and High School in Houston and served in the U.S. Army during the Second World War from 1943 to 1945 and was stationed in England and France.
After the war Joseph attended the Teal School of Photography in Houston from 1946 to 1947 and subsequently pursued commercial photography. From 1950 to 1953 he worked with Herbert Provost, another African American photographer, and later opened his own studio in July 1958. Primarily a portrait photographer, he maintained the same studio until July 1968 when he relocated, keeping that studio until 1982.
During his career photographing the Houston African American community, Joseph shot ordinary people as well as many noted entertainers, civic leaders, and political figures. Celebrities and leaders represented in the collection include Dr. Martin Luther King, Jr., Thurgood Marshall, Barbara Jordan, and Muhammad Ali. Much of Joseph’s music-related photography was done for the Buffalo Booking Agency, radio station KCOH-AM, and for Don Robey. In assignments for Don Robey, owner and producer of the Houston-based Duke and Peacock labels, Joseph photographed such notables as B. B. King, Junior Parker, Bobby Bland, Buddy Ace, and Clarence “Gatemouth” Brown. He also documented racial discrimination for the NAACP, as well as dances, black-owned businesses, and religious activities in the Houston area.
Benny Joseph and Hattie Calbert were married in 1953 and had four children. He is a member of Phi Beta Sigma service fraternity. Joseph’s work is explored in depth in The Early Years of Rhythm and Blues (Houston: Rice University Press, 1991). An oral history with Joseph and examples of his work appear in Portraits of Community: African American Photography in Texas (Austin: Texas State Historical Association, 1996).