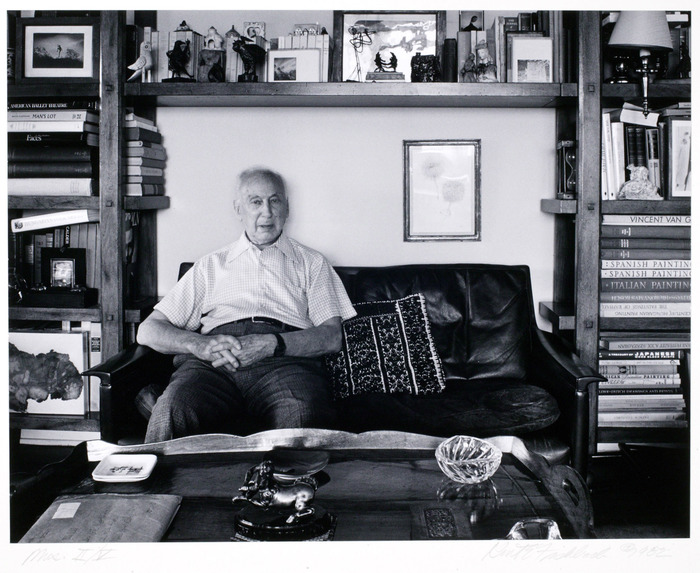 André Kertész was born in Budapest in 1894 and studied at the Academy of Commerce until he bought his first camera in 1912. He served in the Austro-Hungarian army during World War I, and in 1925 had one of his photographs published on the cover of Erdekes Ujsay. That same year, he moved to Paris, where he did freelance work for many European publications, including Vu, Le Matin, Frankfurter Illustrierte, Die Photographie, La Nazione Firenze, and The Times of London. He bought his first 35-millimeter camera, a Leica, in 1928, and his innovative work with it on the streets of Paris was extremely influential. In 1936, he came to the United States, and began freelancing for Collier's, Harper's Bazaar, and House & Garden, among other mass-circulation magazines. Eventually, and until 1962, he worked under contract to Condé Nast. Between 1963 and his death, his independently produced photographs became more widely accessible, and Kertész became one of the most respected photographers in America. His work was the subject of many publications and exhibitions, including solo exhibitions at the Bibliothèque Nationale in Paris and at the Museum of Modern Art, and a major retrospective, Of Paris and New York, at the Art Institute of Chicago and the Metropolitan Museum of Art. Among his many honors and awards were a Guggenheim Fellowship and admission to the French Legion of Honor.
Kertész's work had widespread and diverse effects on many photographers, including Henri Cartier-Bresson, Robert Capa, and Brassaï, who counted him as a mentor during the late 1920s and early 1930s. His personal work in the 1960s and 1970s inspired countless other contemporary photographers. Kertész combined a photojournalistic interest in movement and gesture with a formalist concern for abstract shapes; hence his work has historical significance in all areas of postwar photography.
Lisa Hostetler
Handy et al. Reflections in a Glass Eye: Works from the International Center of Photography Collection, New York: Bulfinch Press in association with the International Center of Photography, 1999, pp. 219-20.